VANCOUVER, BC – An Internet archive photo of the 2012 ITCCS website (Exhibit A below) confirms the testimony of whistleblower Alex Hunter in a Dec. 22, 2014 NewsInsideOut.com interview that Hunter was a Convenor/Juror of Kevin Annett’s ITCCS Tribunal. Exhibit A likewise confirms Mel Ve’s testimony in a Dec. 24, 2014 NewsInsideOut.com interview that Mel Ve was the Dutch organizer and essentially the European organizer for Annett’s ITCCS Tribunal, as the organizer listed on the ITCCS website in Exhibit A is a fictitious name George Dufort of a person that does not exist.

In Dec. 24, 2014 public statements on the ITCCS website, Kevin Annett had denied that the testimony of ITCCS Juror was factual. Exhibit A proves that Annett is engaging in false statements and lying, a consistent pattern he has exhibited in this NewsInsideOut.com investigation.

Exhibit A, an archive photo of Annett’s website from the time of the Annett’s alleged 2012 ITCCS trial of the UK queen and Pope Ratzinger, lists the following ITCCS personnel on it website:

On Christmas Eve 2014, Kevin Annett issued an “ITCCS Public Legal Notice of Criminal Defamation and Liability” against NewsInsideOut.com reporter Alfred Lambremont Webre, ITCCS Juror Alex Hunter because of the Dec, 22, 2014 broadcast, whose facts were proved by Exhibit A as there was no ITCCS Brussels and no ITCCS trial was held. The Notice stated (sic) “the You Tube corporation as well as any person who knowingly circulates the said broadcast is equally liable for prosecution under the law.”

Exhibit A confirms that testimony of Mel Ve in her Dec. 24, 2014 NewsInsideOut.com interview that she – Mel Ve (Melanie Spencer) essentially carried out the functions of ITCCS Central while based in Holland. There was no ITCCS Brussels, as the person named there by Annett on the ITCCS website, George Dufort, did not exist. Mel Ve stated, as do other researchers, that Kevin Annett signs the name George Dufort to emails to make it appear as though there is a Tribunal in Brussels.

In her interview, Mel Ve recounts her video recording the testimony of Toos Nijenhuis, Kevin Annett’s sole ITCCS public witness whom Mel Ve states is deeply flawed. According to Mel Ve, Toos Nijenhuis presented no evidence for her statements that she saw Pope Ratzinger murder a little girl and various Royals engage in pedophilia and child sacrifice and murder. According to Mel Ve, Toos Nijenhuis also changed essential facts of her statements several times during various video recordings Mel Ve made.

NewsInsideOut.com‘s correspondent Juan Lankamp, a Dutch citizen, has broadcast prior reports of the war crimes and atrocities by the Dutch Royal family, governmental and financial elite, and ritual sacrifice and child trafficking rings in Holland and other European countries.

NewsInsideOut.com’s Alfred Lambremont Webre has taken out a Protective Order and former ITCCS Convenor/Juror has notified Annett and “ITCCS” of no contact with themselves and their family for both legal and safety reasons.

“Kevin Annett claims jurisdiction under the common law,” says Webre, who if a former Judge on the Kuala Lumpur War Crimes Tribunal, a Citizen’s Tribunal of Conscience. “Yet Annett has by the evidence has committed fraud and breach of public trust with non-existent proceedings, and continues to file fraudulent common law papers, and make malicious criminal and civil law threats of prosecution based on his own demonstrated lies about ITCCS Tribunal. A Common Law Tribunal or Grand Jury cannot be convened in fraud.

“The tragedy here is that through his gross breach of trust and Tribunal fraud, Annett has set back the movement to prosecute these crimes,” Webre states.

“Child trafficking, child genocide, ritual child sacrifice, and pedophilia are real and must be stopped, most especially if carried out as a means to power by networks in government, Churches including the Vatican and Jesuits, Parliaments, Corporations, Financial institutions and families,” states Webre.

“NewsInsideOut.com will publish credible reports from witnesses and experts about these atrocities,” says Webre.

In another development, Ryan Elison of Victoria, BC has commenced an online Petition to the Nanaimo, BC RCMP for a criminal investigation of Kevin Annett’s handling of donor funds and other issues at ITCCS. Residential school survivor Wa7tsek states that RCMP told Sovereignty verifier and First Nations Stee-Mas that the RCMP had investigated Annett’s Tribunal and found it to be fictitious. Shortly after this episode, Stee-Mas was assassinated. 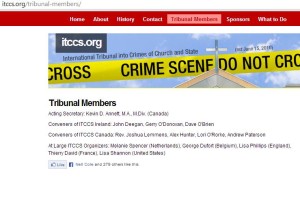 PUBLIC LEGAL NOTICE OF CRIMINAL DEFAMATION AND LIABILITY
issued against Alfred Webre, Alex Hunter and others
on 24 December, 2014 in the City of Vancouver, Canada
LET IT BE KNOWN that the contents of a public you tube broadcast issued on 22 December by Webre, Hunter and others constitutes a brutal and unprovoked act of deliberate criminal harassment and defamation, and incitement to hatred, against Kevin Daniel Annett by Webre, Hunter and others, who are accordingly liable for criminal prosecution under the law; and

LET IT BE FURTHER KNOWN that the You Tube corporation as well as any person who knowingly circulates the said broadcast is equally liable for prosecution under the law; and

LET IT BE FURTHER KNOWN that unless the offending broadcast is immediately removed from you tube and a public retraction and apology  for its contents is issued, these persons and corporation can and will be named in a common law court action as part of a Citizens’ Grand Jury to be convened in the City of Vancouver on January 15, 2015.

Issued by the International Tribunal into Crimes of Church and State (ITCCS) and Kevin Daniel Annett, acting under the authority of the common law.

WATCH ON YOU TUBE: