VANCOUVER, BC – In her new book on the legitimacy of the Windsor family to the UK Crown [Saints or Sons of Perdition: UKs George V & Edward VIII], US citizen Emily Elizabeth Windsor-Cragg, the reported daughter of UK King Edward VIII (1994-1972),  has documented her case that World War II was a False Flag operation constructed around three half brothers. One half-brother, King Edward VIII, was the sitting UK monarch in 1936. The second half-brother was Adolph Hitler, then German Chancellor, and illegitimate son of King George V,  born out of an occult Order of the Bath ritual. 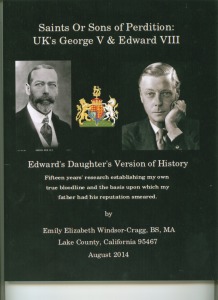 As their principal honey trap in this long-term coup, the Royal Family Freemason faction uses Wallace Simpson, an MI5 double agent. Wallace Simpson has served as the confidential intermediary between father King George V and son Adolph Hitler when Hitler frequented England as a youth.

Ms. Windsor-Cragg documents her inside the “Windsor” family story with 15 years of photographic research and 17 years experience as a photo analyst (including 5 years at Xerox). She refutes one long-standing theory that Hitler was the illegitimate son of a Rothschild.

Author Windsor-Cragg makes the case that the coronation of Elizabeth II’s father, King George VI on May 12, 1937 was unlawful. George VI’s coronation was obtained through a fraudulent MI5 psychological warfare operation practiced upon the innocent King Edward VIII by the MI5 double agent Wallace Simpson acting on instructions from MI5, Edward’s half-brother (who wanted to be King George VI) and the Freemason faction of the Royal family who wanted control of the UK Crown.

As King George VI’s coronation was procured by official fraud and not lawful, so too the coronation of Elizabeth II on June 2, 1953 was not lawful. As a reflection of the lack of legitimacy of Elizabeth II as a UK Monarch, Author Windsor-Cragg notes that Elizabeth II has now been adjudged guilty of child genocide by the International Tribunal for Crime of Church and State (ITCCS.ORG).

The UK Throne is vacant as a matter of law and awaits its rightful heir.