VANCOUVER, BC – John Martin is the flower of America’s classical guitarists who has played at official events for President Jimmy Carter in the United States and in Europe. President Jimmy Carter has written of John Carter’s music, “Rosalynn and I want to tell you how much we have enjoyed your superb performances, both in public and our private visits.” Listening to John Martin play Recuerdos de la Alhambra is reminiscent of Andres Segovia. Access this link and you will know to what I refer: http://www.reverbnation.com/johnmartinclassicalguitarist

In his NewsInsideOut.com interview, John Martin also describes how when Jimmy Carter and he were together at a function in Europe, they each shared openly with each other in private about their respective UFO experiences. Both Jimmy Carter and John Martin have each filed UFO reports describing their encounters.

Jimmy Carter as a UFO/ET Abductee

With this background, the multidimensional contacts that John Martin describes in his interview and documents in his photo and UFO reports are of deep interest as a context communication, not only to John Martin, but also to and about his UFO friend Jimmy Carter, and by extension, all of humanity.

In this light, I have written, “If in fact – as the multiple-source evidence set out above establishes – U.S. President Jimmy Carter became a UFO/ET Abductee sometime (1) around his initial 1969 Close Encounter of the First Kind during the preparatory phases of his run for Governor of Georgia; and/or (2) during his term as Governor of Georgia when he made his personal 1973 UFO report; and/or (3) during his 1976 campaign for the Presidency of the U.S. when he “came our of nowhere” to beat Gerald R. Ford and become U.S. President on a Disclosure platform; and/or (4) during his “Disclosure Debacle” term as President of the U.S. 1977-1981; and/or afterward as Director of the Jimmy Carter Centre.

“If Jimmy Carter is a UFO/ET abductee, as the threshold evidence suggests, one question is which ET civilization may have been the abducting party – the “Educational Outreach” civilization.

“Was it the Short Greys, as Jim Sparks experience suggests, or some other ultra-dimensional or human-form ET civilization.

“The probable reality that President James Earl Carter is a UFO/ET Abductee, and was such at key points during his public career leading up to his campaigns for Governor of Georgia and President of the United States (1976) have important implications for the nature of Exopolitical relationships and interventions in high-level political affairs.

“UFO/ET Abduction research indicates that selected abductees may be debriefed on high-level matters such as the state of the Earth’s environment and forthcoming political and social events of world consequence.

“If we take the hypothesis that Jimmy Carter is a UFO/ET Abductee, and realistically attempt to flesh out what his abduction experiences may have included, it is not out of the realm of possibility to include in-depth downloads concerning the nature of the Extraterrestrial presence on Earth, its relationship to secret “ET-human liaison program within the U.S. military-intelligence (as documented by Jim Sparks), and the dynamics of a plan for disclosure during his coming Presidential administration.

“Hypothetically, Carter’s experiences during the ET/UFO abductions may have included teleportation, time travel, and an intimate experience of these secret ET-human liaison programs, as detailed in Jim Sparks accounts. In other words, in the UFO/ET abductions, the ETs could have been preparing Jimmy Carter along a parallel consciousness track for a proposed Disclosure role as U.S. President, unbeknownst to Carter’s terrestrial handlers at the Rockefeller Trilateral Commission level. Jim Sparks’ account of the Short Greys is that they feel that the U.S. Administration has violated all of the environmental and human rights aspects of their secret agreements, and are not in accord with the Rockefeller Trilateralists, and City of London Zionists that have privatised and attempted to impose the ET Truth embargo for 60 years.

“As director of the 1977 proposed Carter White House Extraterrestrial Communication Study, I can comprehend in retrospect a possible Abduction-facilitated mechanism by which a single determined Stanford Research Institute futurist could put together a world-class scientific proposed study at the level of the U.S. Presidency in the space of several months in the Spring and Summer of 1977, while a multi-track pattern of other Carter-related Extraterrestrial Disclosure studies, such as those initiated by Daniel Sheehan and Marcia S. Smith, could unfold.”

Context communication to John Martin for Jimmy Carter and the World

In his interview, John Martin discusses several UFO sightings that appear to fit the profile of context communications by the intelligence behind the sighting.

Each of these sightings followed John Martin’s sitting on the balcony of his townhouse playing classical guitar into the courtyard, a favorite of Jimmy Carter, a champion of world peace.

The UFOs that John Martin sighted included (1) a Cross (symbol of Christ – See Flying Cross Below, an example); (2) A Crescent (Symbol of Islam); and (3) A Heart-shaped Cloud (Symbol of Love – Photo of actual Heart-shaped cloud left by the ET intelligence). 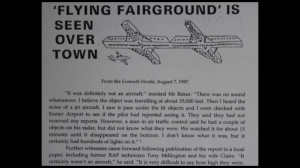 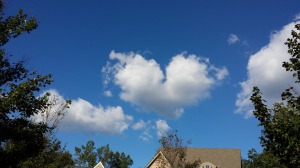 Jimmy Carter’s courageous stance on behalf of the Palestinians is well known, especially in is most recent book Peace Not Apartheid. Carter writes, “Israel’s continued control and colonization of Palestinian land have been the primary obstacles to a comprehensive peace agreement in the Holy Land.”

To this Exopolitical observer, these UFO sightings are a profound context communication by the intelligence behind them to John Martin, to Jimmy Carter and to all of us directing humanity to look at Christ and Islam through the collective lens of Love.

Excerpts of this article can be re-posted as long as credited & a link leads back to NewsInsideOut.com. Thank you.

UFO Studies Done and Proposed by the Carter Administration