Credo Mutwa: My vision is peace in the world. I blame myself for Michael Tellinger & Zulu Planet’s malfeasance on their contract

KURUMAN, SOUTH AFRICA – On a sofa in his home in rural Kuruman, South Africa Credo Mutwa, South African Zulu sangoma or traditional healer, author, and prophet, sits next to Virginia Mutwa whom he calls his sister wife.

As an author, Credo Mutwa is credited with co-writing “The Reptilian Agenda” series with David Icke.

“My grandfather said never blame other people, you have yourself to blame,” Credo said when asked of the current controversy as to whether publisher Michael Tellinger of Zulu Planet has honored his March 27, 2010 contract with Credo Mutwa to produce and distribute a DVD of a September 2008 video-recorded talk between Credo Mutwa and Tellinger and “pay Credo Mutwa 50% of all NETT profit from the sales of the DVD/interview.” [Ed. Note – See Contract below Appendix I]

Asked if he had ever received any money from Tellinger under the contract for sales of the DVD, Credo Mutwa looked at Virginia and both stated emphatically, “No.”

Credo & Virginia Mutwa’s response that Michael Tellinger and Zulu Planet Publishers have never provided them a proper accounting or payment under the contract is confirmed in this interview. Michael Tellinger’s statements that not a single DVD was sold in the almost five year term of Credo & Virginia’s contract is not credible absent a proper accounting, as was done in the case of Planet Zulu author Johan Engelbrecht, the author of the book, Kaffertjie published by Zulu Planet. 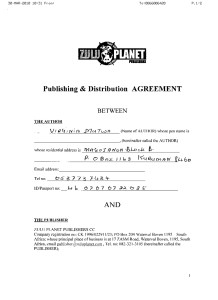 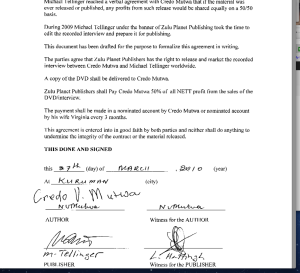