You are here: Home / Channeling ETs / “GEORGE” Interdimensional ET: “We are helping in your frequency ascension through Contactees, Psychics, and talk show hosts”

“GEORGE” Interdimensional ET: “We are helping in your frequency ascension through Contactees, Psychics, and talk show hosts”

VANCOUVER, BC – In a telepathic interview with “George”, a 13th dimension Interdimensional ET in communication with Contactee Ray Kosulandich and psychic and radio show host Dr. Sam Mugzzi, George let it be known that he and other upper-dimensional ethical, Interdimensional ET entities are assisting in humanity’s frequency ascension at this time by communicating and intervening in radio and online video programs with useful information and “frequency boosts”.

Visitations by George & the Fabulous 4

In a previous ExopoliticsTV interview with Alfred Lambremont Webre, multigenerational ET Contactee Ray Kosulandich, whose family ET contacts span his grandfather, father and himself, revealed drawings of the 32 species of mainly hyperdimensional ETs that have visited him, each bringing a consistent message of a coming positive transformation of human consciousness.

Mr. Kosulandich also indicated he is visited and briefed on a regular basis by four ETs he calls his “Fabulous 4”. George is seen in the drawing in Figure A below of the fabulous 4 during a visit with Ray Kosulandich as the 10 foot tall “Elephant Man” to Ray’s left around the table. 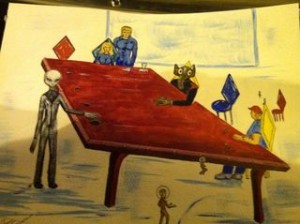 FIGURE A – Fab Four: George is Elephant Man to the left of Ray Kosulandich. It is not known if “George” is related to the interdimensional ET known as the Hindu god Ganesh.

In the Hindu cosmology, Ganesh is a deity with an Elephant head, known as the remover of obstacles (or placer of obstacles before those who need to be stopped). Exopolitics has now revealed that many entities depicted as deities in human religions may in fact Interdimensional ETs.

Author Janet Kira Lessin: ETs told me “You are going to do something very important for humanity”

David Wilcock: Descendants of Giant species are the High Cabal and hidden controllers of humanity, can appear as Homo Capensis