VANCOUVER, BC – Dolores Temple and a fellow mother who home schooled their three male children who were on their way from Jacksonville, Fla. to Kansas on March 3, 2013 by car to take up jobs that Dolores Temple had arranged for the youths appeared in NewsInsideOut.com interview 2 years to the day after their children had been unlawfully profiled and detained by Ferguson MO area police in a false arrest-false conviction-profit prison scheme.

One of their children, Stephen Temple (24) has been imprisoned and tortured since 3/3/13 on false cannabis charges for claiming his constitutional rights during this unlawful profiling.

When their vehicle was profiled and stopped by twelve police squad cars at the hidden and notorious St. Charles, MO police ambush and kidnap area, Stephen Temple asked the arresting police officer, “Are you sworn to uphold the Constitution?”

For that legitimate question Stephen Temple has been subjected to 2 years of near death torture, including 71 days naked in solitary with no sunlight with his eyes and body smeared with Mace. His eyes and health have been ruined.

Stephen Temple and the mothers have exposed a Ferguson MO area syndicate of police, public defenders, courts, and profit prisons that preys on out-of state vehicles passing through nearby St. Charles, MO.

Stephen Temple and the mothers have seen Stephen (who has lost over 100 pounds) threatened continuously through torture for two years on trumped-up, false marijuana charges. The corruption of this Ferguson, MO area law enforcement-profit prison syndicate is such that the mother’s testimony as to police behavior and even fingerprint-related documents signed by the police showing corruption in Stephen’s case were unlawfully struck from the court record and not permitted to be shown the jury.

Dolores Temple writes, “For example, Notice how two Governors send me a response letter stating that they can not interfere with courts and then write a Governor’s Warrant – in which an entire MO docket was stripped from public view to be secretly manipulated leaving Stephen without due process. UNHEARD OF.
I also have 30 witnesses who are willing to testify to the abuse on Stephen, whom they, and several Missouri.”

In a related development, “Ferguson, Missouri and a second St. Louis suburb are being accused in separate lawsuits of operating a “debtors’ prison scheme,” illegally jailing poor people who are unable to pay traffic tickets or fines tied to other minor offenses.

“The lawsuits, filed on Sunday in U.S. District Court in St. Louis by 20 black residents, allege that officials in Ferguson and neighboring Jennings have routinely been abusing and exploiting impoverished individuals to boost city revenues. The plaintiffs are seeking class-action status for the cases.” 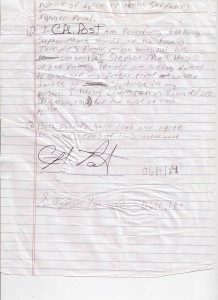 January 2015 Officer Marjorie Bentz, Supervisor of Northeast Correctional Center – threatened Stephen that if he did not sign the release he would be here indefinitely. She grabbed the document from him and only read the parts she thought he should know. Yelling and screaming at him that she had control over his life. He asked for an attorney, or counsel or audio or video of this meeting. Stephen asked for her name and bond number all refused.

Stephen had blood work done and it found that his vitamin D was a 4 (normal is 300).

September 2013 Stephen put in hole for 71 days. No change of clothes. In underwear only, green stuff growing on his back.

Sept. 2013 Broke Stephens wrist, forearm. X rays were taken and showed the break.   They refused to set. Stephen had to use a sock and other things in cell to set.

6/8/13 5 min call. Stephen was drugged through food for three days again, not given meals or water. without daily hour from cell. Shaved his eyebrows.

5/23/13 Stephen calls and tells us he was put in Unit J drugged through his food for three days.NO INCIDENT REPORT AND NO REQUIRED HEARING.

5/20/13 POISONED Stephen calls us and has audible signs of poisoning. says he is bluish, cant feel feet or fingers, sounds giddy.

4/10/13 FIRE!! “YOU WILL ALL DIE IN CELLS”. After a day with no air conditioning and only 8oz. of water a day the Officers lock all inmates (26) in there cells tell them there is a real fire (fire alarm sounds). They call family members to say there goodbys

4/6/13, 4/7/13, 4/8/13 ALL WEEKEND NO WATER FOR ALL INMATES. Officer says they had to stop them from trying to get water from shower faucet. NO AIR CONDITIONING. In mates have to breath under door laying down on floor all night.

3/22/13 Officer Herdnon threatens Stephen with a knife to take out “every one of those pretty little teeth”.

3/19/13 Officer threatens Stephen that if he doesn’t sign he will kill him and his family “MARINE STYLE”.Also threatens a family friend with same style of killing Report made to governor Jay Nixon.

3/8/13 Officer Meyers and Cross threaten to put Stephen on the rack, starve him and let the rats eat at him.