You are here: Home / Alfred Lambremont Webre / Moret & Battis: EMF War Against Humanity From Nazi Germany Started in 1945 and is global now

Moret & Battis: EMF War Against Humanity From Nazi Germany Started in 1945 and is global now

This Panel is part of an ongoing series on the history, nature and methods of AI Artificial Intelligence’s attempts to takeover Earth, nature, humanity, and spiritual processes.

VANCOUVER. BC – In this NewsInsideOut.com Panel with Alfred Lambremont Webre, independent scientist Leuren Moret, MA, PhD, ABD and military historian Laurens Battis set out the history of patents starting in 1945 that demonstrate a sustained EMF war against humans, and includes mind control, and use of EMF against biological systems.

The Panel covers the following areas: 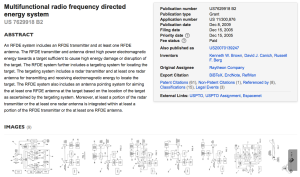 PART 2:  OTHER PATENTS AND SIGNIFICANCE:
Larry will explain these technically and the significance:
– Transfer from binary system that was large and cumbersome/big power needed, and had to be positioned on a Navy ship (RFDE = LaWS),
– scaled down w increased power to a
–  system locally available within the civilian power grid AND
– financed by victim population/target, and
– called telecommunications as a hand held device and CELL

SUMMARY:
***scaled down and in electric grid, victims financed it, sophisticated acquisition system.

***On the flip side, it has gotten to the point w phased array antennas (pizza box antennas) in personal devices they are being widely deployed and now individual cellphones can have 10 antennas in one device and quite programmable across frequency band and direction. Cell phones now are computers and started w I-phones and when IOS Android came out.

–  GLOBAL ELECTRIC GRID AND GLOBAL WI-FI: Recent news reports that a global electric grid is planned, and global wi-fi
will be transmitted from hi altitude drones without permission from world governments.

THIS EMF WAR AGAINST HUMANITY ALL STARTED AT THE END OF WORLD WAR II FROM NAZI GERMANY AND ITS GLOBAL NOW.

Chancellor Linda P.B. Katehi, an electrical engineer whose cell phone, radar and antenna circuits are used in signal transmitting, receiving and processing, has been named a charter fellow of the National Academy of Inventors. Read more in Laurels.  The 101 fellows hold more than 3,200 U.S. patents. Katehi has 19 (click on the patent number for more information . . . )

Every individual appears on ExopoliticsTV in their own Sovereign right and the opinions expressed are their own and do not reflect any views and policies of ExopoliticsTV and by their participation in this interview they do not espouse the opinions of others on the program. Thank you.