At dusk as the sun set I sat about 20 feet from the water on a log on the beach enjoying the natural beauty, watching others who wandered by on the beach in front of me with their dogs. 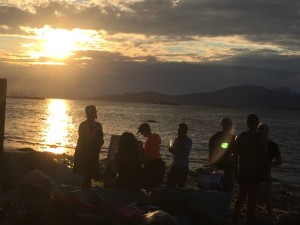 Suddenly to the right of me a very different figure appeared, clearer and more defined than the passers by, looking like a Senior Production Assistant from the set of a motion picture. The movie the “Truman Show” came to mind as I was watching the figure approach me.

The figure was male, about 45 years old, nerdy, dressed sharply in black socks and runners, black shorts, and a black short-sleeved shirt.

He was about 30 feet away from me, and stopped, looking straight at me. He looked more like a clone than a human, with a “manufactured” aspect.

The figure stopped and slowly turned around to reveal in large white lettering the following lettering written on the back on his shirt: “MARSHALL”. After pausing with his back towards me, he walked slowly away from me down the beach toward the direction from which he had first appeared.

My interpretation was that “Marshall” referred to the cloning centers described by Donald Marshall and that this figure was an example of a clone from such a center.

On reflection and after consultation with researchers and clone experts, I interpreted my experience of meeting the apparent clone as a specific intentional technological intrusion into my timeline and my perceptual reality by some intelligence wanting to teaching and brief me as an investigator and reporter on AI artificial intelligence and clones.

What I learned from this experience is as follows:

Perceptual Holographic Insertions – My experience of the clone at the beach was created by remote neural influencing technology to insert a parallel individual and/or realities into my consciousness along side my normal waking reality.

The clone that I perceived on the beach felt holographic and artificially generated and not anchored in reality with a living Core. It may have an artificial Soul, a technology that was perfected in the mid-1990s according to cloning expert Shane The Ruiner.

Hypothesis: My working hypothesis is that the reported “Cloning Centers” that may well be in the nature of these technological remote neural holographic inserts into the normal waking reality.

These “Cloning Centers”, their inhabitant clones, and their activities may be consequently technological holographic constructs without a Living Core, but with artificial Souls.

The author Philip K. Dick also reports having similar experiences as I had with the clone at the beach, though in his version the “clones” he meets are characters in his novels.

Kyra Kelm comments as follows: “Fascinating take on your insertion story with the Marshall t-shirt message. If we use a graphic analogy with your observation that this insert was “clearer and more defined than the passers by”, would it be safe to say that it was at a higher pixel resolution, or a different density than the organic life around you?

“This also brings to mind something that Dolores Cannon and Guy Steven Needler have said — that a large percentage of the people who fill the scenes in our holographic life experience are not “real” but are actually back drop people. We unconsciously create them as extras to fill our movies, and they are just energy; holographic representations.

“?Many years ago, prior to Cannon’s books and any mention by Needler of “back fill people”, Carlos Castaneda noted in his book, “A Separate Reality” that Humans have a luminous egg-like energy field around them, and yet there are others that don’t have this as they are not [real] people although they take Human form.

“Sensing if a person has this luminous field around them or not may be a method to discern who is real.

“You had a “man in black” (albeit, in sportswear) appearance that almost seemed taunting. As if it was saying Marshall was their property, and they [he] were walking away from you. And then his [Donald Marshall’s] snarky “windbag” remark came later.

“This is certainly fun to observe. I think you are also having fun.”