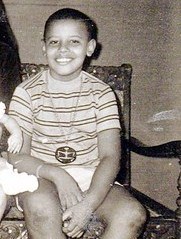 VANCOUVER, BC – In a May 17, 2011 interview with George Noory on Coast-to-Coast AM, Andrew D. Basiago, a childhood participant from 1968-72 in DARPA’s secret quantum access Tesla-technology time travel Project Pegasus, stated that U.S. President Barack H. Obama has been pre-identified by Project Pegasus as a future U.S. president.

Mr. Basiago confirmed that by the time he had personally met Mr. Obama in Los Angeles in 1982, Mr. Obama stated he knew he was going to be a future U.S. President. Mr. Obama, a student at Columbia University, was then visiting former classmates from Occidental College in Los Angeles.

Mr. Basiago has described how as a child serving in Project Pegasus in the early 1970’s, he was present at lunches held at La Hacienda restaurant in Old Town Albuquerque, NM that were attended by project principals and future American presidents, including George Bush, Bill Clinton, and George W. Bush, shortly after they were informed that Project Pegasus had found via quantum access that they would one day serve as President.

Mr. Basiago revealed that Project Pegasus was able to identify Jimmy Carter, who was then Governor of George, in 1971, as a future U.S. President. The program was in possession of a copy of the Universe Books edition of Exopolitics: Politics, Government and Law in the Universe by Alfred Lambremont Webre, a book that this reporter would not write until 2005, but which bears a quote on its front pages of a statement made by President Jimmy Carter.

This article was originally published in May 2011 at:

The article was unlawfully unpublished by Examiner.com and contractors of the U.S. government as part of a censorship campaign to hide from the public President Barack Obama’s participation in the secret DARPA/CIA time travel pre-identification and briefing program in the U.S. Such censorship is prohibited by the First Amendment to the U.S. Constitution.