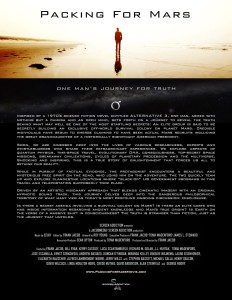 “Packing for Mars”: An Auteur Masterpiece

A review by Alfred Lambremont Webre

VANCOUVER, BC – “Packing for Mars”, Austrian filmmaker Frank Jacob’s film on the secret Mars colonies, is an auteur masterpiece in filmmaking. I am strongly urging Frank and Producer Tonia Madenford to enter “Packing for Mars” in the Vancouver and Toronto International Film Festivals. If there is any justice in the world, the film should garner an Oscar nomination for best documentary!

In fact, “Packing for Mars” is the first auteur masterpiece in the world of filmmaking related to Exopolitics, the relations among intelligent civilizations in the multiverse that I have seen in many years, perhaps since 1973 when I first started paying attention to Exopolitics. And not because I am in the film or because I played a key role as the portal into the Exopolitics world for the filmmaker. I would never over-promote a film for venal reasons. Frank Jacobs has truly exceeded expectations – with the notable exception of “Planet X and Earth organic positive timelines” – in creating a masterpiece film weaving us the audience through his search for validation of leads into the secreted world of the bases on Mars.

My Auteur review of this Auteur Masterpiece “Packing for Mars”

Filmmaker Frank Jacob starts his search for a survival colony on Mars for the elite few from Earth by mentioning he had seen interviews with the great-granddaughter of President Dwight D. Eisenhower and a person claiming to have been on Mars, as he boards a plane from Austria. Ike’s great-granddaughter is Laura Eisenhower, targeted secret Mars colonist, the Mars explorer is U.S. chrononaut and Mars jump room experiencer Andrew D. Basiago, and the interviews Frank mentions are Mars researcher Alfred Lambremont Webre’s (me) interviews with Laura and Andy on life on Mars. At the onset of the film project, Frank calls me in Vancouver, BC from Austria and I open up a Mars project portal for Frank to Laura, Andy, Tonia Madenford, Klaus Dona, Project Camelot stalwarts Kerry Cassidy and Bill Ryan, Steve Bassett, Michael Salla, Jose Escamilla, Richard Dolan, JJ Hurtak, Elizabeth Rauscher, Henry Deacon (Arthur Neumann), David Anderson, Jerry Wills, Dr. Steven Greer, Duncan O’Finioan, David Wilcock, Credo Mutwa, Linda Moulton Howe, Alan Steinfeld, George Noory, and others. Frank walks through that portal, takes a plane to meet me in Vancouver, BC and the filming begins.

Mind you, I am just one small segment of the film, speaking about Nikola Tesla, who in 1901 began the formal Exopolitical communication with the Martian civilization that eventuated in the Matrix controllers’ secret Mars colonies. [Editorial note: Tesla’s original visionary intent in making the 1902 Martian contact was eventually thwarted cut in favor of the brutal Mars Colony Corporation under the directorship of one Richard B. Cheney, whom I was to judge a war criminal in 2012 as a Judge on the Kuala Lumpur War Crimes Tribunal for his unlawful invasion of Iraq as an act of aggressive war.]

Frank artfully introduces Matrix controller depopulation themes through HAARP, vaccines, as well as Alternative 3, the supposed fictional (and very real) Matrix controller program to establish DUMBS (deep underground military bases) on Earth and colonies on Mars for survival of the Earth human civilization and DNA [Illuminati style] in Mars colonies in the event of a Planet X type catastrophe on Earth. In the film, researcher Christoforo Barbato introduces us to the Jesuit SIV (Vatican Intelligence Service) intelligence that Planet X/Nibiru may be making another destructive flyby of Earth around 2029 with concomitant cataclysmic depopulation and effects. [Readers are urged to consider an alternative parallel organic positive Earth timeline on which a Planet X destructive flyby does not occur, described in detail at www.positivefuture.info]. 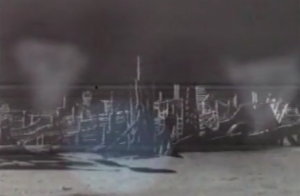 One visual highlight is the film’s public exposing, perhaps for the first time, of the joint Apollo 19 & 20 – Soviet Union secret missions to the dark side of the Moon, including secret footage of an enormous ancient structure on the moon, and footage of the still-living “Mona Lisa” ancient astronaut found on the moon.

Laura Eisenhower, who was targeted with an attempted abduction to the secret Mars colony, provides a moving overview why it is important for Earth dwellers to stand with Earth in the positive, organic timeline.

Other Mars explorers describing their Mars experiences include Henry Deacon (Arthur Neumann); Randy Cramer (via Michael Salla), and Duncan O’Finioan, who describes his piloting a “milk run” supply craft between Mars and Earth.

This is a must-see film for viewers of all ages. Screen the film these Holidays and into 2016 for yourself and your loved ones, for friends and networks. And if you are an American, vote only for a Presidential candidate who will deliver full disclosure of Life on Mars.