This is the first of a series of NewsInsideOut.com articles on the 100 Proposals of US Presidential candidate former chrononaut Andrew D. Basiago

VANCOUVER, BC – In a March 11, 2016 statement from his campaign headquarters at Charlotte, North Carolina, independent U.S. Presidential candidate Andrew D. Basiago, a whistleblower and former U.S. chrononaut and Mars explorer in the U.S. governments top secret teleportation, time travel, and Secret Space program from the early 1970s to the mid-1980s, released his platform in the form of 100 Proposals easily accessible online at

Breaking with the addiction of mainstream Presidential campaigns to performing for the mainstream media, the New Agenda for a New America outreach is to the Alternative media like NewsInsideOut.com, stating:

The President should shun the mainstream media as incompetent and embrace the alternative media.

One of the most visionary and planet-transforming of the 100 Proposals is the following Proposal in Innovation:

The President should set as the nations chief technical goal achieving global teleportation.

Among the primary requirements of an advanced space-faring species that has graduated from war and money as two of its social preoccupations is a global teleportation system, this reporter’s research has found. Global teleportation eliminates the costs of transportation of people, products, and services and promotes the emergence of an advanced planetary peaceful, moneyless society.

The 100 Proposals, according to his campaign, “entitled ‘100 Proposals — A New Agenda for a New America,’ are divided into three sections that comprise the overarching goals of Andy’s campaign for President: Truth, Reform, and Innovation. Seventeen of the proposals consist of the major elements of the Truth presidency that Andy has promised. Fully 53 of the proposals urge Reform. Thirty of the proposals indicate ways the President can foster Innovation in America. Andy has delivered in his 100 Proposals what all of the establishment candidates have failed to deliver: a written plan describing the major goals that the candidate will pursue as President.”

As an independent candidate, Mr. Basiago is pursuing a write-in strategy in the 2016 U.S. Presidential election, asking all voters to write in his name as President on the ballot. Securing ballot access in all 50 states would cost $5 million. Mr. Basiago’s campaign is securing authorization in all but a handful of states for voters to elect him President by write-in votes.

In a December 19, 2015 US Presidential 2016 candidacy announcement made on Coast to Coast AM before millions of listeners, Mr. Basiago stated that unlike previous US Presidents Bush, Clinton, Bush and Obama, all of whom were also identified as future presidents by Project Pegasus and briefed on their destinies but who then concealed their prior knowledge for political gain, he has made a conscious moral decision to make it publicly known that the U.S. government has used secret time travel technology to identify him as a future President.

Mr. Basiago’s third Truth Proposal of the 100 Proposals is entitled:

The President should ask living Presidents to admit they were given foreknowledge of their destinies,”

and requests the President to ask Presidents Bush Sr., Clinton, Bush Jr. and Obama to “tell the truth to the American people and admit that they were given foreknowledge of their presidencies.” 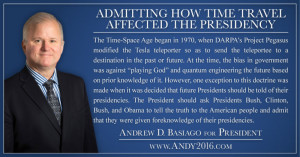 The story of how all U.S. presidents have been pre-identified by secret U.S. time travel and briefed of their future destiny can be accessed in this exclusive article:

The 100 Proposals: A Summary

The New Agenda for a New America consists of 100 Proposals in three areas: Truth, Reform and Innovation. In conversation with this reporter, Mr. Basiago stated that regardless of DARPA-CIA time travel pre-identification, a Presidential candidate’s qualities and platform have to be of such excellence as to win the election. If excellence of platform and personal vision are winning qualities, then Mr. Basiago’s 2016 platform is a winner.

Karen D. Kinnison, communications director of Mr. Basiago’s campaign says, “I am overwhelmed by the substance and clarity — and quantity! — of these proposals. They are well composed, educational, enlightening, bold and very well designed and executed. I have seen nothing of this stature from the other candidates.”

Notable in the Truth area are policies for the disclosure of secret advanced life-advantaging technologies of the U.S. government; declassification of secret time travel technologies; reform of the CIA to “open source intelligence”; a pardon and Presidential Medal of Freedom for Edward Snowden; a live television address ending the ET cover-up; Presidential policies for open ET contact; Transparency on NASA and the U.S. government’s Moon and Mars programs; Declassification of the Secret Space Program and Secret Treaties with ET races; Reinvestigation of 9/11 and the missing $2.3 trillion; New Geophysical Year on Cosmic mysteries; Protection of the Sasquatch under the Endangered Species Act; Government transparency under the Freedom of information Act.

A time-travel pre-identified President for 2016?

An evaluation of the 2016 U.S. presidential race from a time travel pre-identification perspective does not yet definitively reveal who may have been pre-identified and briefed by DARPA-CIA time travel as to their future destiny as US President winning the 2016 election, as Bush Sr., Clinton, Bush Jr. and Obama were by the evidence. Perhaps future U.S. Presidents are not told the year in which they will win.

As of this time, of the Republican candidates, Donald Trump appears to be the likely Republican nominee and Hillary Clinton the likely Democratic nominee.

A possible candidate who may have been pre-identified and briefed by DARPA CIA time travel as a future US President is Donald Trump, who in a 2000 Simpsons cartoon was elected to a U.S. Presidential term that was a disaster. One could argue that the Simpsons cartoon may have been an Illuminati leak of future information, as in the 1995 Illuminati card deck where time travel pre-identified information like 9/11, Katrina, and the 2010 BP Oil Spill are released as “cards” in the years before the events happen. No other witness has come forward yet to link Donald Trump to the secret time travel program.

As of Friday March 11, 2016, a Trump rally in Chicago, Illinois was shut down by protesters. If in fact Donald Trump is the DARPA CIA time travel pre-identified president elected in 2016, Mr. Basiago’s 100 Points would in 2020 provide a working infrastructure and platform to revive the USA from the severe international and internal strains it will suffer during a 2016 Trump presidency. Andrew D. Basiago’s 100 Proposals would make Andrew a contender to be the President elected in November 2020 or 2024.

After four or eight years of Trump, the American People may well be ready for the advanced visionary nature and yet practicality of the 100 Proposals.

Asked about this issue, Mr. Basiago replied, “Alfred, John F. Kennedy didn’t run for President in 1956. Rather, he had his name put in nomination to be the Vice Presidential running mate of Adlai Stevenson at the DNC in 1956 but was defeated by Estes Kefauver. Yet I think your analogy is quite apt that in 2016 I am positioned relative to 2020 as Kennedy was in 1956 relative to 1960.”

The leading Democratic contender Hillary Clinton is a possibility for having been briefed by DARPA-CIA, especially as her husband Bill Clinton was reported briefed he was to be a future President, and it is highly probably that Bill told Hillary as part of their political partnership.

Andrew Basiago reports his father, an official in the secret time travel project, also interacted with Hillary Clinton as part of a time-travel informed mission during the Summer between her graduation between Wellesley and her first year at Yale Law School. This suggests that the interaction between Hillary Clinton and the DARPA-CIA secret time travel program officials may have been more extensive than is known.

With regard to Sen. Bernie Sanders, it should be noted that despite Sanders many progressive social and economic policy positions, his public statements on advanced technologies such as time travel and the ET presence are agnostic and dismissive and hence it appears that DARPA and CIA time travel have not briefed Democratic contender Sanders on any pre-identified electoral victory as U.S. President.

There are many permutations if Hillary Clinton is the 2016 DARPA-CIA time travel pre-identified U.S. President as to how Mr. Basiago’s 2020 and 2024 campaigns could be structured.

A President Clinton may choose to make public the secret US time travel and Mars programs, which would make Mr. Basiago a strong credible candidate for 2020 or 2024, vindicated by a US President. This is only one permutation. There are many possible other permutations that may lead to a Basiago electoral victory in 2020 or 2024.

One or more of three candidates in the 2016 race were briefed by CIA officials on their future destiny as US President.

One of the three candidates is Andrew D. Basiago, who claims he has been so briefed and has just released his 100 Proposals for the 2016 Presidency. At this stage it is difficult to visualize as a practical matter a 2016 electoral victory via write in Votes for Andrew D. Basiago.

However, if we re-frame Andrew D. Basiago as a DARPA-CIA time travel pre-identified President in 2020 or 2024, then the real time dynamics become more clear and realistic.

Panel: 2016 US Presidential Election, Tribulation, Jubilee & Fall of the Great Babylon – Are you on an AI catastrophic or organic positive timeline?

The USA 2016 President must restore the original US constitution and protect the rights of children against pedophiles. A White Hat in the White House

Positive Timeline may result in the election in 2016 of a Positive US President, contrary to Matrix time travel pre-identification:

2016 Time Travel Chronicles: CIA Time Travel pre-identification is why I switched from running in the 2016 US Presidential race to watching the 2016 race by Alfred Lambremont Webre