You are here: Home / Brussels / CIA named in Brussels attacks according to new analysis of Zaventem airport explosions witness testimony

Vancouver, BC – Exclusive new video published to YouTube on March 22, 2016, purports to reveal how the Central Intelligence Agency was named by one witness to explosions at Brussels’ Zaventem airport, part of a wave of attacks against the Belgian capital that took place earlier that day. ISIS, a division of the CIA (according to a Russian army military expert), is said to have claimed responsibility for what alternative news sources have identified as CIA/Mossad state-sponsored for-profit false flag terrorism in which the Belgian government reportedly cited 30 dead and 230 injured.

A witness, “James Firkin,” a seeming Brussels resident whose identity could not be further verified at the time of this report, told the BBC of events both during and immediately after two explosions took place within the departures area of Zaventem airport. The British broadcaster went on to describe how “Belgium’s Interior Minister Jan Jambon had said on Monday that the country was on the highest level of alert for possible revenge attacks after the capture of Salah Abdeslam. He told Belgian radio: “We know that stopping one cell can… push others into action. We are aware of it in this case.”” 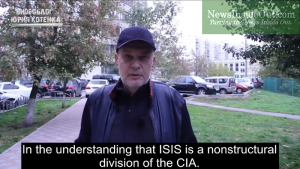 During an on-camera appearance published to YouTube on December 24, 2015, Russian Colonel Alexander Zhilin stated “My point of view is that we absolutely must support Assad. We must ensure he has all he needs to destroy ISIS, in the understanding that ISIS is a non-structural division of the CIA.”

In his comments from Havana, President Obama stated “We stand in solidarity with [the people of Belgium] in condemning these outrageous attacks against innocent people.” He went on to remark “We can and we will defeat those who threaten the safety and security of people all around the world.”

The presence of previously unreported forensic information concerning a secret revelation in Zaventem Airport explosions witness James Firkin’s testimony to the BBC was detected while monitoring mirror-filtered renderings of the witness statements. The audio soundtrack was loaded in the edit bay of a digital audio workstation then subjected to mirror-filtering and time-expansion in preparation for a detailed auditory study. The conduct of this procedure was informed by best practices refined through repeatedly providing military, forensic and medical-grade intelligence that had been successfully vetted through practical real-world feedback over nearly 20 years of unmatched research and reporting.

NewsInsideOut.com coverage has described how the same procedure publicly revealed details of the Iraq War, identified the BTK Killer, named Russian spy Anna Chapman’s accomplice and uncovered the UFOs and ETs in Edward Snowden’s NSA cache weeks, months and years before such information became widely-accepted public knowledge. Below is a partial transcript of the witnesses’ statements from March 22, 2016, preceded by the secret message encrypted backwards therein.

The lies. A reveal: CIA: “It’s weird. We’re watching it on the television and kind of thinking we were there two hours ago, three hours ago. How did we survive that? Because it was literally the ceiling was falling in around us and the glass was exploding around us and so many other people were badly injured. We’ve learned now that people have died. There’s also the other attack on the metro. I take that metro quite a bit. It’s just surreal but we’re hunkered down at home and trying to come to terms with it all I guess.”

‘Primacy of the American Sniper’: A Hard-Hitting Two-Hour News Exposé with Jon Kelly