You are here: Home / CIA Phoenix Program / ‘Primacy of the American Sniper’: A Hard-Hitting Two-Hour News Exposé with Jon Kelly

These controversial claims are supported by a substantial library of rare and previously censored audio recordings providing evidence of a conspiracy to change the course of history through fabrication of false-flag domestic and foreign acts of state-sponsored for-profit terrorism implicating the Federal Bureau of Investigation, Central Intelligence Agency and Elizabeth Windsor, the reigning British monarch. Former CBS Radio feature producer Jon Kelly presents his case in a two-hour hard-hitting news exposé that originally aired on Revolution Radio at FreedomSlips.com for March 18, 2016.

A “Former Oregon Officer” posted in comments to YouTube: “This was an illegal roadblock. It’s not taught in the academy and there is case law that states it’s equal to deadly force. Tennessee vs Garner states that you cannot use deadly force against fleeing felons, unless those felons pose a direct threat to you or the public. Neither was the case here and in fact in Oregon the only thing they were guilty of is criminal trespass and elude, both of which are misdemeanors. This cornerstone of all police use of force cases is taught in the academy, but OSP clearly does it here anyway. They created exigent circumstances here that allowed them to shoot this man. This is NOT a good shoot. It’s the equivalent of me tossing you a knife and then shooting you.

“The fact that the Troopers were not indicted only show that the jury did not have all the relevant evidence. Just the info I posted here would give serious doubt to finding them justified and at least allow a trial to prove themselves. And that doesn’t even included shooting at the truck prior to the roadblock or shooting at LaVoy when he exited with his hands up.

“I didn’t agree with the park occupation, but killing this man was not right.” 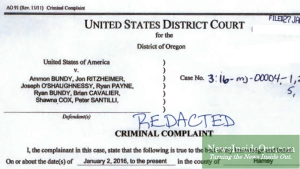 A Criminal Complaint signed by U.S. Magistrate Judge Stacie F. Beckerman on January 26, 2016 (the day of the shooting), and posted to the U.S. Department of Justice website omits mention of the name LaVoy Finicum in the list of defendants, bringing into question whether any warrant for his arrest existed at the time of the first stop.

The Oregonian reported on March 15, 2016, that “Five FBI agents assigned to the traffic stop told investigators that none of them fired at Finicum’s Dodge pickup after it crashed at their roadblock. Oregon investigators, however, concluded that one agent fired twice at the truck, hitting it once in the roof and missing on the second shot.

“FBI aerial surveillance video shows that before the detectives could get there, the FBI agents searched the area with flashlights and then huddled, according to law enforcement sources who have seen the video. The group then broke and one agent appeared to bend over twice and pick up something near where the two shots likely were taken, the sources told The Oregonian/OregonLive.”