You are here: Home / Omniverse / Now Streaming: ‘Navigating the Omniverse’ Workshop brings Conversation about Souls, Disclosure and Service to Others Online 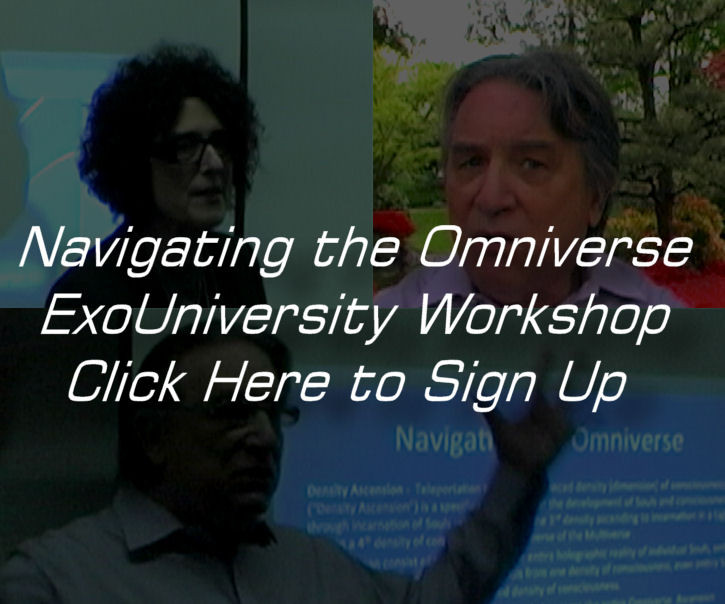 Vancouver, BC – May 16, 2016, marks the official release of an exclusive new ExoUniversity online streaming workshop taped in Vancouver, British Columbia, Canada, on NewsInsideOut Plus. Filled with fascinating information and experiential practices, “Navigating the Omniverse to Disclosure and Density Ascension” captures veteran international leaders in wellness and education Alfred Lambremont Webre, JD, MEd, and Geri DeStefano Webre, PhD, at the peak of their insight.

“This is a conversation. We’re opening up this view of what the Omniverse looks like,” said Geri DeStefano Webre. “And how it’s constructed and how (hopefully) we as people and souls can move through these layers and go back home.”

It was a beautiful April day at the P.N.E. as I walked past Momiji Gardens towards the entrance of Vancouver’s 2016 Body Soul & Spirit Expo to attend “Navigating the Omniverse”, a breakthrough workshop based on Alfred Lambremont Webre’s bestselling new book. Upon my arrival I met with Expo co-founder Chandler Armstrong who showed me to the room where the workshop was to be held.

“The Omniverse,” stated previous NewsInsideOut.com coverage, “first formally explored in Alfred Lambremont Webre’s 2014-15 books on the Omniverse, now joins the Multiverse (first named in 1895 by the American philosopher and psychologist William James as the collection of all universes), and our Universe (first formally conceived by the Sumerian astronomers around 3500-3200 BC as a discrete creation of time, space, energy and matter) as central Cosmological bodies around which humanity organizes its understanding of the Cosmos.”

Seating was packed with enthusiastic readers eager to receive a coveted edition of the Omniverse book. The author was busy signing autographs like a rock star as his crew finished setting up the room. Everything appeared to be working, the audience were in their seats and before we knew it the event had begun.

Geri DeStefano Webre started off with an orientation outline of the program to follow. She then led the group in guided visualization with breathwork. Her approach invoked an eclectic mix of space, environmental, mystic, healing, and philosophical themes to guide participants on a refreshing inner journey that focussed on seeing the positive and feeling good.

A projector image shining unintentionally upon the speaker created a minor psychedelic light show invoking an aura of times past. As I watched the delicate play of light I considered how those visuals may have helped some audience members get deeper into the spirit of this part of the Omniverse program.

Alfred was next with a very detailed “presentation of findings” accompanied by dozens of slides that guided the audience through some of the terms and concepts addressed in the book. It was a “mapping of the dimensional ecology of the Omniverse” that appeared to hold the audience’s full attention.

“Earth is changing and Earth itself may be ascending into what’s called the fourth density which is not a time-space density. It’s a love-based density,” the author said. He offered his position that key processes occurring globally at the present time include a concise internalization of the Omniverse, development of a science-based understanding of Soul Ascension, provisioning for a research-based overview of Disclosure and the unfolding of a Love and Soul-based program leading to what he called a “Service to Others Earth”.

“We’re actually in the process of transitioning through a consciousness density,” he said explaining that the Omniverse is constructed around “dimensionality and densities of consciousness”.

Readers concerned about the seeming übertalk-nature of these pronouncements take note: the detailed slideshow and relaxed conversational style of the presenters made much of the material easily accessible. The fact that both presenters appeared to embody and had lived through much of what they were teaching furthered the aura of authenticity that surrounded the audience experience of this event.

Alfred Lambremont Webre’s slides took up much of the remaining time, leaving questions for meetings that took place outside in the sunshine. There was a well-defined feeling of community and interest in creating community around the topics discussed that morning. It appeared that a new and truly “Omniversal” conversation had begun, one that now continues online.

Access to the video stream for “Navigating the Omniverse to Disclosure and Density Ascension” is available via rental or purchase. Under the rental agreement, viewers have 30 days to view the title and 72 hours to complete viewing once streaming begins. NewsInsideOut Plus subscribers will receive access to this title as part of their regular programming in June.

Join Alfred Lambremont Webre with Geri DeStefano-Webre, PhD in a breakthrough Seminar/Workshop, “Navigating the Omniverse to Disclosure and Density Ascension”, based on Alfred’s best-selling new book The Omniverse setting out a map for navigating our newest cosmological entity, the Omniverse.

Laura Eisenhower and distinguished whistleblowers, authors, and researchers present at Mt. Shasta on August 26-28, 2016 on Disclosure leading to Ascension as 4/5th fractal Density converges Within! 😉

Want more “Inside-Out” news? Subscribe to NewsInsideOut Plus! NewsInsideOut Plus is for readers who support our journalism and want to deepen their connection with “Inside-Out” reporting. For $7 per month or $70 per year, a richer NewsInsideOut experience awaits. Receive exclusive access to mini-documentaries like “Marfa Reflections” and “UFO Canyon,” behind-the-scenes interviews like “UFOs and Spirituality” plus more. With your subscription you will be able to unlock the latest NewsInsideOut Plus content. Subscribe early to ensure you don’t miss any of the excitement.

Now landed & available on Earth! The Omniverse: Ground-Breaking Book by Alfred Lambremont Webre Confirms Existence of the Omniverse, Advanced Alien Technology & Secret Inhabited Colony on Mars, to be featured on Coast to Coast AM on Black Friday Nov. 27, 2015!

UFO Mountain: ‘Odyssey’-like contact in Cascadian adventure of a lifetime