Incoming President Duterte, Arceneaux says, will be responsive to the needs of offshore Filipinos, known as “Pilipino sa Ibayong-dagat”.

The UK Guardian reports that Duterte is now threatening journalists with assassination, something NewsInsideOut.com condemns.

John Arceneaux, an IT entrepreneur who has pioneered social media for off-shore Filipinos, believes that a coalition of grass-roots, social media-driven off-shore Filipinos and grass roots, change-oriented voter support in the Philippines helped Duterte to win the May 9, 2016 election, reportedly “by a wide margin based on an unofficial tally.”

Incoming President Duterte, Arsenaux says, will be responsive to the needs of offshore Filipinos, known as “Pilipino sa Ibayong-dagat”.

The life of many offshore Filipinos is not an easy one. In some cases, they see their children, who are raised by relatives in the Philippines, infrequently, and live a live of voluntary exile for economic reasons.

“The exodus includes a number of skilled workers taking on unskilled work overseas, resulting in what has been referred to as a brain drain, affecting the health and education sectors. For example, doctors have retrained to become nurses.”[i]

Contributions to the Filipino economy by offshore Filipinos

In his NewsInsideOut.com interview, Arceneaux notes that the financial remittances of offshore Filipinos to their families back home are a substantial source of foreign exchange for the Philippines.

Corroborating these observations, one source states, “Remittances by unofficial, including illegal, channels are estimated by the Asian Bankers Association to be 30 to 40% higher than the official BSP figure. In 2011, remittances were US$20.117 billion. Philippines is the fourth largest recipient of official remittances after China, India, and Mexico. [Off shore Filipino] remittances represent 13.5% of the country’s GDP, the largest in proportion to the domestic economy among the four countries. Offshore Filipino remittances is also credited for the Philippines’ recent economic growth resulting to investment status upgrades from credit ratings agencies such as Fitch and S&P. In 2012, approximately 80% of the remittances came from only 7 countries—United States and Canada, the United Kingdom, UAE and Saudi Arabia, Singapore, and Japan.”[ii]

In a May 26, 2016 public statement from Davao, Philippines, where Duterte is awaiting his June 30, 2016 Inauguration as President, Duterte said he had discussed human rights with Canada’s Prime Minister Justin Trudeau in the aftermath of the beheading of Canadian hostage John Risdel on April 25, 2016 in Sulu province, Philippines. Duterte said he apologized to Trudeau for the beheading of a Canadian citizen in the Philippines.

According to press reports, “Duterte said he and Trudeau also discussed human rights, and he said he told Trudeau: ‘Universal Declaration of Human rights, fine, I said ‘I’m following it, but Mr. Prime Minister, with few exceptions.’”

“Duterte has been criticized for his human rights record in Davao, where he was mayor for 22 years. Hundreds have been killed in that port city on an anti-crime purge some believed he secretary run. On the presidential campaign trail, Duterte had repeatedly vowed to kill drug criminals. Investigators have said they have found no hard evidence of a direct role by Duterte in the vigilante-style killings, saying not one witness has come forward to testify against him.”[iii]

On May 27, 2016, incoming Philippine Vice President Leni Robredo was elected separately on the birthday of her late husband who was killed in a 2012 plane crash, defeated Philippine Senator “Bongbong” Marcos, the son of Ferdinand and Imelda Marcos.[iv] 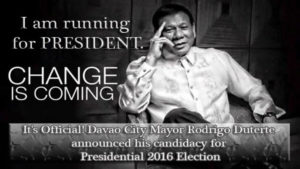 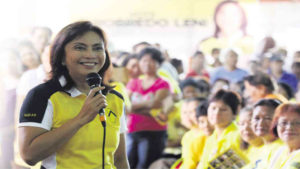 The UK Guardian reports that Duterte is now threatening journalists with assassination, something NewsInsideOut.com condemns. “Just because you’re a journalist you are not exempted from assassination, if you’re a son of a bitch,” Duterte said when asked how he would address the problem of media killings in the Philippines, after a reporter was shot dead in Manila last week.

“The Philippines is one of the most dangerous nations in the world for journalists, with 174 murdered since a chaotic and corruption-plagued democracy replaced the dictatorship of Ferdinand Marcos three decades ago. “Most of those killed, to be frank, have done something. You won’t be killed if you don’t do anything wrong,” Duterte said, adding that many journalists in the Philippines were corrupt.

“Duterte raised the case of Jun Pala, a journalist and politician who was murdered in Davao in 2003. Gunmen on a motorcycle shot dead Pala, who was a vocal critic of Duterte. His murder has never been solved. “If you are an upright journalist, nothing will happen to you,” said Duterte, who has ruled Davao as mayor for most of the past two decades and is accused of links to vigilante death squads.

“’The example here is Pala. I do not want to diminish his memory but he was a rotten son of a bitch. He deserved it.’

“One of the world’s deadliest attacks against journalists took place in the Philippines in 2009, when 32 journalists were among 58 people killed by a warlord clan intent on stopping a rival’s election challenge. More than 100 people are on trial for the massacre, including many members of the Ampatuan family accused of orchestrating it.”

John Arceneaux: “People worldwide are helping each other to change the world”

In his NewsInsideOut.com interview, John Arceneaux states that he is now working to connect the infrastructure and networks he has developed to support offshore Filipinos so that they can interact symbiotically and positively with the incoming Duterte-Robredo Administration. Arceneaux hopes to bring the expertise he has developed to outreach to the world for the new Filipino government and for the Filipino people and offshore Filipinos.

Arceneaux says, “People worldwide are helping each other to change the world. Each one teach one each one reach one. You must wake up and stop being a consumer and start producing on a daily bases. All of your life you have been a slave to something. *Government *Social Systems *Faith Based Systems ALL HAVE FAILED! Fact is we are the reason that we have failed worldwide. We have been lied to and also used to fund the evil powers that try to control all of our lives. ANSWER? People helping each other worldwide everyday. Active lives changing others lives daily. We must produce results everyday worldwide starting now. Face your self and make a change in your life today. Join our live show and start your 28 day new me life change with U-6.ME WORLDWIDE and be SOCIAL-LIVE. Daily radio show worldwide will help you as you help others. People helping each other is SOCIAL-LIVE.”

“On the last day of canvassing of votes, Rodrigo Duterte wins as president with 16,601,997 votes, while Leni Robredo tops the tight vice presidential race with 14,418,817 votes”