VANCOUVER, BC Easter Sunday April 16, 2017 – April 17, 2017– Pattie L. Brassard, a White Hat expert former US military disputes claim that a North Korean KMS-4 EMP satellite is in a polar orbit over the USA.

In an exclusive interview with Alfred Lambremont Webre, Pattie L. Brassard actually demonstrates in real time how controllers are attempting to manipulate the KMS-4 Satellite data so as to make it appear that the North Korean Satellite is over the United States, when in fact live images from the US military International Space Station during the interview show there is no satellite in that area of space.

KMS-4 (Kwangmyongsong-4 meaning Bright Star-4 or Lodestar-4 in Korean) is an earth observation satellite launched by North Korea on 7 February 2016. The launch happened after North Korea conducted a nuclear test on 6 January and as the United Nations Security Council is deciding on sanctions to be placed on the country following the nuclear test. The launch was also timed to celebrate the 74th birthday of late leader Kim Jong-il on February 16. Details on the Kwangmyongsong-4 satellite are not available, though it can be assumed that its design is similar to KMS-3-2 which carried an Earth observation camera and a 470MHz UHF radio payload to transmit patriotic songs. KMS-3-2 was reported to be three-axis stabilized and its cameras were to be used to collect still imagery as well as videos, to be downlinked via X-Band. The satellite is expected to operate for at least four years and fulfill an Earth Observation task.” 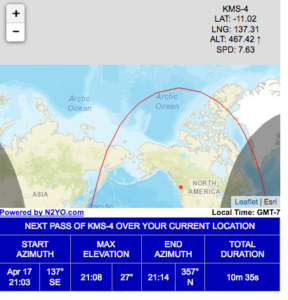