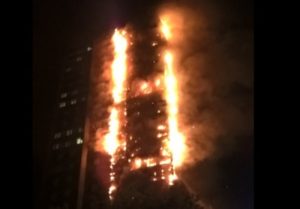 GRENFELL TOWERS INTENTIONAL FALSE FLAG DEMOLITION: “Twin Towers of fire” spell out the numeral 11. The “Twin Towers of Jachim and Boaz” represented by the numeral 11 are the central symbol of Freemasonry, a Zionist satanic cult dedicated to overthrowing religion in general, and in particular to destroying Islam and its Masjid al-Aqsa in Jerusalem, and “rebuilding” a satanic blood sacrifice temple overseen by the Antichrist or Dajjal. Human sacrifice, often by fire (i.e. “holocaust”) is a central preoccupation of the highest levels of Freemasonry, as explained in Kevin Barrett radio interview with former Vice Presidential candidate Art Olivier.”

London UK August 29, 2017 – An 80 page detailed crime report and proposed terms of reference for the Grenfell Tower Fire Public Inquiry has found that “what took place on the night of 13th into early hours of 14th June 2017 at Grenfell Tower, was undeniably a mass murder and a crime against humanity of mammoth proportions. This was the most wicked, brutal, vicious and cowardly act of evil and domestic terrorism ever committed in the United Kingdom.”

WHY WE ARE URGENTLY SUBMITTING OUR OWN PUBLIC INQUIRY INVESTIGATIONS FINDINGS AND PRIMA FACIE EVIDENCE
“We, Cousins Seven and Roni Nicholas deliver this detailed Crime Report on behalf of our family members the direct relatives of two resident’s who died inside Grenfell Tower. Namely, our aunt Marjorie Vital aged 68 and our cousin Ernie Vital aged 47. They both resided on the 16th floor flat 162 of Grenfell Tower, where they lived for 41 years. View 6:00 time of video link. https://www.youtube.com/watch?v=huI6xeJrm9I

“3) It is only on the advice of a lawyer and good friend who also almost perished inside Grenfell Tower, that we are now submitting our urgent ‘Prima Facie’ evidence, gathered from investigations that has been expertly complied from many first class researchers, investigators, and investigative journalist reporters from around the world, besides ourselves

“8)The evidence and live testimonies that we have already examined, prove that the hundreds of innocent people/members of the public who were residents, just living their lives otherwise peacefully inside the Grenfell Tower block, including our aunt Marjorie Vital, and cousin Ernie Vital, were most certainly, without a shadow of doubt, all specifically targeted to be horrifically murdered, for this evil to be broadcasted around the world in a
real life snuff horror movie.”

REAL REASON FOR THE GRENFELL TOWER INFERNO AND MASS MURDERS
“1) Grenfell Tower fire factually happened because a bunch of no good, exceptionally evil, highly corrupt, insane, extremely deranged dangerous greedy people with some extremely disturbing satanic beliefs and ideologies, in need of immediate emergency psychiatric intervention and removal from the public, clearly all wanted these residents to all be burnt alive in the most horrific way imaginable, with no means of getting out alive of what evidently was a very carefully meticulously pre engineered and manufactured nightmare snuff horror movie broadcasted to the world for sadistic pleasure.”

MASS ARRESTS OF THE DANGEROUS RINGLEADERS NEEDED TO SECURE THE PROTECTION OF WITNESSES OF GRENFELL TOWER INQUIRY
“1) All provisions must be taken to ensure all our families, friends and colleagues and witnesses to be able to conduct their lives and these inquiries safety by making the necessary emergency mass arrests of all ringleaders and crime syndicate cult members without delay.”
PARTICIPATION – OUR IMMEDIATE CONCERNS ABOUT THE PUBLIC INQUIRY
“1 We are deeply concerned there will be no transparency and that our hard evidence produced herein will be systematically covered up as per usual. It is important that this Public Inquiry places the emphasis on resolving this problem at the very root regardless of how shameful the sordid truth of these crimes may be deemed to be to the UK as a state or country as a whole.
2 We are deeply concerned that those on the Inquiry panel have much more in common ‘culturally speaking’, with the majority of the parties who have perpetrated these atrocities, rather than with the majority of those of us affected by it. So naturally, we feel the panel are much more likely to be inclined to conduct the findings in favour of seeing more the perpetrators point of view, purely based on them being kin folk.
3 It is very important that this inquiry is neutral, to avoid any possibility that there will be any ‘Serious Conflict Of Interest’.
4) Respectfully, we have to be honest, but there urgently needs to be much more diversity on the panel, because it is already being perceived as being conducted on a old outdated ‘white supremacy slavery model’, and given the magnitude of what we are dealing with, and cultural heritage of the majority us who are affected. Given that those who perpetrated the Grenfell atrocities being slave traders, the very notion that this inquiry is being run on such outdated models is deeply offensive to us as Sovereign individuals.
5) it is also very important for the inquiry to be inclusive rather than divisive, with no possibility of discrimination or favouring ‘majority’ of those responsible on the basis of any of them being kin folk.
6) We assert this respectfully, because this is how the current selected line up on inquiry panel is being perceived to the rest of the world. People are not happy with it at all to be honest.
7) We have had absolutely no part in the selection process regarding ‘any’ of the panel members. They were not selected by we the public and if the Inquiry is to be truly Public led they need to be.
8) We know absolutely nothing about any of those involved in the current panel whatsoever. This is obviously of major concern to us. We have no way of verifying that all current panel members are completely neutral, have no conflicts of interest and have our best interest at heart. Because as you will see for yourselves by the evidence provided herein: our best interests have ‘never’ been considered in the UK before.
9) It’s not personal to anyone in particular on the panel don’t get us wrong. But culturally speaking, ‘under civil procedural rules’ there is an obvious definite ‘unequal footing’ and rule number one says ‘the overriding objective’ of the law is to do justice’, and we personally feel it’s impossible for justice to be done with such an obvious unfair disadvantage from the get go.
10)Therefore respectfully, as this is a ‘Public Inquiry’ and we are not your slaves, we require to select our own handpicked professional panel members to be included on the Public Inquiry panel team and participation process.
11)The mere fact that nobody has been arrested already despite one of the most horrific mass murders ever to be committed in the United Kingdom, also signals to us there is already a deliberate attempt in play to prevent arrests and prosecutions of the guilty.
12)If this is allowed to happen, you will be further endangering the global public at large, as there already reports about new Terrorist attacks going on which are potentially being carried by this very same crime ring.
13)There is a duty to ensure that this public Inquiry is really truly controlled by we the Public in the true sense of the word, without an ounce of discrimination, racism and prejudice of those of us severely adversely afflicted by this barbaric abominable crime ring.
14) So respectfully, given the magnitude of what we are factually dealing with, we believe that it is way beyond the scope and remit of what the current one single Judge will be able to handle, which we believe will affect his ability to hear this case fairly and deliver the most appropriate fitting remedy and justice.
15)Therefore, it is important that we the people who are directly affected select our own handpicked totally transparent Judges to include them into the participation process.
16)For a crime such as this with such a vast scale and magnitude, which obviously covers wide parameters and areas of law, one single Judge on the panel by himself is no way sufficient.
17)Therefore, this Public Inquiry must be immediately extended to include a panel of no less than 5 culturally diverse honest Judges, known for fairness transparency and a reputation of hearing cases with the upmost integrity these Judges must be brought in from diverse ethnic communities.
18) Given the unprecedented scale and nature of what we have been subjected to, we need to have a much more integral role in the process of remedying this situation. Therefore also want to be copied in to the full and participate at a core level and be able to give live testimony.
We know and believe that the evidence provided our here proposition is factual and absolutely true.”