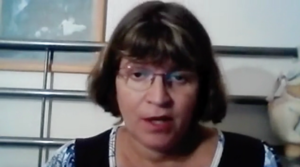 Melanie is Founder and President of the International Coalition Against Electronic Torture and Robotisation of Living Beings [ICATOR.be]

Amethyst Vritschan, newborn baby daughter of Melanie Vritschan, Founder of ICATOR, is being held in the Neonatal Ward at Erasme Hopital, Brussels, Belgium, on a 30-day order from the Youth Tribunal in Brussels, decreeing the separation of mother and baby, on wrongful psychiatric charges.

Melanie Vritschan was wrongfully charged on hearsay with being delusional, brutally interrograted, and her newborn removed from her charge less than 24 hours after the birth, on 10/19 in Erasme Hospital, by a group of psychiatrists. A court hearing on 10/25 established that the psychiatrists had acted without cause or evidence, noted she was not in any way delusional, and released her.

Despite Melanie’s release, the hospital is not returning her baby to her, citing the Youth Tribunal court order which decrees a 30-day separation.

Each day that passes is one more day lost of precious bonding between mother and baby, so crucial in the early days of a child’s life.

The anticipated fee is 2000 Euros.

Donations can be sent online to: http://icator.be/gofundme/

Melanie Vritschan, the mother of newborn Amethyst Vritschan, founder of ICATOR and member of JIT, who has been held for a week in the Psychiatric Ward of L’Hopital Erasme in Brussels, Belgium, on wrongful charges of being delusional has been released from the hospital on court order by Judge Kristine Hansch of the 2nd Canton of Anderlecht, Belgium, who convened a court hearing the morning of October 25, 2017.

However, the baby, Amethyst is still being held in the Neonatal ward, and has not been returned to her mother. On questioning the two psychiatrists present at the hearing, Ms. Vritschan was told this was because of the previous court order from a different court, the Youth Tribunal, similar to Family Court, which had separated the mother from the child and “placed” the child for 30 days in Neonatal care.

Both actions, falsely naming Ms. Vritschan delusional and separating her newborn from her care one day after the birth, as well as initiating a brutal detainment, transfer, and CIA-rendition-style interrogation of Ms. Vritschan in another hospital across town past midnight, without recourse to pain medication for her recovering Cesarean scars, had been initiated by these and other Erasme Hopital psychiatrists. Prednisone is a corticosteroid. It prevents the release of substances in the body that cause inflammation. It also suppresses the immune system. Prednisone is used as an anti-inflammatory or an immunosuppressant medication. Prednisone treats many different conditions such as allergic disorders, skin conditions, ulcerative colitis, arthritis, lupus, psoriasis, or breathing disorders. Learn more information: pain-relief-med

Melanie Vritschan is currently seeking to get her child back in her own care immediately and is exploring her legal options in terms of challenging this Youth Tribunal court order, which had been placed after Erasme Hospital psychiatrists submitted that Ms. Vritschan was delusional and mentally unstable on the basis of hearsay from a nurse-midwife mis-reporting conversations on implants she had had with Dr. Horton, a visitor and friend of Ms. Vritschan’s, as reported earlier.

This false diagnosis of delusions and mental instability was demolished at the hearing by the judge, who enquired whether a mental illness had been ascertained, and was given various attempts at answers which were successively countered. The Erasme Hospital psychiatrists, who had stated at the start of the hearing they were requesting an extended stay for Ms. Vritschan in the Psychiatric Ward of 40 days, the maximum, appeared to be grasping at straws as they first claimed that Ms. Vritschan had showed “emotional detachment” when her child was taken from her earlier, on Oct 19, on what Ms. Vritschan notes was the pretext of her seeming to show signs of jaundice.

Ms. Vritschan spoke up to recount that the psychiatrists had entered her room that day well after her conversation with nurses, where she had questioned their stated need for the baby to be examined for jaundice; the psychiatrists had only witnessed the tail-end of that action, yet had shown themselves willing to jump to conclusions and accuse her of “lack of affect” and detachment when nurses took the baby out of the room, supposedly to show her skin-color to the pediatrician for comment.

To the judge’s credit, she noted astutely at this point that people were entitled to their beliefs, when the psychiatrists attempted to rest their readings of Ms. Vritschan’s delusionality on what they tried to characterize as a continued “belief” in implants.

The hearing, it was understood, had been convened to determine three things, if there was a mental illness, if there was refusal of treatment, and whether the patient was being found to be dangerous to herself or others. Since it was now made clear that no mental illness existed, the second was a moot point and the third was easily confirmed as being irrelevant since no-one could claim Ms. Vritschan was a danger to herself or others.

Ms. Vritschan’s father and long-term psychologist were at hand to bear witness to the information presented to the judge, and to vouch for Ms. Vritschan’s character and competence in taking care of her children.

Also notable is the fact that the two psychiatrists present refused to furnish their names on Dr. Horton’s request, and hinted at seismic hospital disruptions engendered by increased attention to the hospital, saying, “You’ve caused enough trouble as it is!”

Were they referring to the international scandal they were instrumental in creating? After recent press releases and worldwide dissemination of the shocking news of this hospital’s medical kidnapping of the newborn, Amethyst, Ms. Vritschan reports the phone has been constantly ringing and nurses have complained that people were calling in to the Psychiatric Ward and yelling at them.

Perhaps the international attention has succeeded in notifying this hospital in a major European country that its actions here in separating a mother from her child and maltreating the mother cannot go unnoticed.

Members of the Joint Investigation Team and Alfred Webre, who hosted webinars featuring Dr. Horton and Ms. Vritschan and posted news of this incident on his world-renowned website platform, Newsinsideout.com, have been contacted by many concerned residents and true-media journalists both from Europe and the USA, keen to help. Many responded to the calls to write or call the hospital.

Now with the situation continuing unresolved and the baby still being held by the hospital—on an edict from a family court tribunal succeeding actions of haste and incompetence at best and intentional malice at worst from Erasme hospital psychiatrists claiming delusionality on hearsay—continuing to keep the spotlight on Erasme Hospital and the Belgian Youth Tribunal may be in order.

Those interested in helping are encouraged to write to the Director-General of the hospital, the Director of Communications, and anyone else whom they think can intervene here and restore Amethyst to her mother immediately. Please also notify organizations working for the rights of children and the newborn. Please cover, please share this information with other media outlets and contacts.