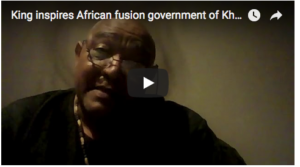 The Constitution of Good Hope: Discussion

In his Webinar, King Cornelius discusses the initial Constitution of the State of Good Hope, as precedentially based on the existing Constitution state of Godou in Southern Africa.

In addition, a spokesperson for the King and for the Shadow Government of Good Hope responded to written questions from NewsInsideOut about plans for the Constitution and Elections in Good Hope.

NEWSINSIDEOUT: Question 1: What are the plans for the drafting of a Constitution for the State of Good Hope?

GOOD HOPE SPOKESPERSON “There is a constitution already in place but of course once the shadow government is replaced by a suitable government then the constitution will of course be looked at and any changes ensue.”

NEWSINSIDEOUT: What will be the role of the Prime Ministers, the Cabinet, and the Parliament in the drafting and adoption of the Constitution?

GOOD HOPE SPOKESPERSON “As per any government, it will of course have to be drafted by the Prime ministers and the Parliament, then passed by the various bodies, including the king and the four nations.”

NEWSINSIDEOUT: Will the King have any role in the drafting or approval of a Constitution?

GOOD HOPE SPOKESPERSON “I do believe that this would be a correct thing to do as the monarchy plays an important role in the country. The existing constitution is from the king himself. [As per King Cornelius III Webinar, Good Hope’s initial constitution is adapted from the existing Constitution of the Souther African State of Godou.]’

NEWSINSIDEOUT: Will there be a popular vote [Referendum] in the Four Nations to adopt the Constitution as well?

GOOD HOPE SPOKESPERSON “As per above.

“Since there is a monarch and four nations government, this therefore is new territory but the foundation is solid so as to proactively move forward on an equal governing bases. We would like to show the world that four nations can work together for the greater good under God … show the world a beacon of hope.”

NEWSINSIDEOUT: Question 2: What are the current plans of the Prime Ministers [Kings of Parliament] of Good Hope and/or King Cornelius of holding Parliamentary elections in the four nations of Good Hope for seats in the Parliament of Good Hope?

GOOD HOPE SPOKESPERSON “As it stands, we have implemented a shadow government until the country is firmly secured, our people left in South Africa is safe and that the country is running. The current prime ministers and the king has specific plans that need to be put in place that we have been working on for a long time and at this point would like to secure these before elections. I hope, for one, that the timeframe is shorter rather than longer and we can go to elections for the prime ministers in the near future. The actual timeframes we cannot assume right now as the outcome of what may ensue is unknown.

“The government positions of the four nations do not have to be voted on as we are adopting a production based government where relevant citizens of the country can apply for specific positions and they are vetted on qualifications and experience so there will always be the best person for the job. These government employees will also be hired and fired as per any normal employment and based on their performance. We want to adopt business minds and in this way grow the country to be the best that the country can possibly be. Focus on production is paramount.”

NEWSINSIDEOUT Question 3: Until Parliamentary elections are held in the four nations of Good Hope, who are the decision-makers appointing Members of Parliament, Prime Ministers, Cabinet Ministers, and government officials?

GOOD HOPE SPOKESPERSON “At this time, until secession is 100% legal and specific plans carried out, we cannot divulge that information yet as there is still an element of danger to the families. What we can say is that the four interim council prime ministers are the ones that have come up with the plan and been working on it since inception (well two of us). We, together with the king, have appointed an interim government which is on-going and until the government is effectively running. From here there will be change and receiving CV’s etc in order to have the best possible team to effectively carry out a good governance plan that we have laid out.”

NEWSINSIDEOUT: Is there any indication on the timing on these phases of government? For example: Six months, a One Year Plan, a Five Year Plan?

GOOD HOPE SPOKESPERSON:  “At this point, we can safely say that this is the first time that anyone that we know has been part of a secession of this magnitude and would love to say that the phases of government will be within six months. We have planned for certain events to happen within a certain timeframe but tomorrow brings new challenges and although we pre-empt situations they are out of our hands and into Gods. Once secession is completed in its totality then second phase is launched for securing and other related plans. From here, phase three is launched for governance and so it goes.

“We have to remember that although there is a solid plan, we have to assume that things will change. We are business strategists by trade (some of us) so we plan for all events and again, we have never done something of this magnitude and will not presume that we have the answers and know direction. We are yet to find people here that have ever done something like this and we are staying away from politicians claiming to know. This must be done by the people that are on the ground and can see clearly and not clouded by political correctness or other evils (in my opinion).

“What we do know is that our people are being exterminated at an alarming rate and the demise of our people is imminent … it is for this reason that we are here, to stand up and not wait for referendums, signatures but rather to plan and to carry out our plans. The government, constitutions and policies etc, etc will all come in its time but for now we focus on saving our people first. We have extremely clever and loyal people and we have no doubt that they will do what is right in order to save our people. From there, govern the country to the best of their abilities in order to protect our people that this never happens again. Our people must never be ruled by tyrants or dictators ever again, the nations must be ruled by their own people under God.

“I trust this finds you well and hope that I have satisfied your questions. Please note that this is my views on your questions. I am the founder of the plan and approached the Khoisan king in order to from an alliance. As we all know that as time flutters on, plans that were once becomes others plans. We accept this as growth and assume for their best intentions.

“I pray for Gods glory in all of this.

“P.S I love Vancouver. I was a forest fire-fighter north of Kamloops in Clearwater for about 5 years .. love the people and the country.”