You are here: Home / Alfred Lambremont Webre / A Thanksgiving greeting from US Congressional Candidate & ET Contactee Bettina Rodriguez Aguilera [Miami-Dade, FL], who supports Congressional Hearings on the US Secret Space Program. As a U.S. Citizen, you can contribute to her Congressional Campaign no matter where you reside. Go to http://bettinaforcongress.com

A Thanksgiving greeting from US Congressional Candidate & ET Contactee Bettina Rodriguez Aguilera [Miami-Dade, FL], who supports Congressional Hearings on the US Secret Space Program.  As a U.S. Citizen, you can contribute to her Congressional Campaign no matter where you reside. Go to http://bettinaforcongress.com 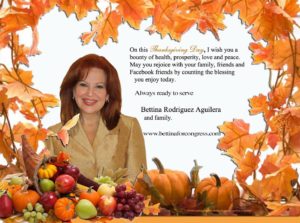 MIAMI, FL. – Thanksgiving Day November 23, 2017 – If you are a U.S. Citizen, you can contribute to her Congressional Campaign no matter where you reside by going to Bettina’s Campaign website:

Bettina needs your contribution for her December 31, 2017 year-end report to make a good showing in the race against her status-quo opponents to represent Miami-Dade County in the U.S. Congress.

Read my letter to the scholarly Rabbi Dr. Nathan Lopes Cardoso in Israel as to reasons why every person, regardless of race, religion, gender, orientation, or cosmology, should support and contribute to the Campaign of ET “Adductee” & Contactee Bettina Rodriguez Aguilera, who has long and solid credentials as an elected public official in the Miami-Dade area, as well as a committed position to hold open and much-needed U.S. Congressional Hearings on the U.S. Secret Space Program.

I have spoken with Bettina personally and I can assure you that she is the “real deal” on understanding the positive Extraterrestrial presence, having experienced it first-hand as have I.

Thank you for your kind attention,

Greetings! My name is Alfred Lambremont Webre. I am a fortunate author whose 2005 book Exopolitics you graced with a generous endorsement, for which I want to thank you.

“Exopolitics: Politics, Government and Law in the Universe” by Alfred Lambremont Webre

“As our globe gets smaller and smaller, our eyes start to focus more and more on the many worlds around us. It is not just that we need more physical space for ourselves, but also existentially. We are contemporaries of God and we are duty-bound to reveal more of His greatness. Consequently, we must ask ourselves, how shall we discover more and more of Him? Alfred Webre’s book makes us realize that this may be possible in ways we did not imagine some years ago.”

Bettina Rodriguez Aguilera, a wonderful friend and human being, and current Candidate for the Republican nomination for Florida’s  27th U.S. Congressional District in Miami-Dade County, in the November 2018 election, is visiting Israel in the near future and would like to meet with you on matters related to your Exopolitics Endorsement while she is there.

Bettina has an excellent record as an elected official and public servant in the Miami-Dade County, Florida area. As a Washington Post has recently pointed out, “In 2014, [Bettina] sponsored a human-trafficking ordinance after two massage parlors were shut down for prostitution.”

Bettina also has an additional asset as a Candidate for U.S. Congress who, as an elected U.S. Representative for the Miami-Dade area.

Bettina is publicly committed, as were U.S. Presidents Ronald Reagan and Jimmy Carter, to secure open public hearings and Oversight in the U.S. Congress on the U.S. Secret Space Program.

Bettina is quoted in the Washington Post as stating:

“For years people, including Presidents like Ronald Reagan and Jimmy Carter and astronauts have publicly claimed to have seen unidentified flying objects and scientists like Stephen Hawking and institutions like the Vatican have stated that there are billions of galaxies in the universe and we are probably not alone. I personally am a Christian and have a strong belief in God, I join the majority of Americans who believe that there must be intelligent life in the billions of planets and galaxies in the universe.”

The U.S. Secret Space Program, which should be subject to public annual Congressional Oversight and now is not, which includes an annual multi-trillion $dollar expenditure to support:

If you were so kind to meet with Bettina while she is in Jerusalem, Bettina would like to explain to you personally the nature of her gentle and Spiritual interaction with Extraterrestrial beings.

During that encounter, the Washington Post reports, Bettina stated

“God is a universal energy, not a person,” the aliens told her, according to Rodriguez Aguilera. “It’s in everything. God talks to people and they understand it in different ways, but there’s only one religion.”

It is remarkable, Rabbi Nathan Lopes Cardoso. The words of Extraterrestrial beings that met with Bettina remind me very much in Spirit of the words that you shared with my readers in my book Exopolitics in 2005.

I am writing as an author and cosmologist to ask you, Rabbi Nathan Lopes Cardoso, if during Bettina’s visit with you, you could provide a public, written endorsement of U.S. Congressional Candidate Bettina Rodriguez Aguilera?

Why endorse Bettina Rodriguez Aguilera for US Congress?

Thank you for listening to my letter and our collective requests.

Bettina has your address and contact information and will be following up with any necessary logistics for her trip to Israel.

With all best wishes,

Ps – I would like to send you a gift of my most recent book THE OMNIVERSE if you wish. I can send a copy of the Kindle eBook edition to the email address of your choice. Thank you.

THE OMNIVERSE is fundamentally a scientific hypothesis – the hypothesis of the dimensional ecology of Omniverse. It is written using the scientific method, replicable forensic evidence from the science of Parapsychology regarding the Inter-life [“afterlife”], expert evidence, and direct eye-witness evidence and qualified documentary evidence from long-standing, secret governmental-Extraterrestrial liaison programs, time travel and teleportation programs, and interplanetary travel programs, such as the secret US Government Mars bases program, over which you as an elected US Congressional Representative would have oversight.

THE OMNIVERSE was prompted in part by a written request to me from Oxford University Press [a division of Oxford University, England] to write a book on “Extraterrestrials and the Law” that would be a textbook for law schools in training future lawyers and law professors in this emerging field of law, and a primer for personnel in international organizations like the United Nations, NASA, ESA etc. who needed legal guidelines in developing internal policies for dealing with legal issues that would arise from dealings with intelligent civilizations in the Universe once the major space-faring nations on Earth go forward with open ET Disclosure.

As a child whose parents were living in a rural sugar factory and plantation in Cuba (Oriente y Camaguey), I grew up educated around grandparents, uncles and aunts in Havana and in the United States, as well as in boarding schools. One of my uncles was Frank Adamson, a former Rhodes scholar at Oxford and Admiral in the US Navy. So I had an early childhood understanding of the rigors of scholarship at Oxford.

When I started the outline of the book on Extraterrestrials and the Law, I soon realized that the book required a scientific cosmological foundation to be credible to both the scientific and the legal community – asking such plain questions as:

“Is this real or is it science fiction?”

And so what started out as “Extraterrestrials & the Law” for Oxford University Press emerged as the scientific hypothesis of the dimensional ecology of the Omniverse, published in the book THE OMNIVERSE.

I now have to circle back around and write “Extraterrestrials and the Law” book, if you follow my drift.

Here is the History of Science overview of the Omniverse:

These are the three principal cosmological bodies through which humanity comprehends the Cosmos.

The Universe, an organic singularity of time, energy, space, and matter, was discovered by the Sumerian astronomers in 3500-3200BC.

The Multiverse, the totality of all Universes, was discovered by the American scientist William James in 1895.

The Omniverse, the integrated whole of the Multiverse and the Spiritual dimensions of the intelligent civilizations of souls, Spiritual Entities, and Source, was first formally proven in 2014 in two independent science-based books, respectively by David Bertolacci and by Alfred Lambremont Webre.

Scientific discoveries are often simultaneously made in different parts of Earth by different people and the discovery of the Omniverse is such an example.

I would rather not quote from the Omniverse book here, as I believe you would best approach the book on its own directly at a time of your own free will’s choosing.