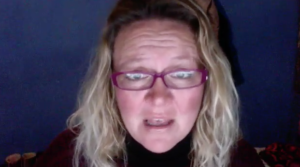 Who is Mel Ve?
http://stopsouthafricangenocide.org/2016/03/boer-warrior-who-is-mel-ve/

BOER WARRIOR: Who is Mel Ve? – Of Huguenot and Boer origin, Mel Ve left her friends and family behind to seek a better life outside of the dire state of South Africa in 1999. Since then South Africa has gone from bad to worse. Whilst living abroad, Mel Ve has continued to bring international awareness to the ongoing genocide that is happening in South Africa.

One of the most forward thinking Investigative Journalists of our time, Mel Ve’s dedication to the pursuit of truth has won her international recognition for her integrity and communication of facts, in spite of many challenges and dark forces working against her.

Mel says: “The truth beauty of humanity is that ultimately, we all want the same thing, we all want to be free. It is time to unite on our common ground.”

Mel Ve’s book, THE SOUTH AFRICAN GUIDE TO THE GLOBAL CONSPIRACY book I – Light & Dark, is banned in South Africa, and Mel Ve cannot return to her home country. Shortly after the book’s release, Mel Ve’s publisher had to abandon the project due to threats to his family. After a brief period of disappearance right as the book was launched, this statement was released by EXPAND YOUR MIND publishers:

23 April 2012
“The past few weeks have been extremely tough on me as well as my immediate family. Due to the nature of my work and my exposé of certain groups I have become the target of sinister and clandestine groups bent on destroying me and my family.
With immediate effect I am shutting down Expand Your Mind Publishers as a publisher of other author’s books.
My sincere apologies to those of you who have been affected by this. It is time I treasure dearly, my loved ones and family.
To those of you who have been concerned about my well-being and state of mind, I appreciate your concern dearly.”

As this book cannot be sold in print on bookshelves in South Africa due to the fact that it is banned, Mel Ve has made this book available for FREE on line in eBook format since May 2012. Over 100 000 copies have been downloaded.

“I am busy reading your book and was shocked to read that part about Mandela, but I wasn’t surprised. It all just makes sense. The majority of people in SA think we are free…Its an illusion. We are more enslaved than ever before. We all live in a prison inside our own homes, with high walls, electric fencing, boomed off areas with security guards and patrol. Its like living in a war zone with the high crime, but the war was not declared. I have never seen so many beggars at traffic intersections going on their knees for something to eat. You call this freedom…The South African Guide To The Global Conspiracy should be compulsory reading for all who dearly love this country. When enough of us read it then watch the frequency of this country change as we wake up. Mel well done a great read” Trevor T.

Mel Ve continues to lobby the various European government heads to accept fleeing refugees from South Africa. Mel Ve has personally delivered several applications to the International Criminal Court in The Hague, regarding the genocide that is going on in South Africa, but all applications have been denied.

Mel has very fairly pointed out that the genocide in South Africa is not restricted to colour. That being said, there is a very distinct pattern of murders that pertain to the white people of South Africa. Indeed, it is a genocide. All people are suffering due to man made illnesses brought about by toxic vaccinations. Many more people of all colours are suffering avoidable economic hardship and are living in absolute poverty.

On 25 February 2016, Mel Ve’s documentary film THE LAST OF THE BOERS, was blocked on You Tube after having received 61 225 views. This happened to coincide with an escalation of violence in South Africa, coupled with land reform polices being passed in the South African parliament, literally legalising the confiscation of any land for any purpose with no need for any compensation. The removal of THE LAST OF THE BOERS from You Tube also coincided with Mel Ve’s public letter to the world governments aimed at bringing awareness to the situation happening in South Africa, and to ask for refugee status for those who are fleeing from South Africa. The international community has been largely ignorant of the situation faced by people in South Africa, and South Africans are not recognised as refugees, despite large amounts of refugees being admitted to Europe at the moment.

Realising how corrupt mainstream media is through her own personal experiences, Mel Ve began the process of creating a new paradigm of media in 2009 with her information portal known as FREEDOM CENTRAL.

Mel has since gone on to create a totally FREE & INDEPENDENT LIVE broadcast network that is dedicated to the pursuit of a free, fair, just, non-toxic, sustainable world.

On the 1 January 2015, Mel Ve launched the ground breaking Conscious Consumer Network, which is a first of it’s kind broadcast network that has literally revolutionised FREE & INDEPENDENT MEDIA. As the co-creator of CCN along with her partner Biggi, Mel has dedicated this network to purveying the truth about what is really happening to her people in South Africa.

The LIVE stream and archives are FREE TO VIEW as Mel Ve firmly believes that information is the common heritage of all beings, and not the exclusive intellectual property of those who can afford it.

Mel Ve’s work is totally INDEPENDENT and dependent on public support. Please donate to this funding campaign and show support for FREE & INDEPENDENT MEDIA, particularly those that are bringing attention to the truth in South Africa. Please donate at the below link:

Visit the CCN SHOP which delivers world wide. All proceeds go towards supporting Mel Ve’s various humanitarian causes. Mel Ve receives absolutely no funding from government sources, and relies on public funding to survive. She makes all of her work available for FREE, as she will not limit people from accessing her information based on their lack of money.

IF anybody wants any special designs and features on their apparel purchased at our online shop, please email us at

Thank you to all who take the time to work through the vast amounts of information and resources that we provide in order to educate and inform people about the truth.

Mel Ve says: ” I will never stop fighting for the freedom of my people. Be they black or white, all lives matter, and we all deserve to share in the abundance of this planet, rather than contribute to the suffering for the purposes of profit”

Please read these other articles by Mel Ve to gain a broader perspective on her experience and vision.

We thank you all for supporting FREE & INDEPENDENT MEDIA.