Vancouver, BC – New video published to social media on April 15, 2018, offers analysis suggesting Nasim Najafi Aghdam was engaged in an act of proxy false flag domestic terrorism based upon recently-released police camera footage documenting contact with the then-at risk 38-year old missing person. Approximately 12 hours before a high-profile attack in San Bruno that left three wounded and the suspected shooter dead police cameras recorded a conversation that took place in the early morning hours of April 3, 2018 at a Walmart parking lot where officers discovered the supposed lone YouTube shooter asleep on the back seat of her car.

Mainstream media’s narrative attempting to explain this recent shooting at YouTube headquarters profiles the Iranian-born rising social media star Aghdam as one of an anticipated very large number of disgruntled web video creators antagonized by YouTube’s ongoing behind-the-scenes harassment, intimidation, manipulation and censorship. In Nasim Aghdam’s case one disgruntled content creator is said to have taken up arms in order to exact workplace vengeance upon the social media giant.

Embracing this conceit condemns potentially hundreds of thousands or more innocent victims of YouTube covert social engineering to profiling as potential mass shooting suspects by state and local law enforcement. Your YouTube channel was demonetized? You might be a potential terrorist the politically-loaded narrative appears to menace.

To gather further information about this case NewsInsideOut’s Jon Kelly ran samples of Nasim Aghdam’s statements to police during the April 3, 2018, early morning contact incident through a regiment of digital audio procedures seeking sleep talking-like messages encrypted mirror-wise in her voice. Far beyond indicating the subject’s willingness to engage in violence, the findings from this study suggest a conspiracy involving unknown accomplices engaged in an act of Silicon Valley social engineering.

NewsInsideOut offers substantial unimpeachable documentation citing proven reliability of the aforementioned reporter’s findings in high-profile cases involving global warfare, serial killers, Russian spies and CIA assassins over a period of 17 years. Those stories are legend in editorial newsrooms throughout the English-speaking world and beyond as evinced by the distribution of these reports along with invitations to speak through major media brands in the United States and around the globe.

Below is a partial annotated transcript of Nasim Aghdam’s contact with City of Mountain View police on the morning of April 3, 2018. The secret message encrypted therein precedes the language of the natural speech heard at 25:24 on the video.

“I’m in a militia”: Yeah, I didn’t tell them [Aghdam’s family] anything. I just left home.

According to YouTube parent Google’s Dictionary a militia can be “a military force that engages in rebel or terrorist activities”. With Nasim Aghdam’s seemingly involuntary declaration of militia status before armed peace officers and the acts of workplace violence that followed 12 hours later in mind, the YouTube headquarters shooting narrative must now advance to include consideration for a conspiracy involving more than one person.

That conspiracy might now be characterized as an act of terroristic proxy warfare in aid of permanent state social engineering initiatives (including criminalization of disenfranchised cultural creatives). These findings speak of a potential domestic sleeper terror cell comprised of Iranian-born Americans and others. Why else would a suspected shooter disclose these potential facts on the eve of a crime in such accordance with YouTube parent Google’s semantic perspective? 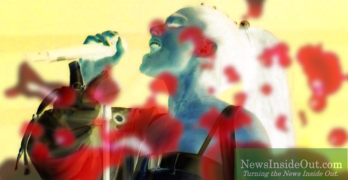