I am writing to ask that you not spend valuable Canadian tax-dollars on settling anything with Kinder-Morgan, a multi-billion dollar oil and gas company from Texas. Your government was elected because it was supposed to be a new day for Canada- one that worked to address climate change by transitioning our society away from fossil fuels; one that would lead the way for ensuring the Rights of Indigenous Peoples (who largely oppose the Kinder Morgan pipeline) and one that would protect our oceans, land and air from pollution. None of these will be achieved by the course you seem to want to take.

A recent report by Canadian energy expert and former federal NRCan employee David Hughes shows that despite increasing our oil and gas production since the 1970s, overall revenue to the government has been in steady and recently sharp decline. https://energyoutlook.ca . Oil and gas workers account for only 2.23 percent of the national workforce with the majority of the jobs temporary and in Alberta its only 7%. Why are you willing to high-grade our environment and our economy for a diminished return. Federal Liberals, why are you sending us backwards?

Alberta based Iron and Earth http://www.ironandearth.org plans on creating 1,000s of new Alberta jobs in the renewables sector. That’s the kind of focus your government should be taking.

New Zealand has declared a ban on all new offshore oil and gas exploration. Their prime minister, Jacinda Ardern, said her government “has a plan to transition towards a carbon-neutral future, one that looks 30 years in advance”. “Transitions have to start somewhere and unless we make decisions today that will essentially take effect in 30 or more years’ time, we run the risk of acting too late and causing abrupt shocks to communities and our country.”… https://www.theguardian.com/world/2018/apr/12/new-zealand-bans-all-new-offshore-oil-exploration-as-part-of-carbon-neutral-future

It’s frankly shocking how willing your federal Liberal government is to jeopardize our economic and environmental future. Please see the chart below from Mr Hughes’ report-there is no return from pursuing fossil fuels, but you can certainly make the choice to change directions.

In 2003, Bethesda, MD-based Lockheed Martin, DEW directed energy weapons contractee of the UNITED STATES OF AMERICA CORPORATION, was permitted by the federal Liberal Party Canadian government to contract for processing data at the heart of Canadian sovereignty – the Canadian national Census.

At that time Liberal “Industry Minister Allan Rock confirmed that the Canadian subsidiary of aerospace giant Lockheed Martin Corp. won a multi-million-dollar contract to lead the dress rehearsal for this country’s next census — and possibly the census itself.

“The census, taken once every five years by Statistics Canada, is considered the most detailed snapshot of the Canadian population, tracking everything from mobility and income to education and religion, both nationally and by community. Data for the most recent census was collected in the spring of 2001, when 11.8-million households were asked to fill out the questionnaire.

“Mr. Rock said the contract was awarded through an open bid that conformed to federal government rules. “I assume the lowest bidder for the best price for the best quality got the job,” he said yesterday following Parliament’s Question Period. “Canadian firms got to bid as well.”

“When asked how he thought Canadians would feel about a massive U.S. defence company gathering and presumably having access to their private information, Mr. Rock said he assumes that those factors were considered during the tendering process.

“‘I’m sure the people involved in the decision considered all of this.”

“Lockheed Martin, based in Bethesda, Md., is the largest U.S. military contractor and also the U.S. government’s top manager of computer networks. Its Canadian subsidiary is Lockheed Martin Canada of Kanata, Ont.

“‘I just think most Canadians would find it offensive that the census is going to be done by a U.S. company.”

“Mr. Blaikie said it’s even worse that a large defence company could be gathering Canadians’ personal data. “I already have constituents who don’t like to answer these questions,” he said during an interview. “Where is this information going to reside?”

“Mr. Blaikie said that the awarding of the census contract to the U.S. defence giant also shows one of the key flaws of the North American free-trade agreement. “It’s just the kind of thing we warned about.”

“Under NAFTA rules, companies from Canada, the U.S. and Mexico are eligible to apply for most medium and large-sized government contracts.

“When asked during Question Period about the contract, Mr. Rock said Statistics Canada, which compiles the data for the census, will maintain its high standards. He also said that the true purpose of the census is to ensure that the census figures are reliable.”

Activist Audrey Tobias objected to Lockheed Martin’s involvement with processing the census in 2011. She died in December 2016. (Chris Young/The Canadian Press), another DEW assassination victim, by the evidence, of Lockheed Martin’s infiltration of Canada and its attack upon Canadian citizens with DEW Directed Energy weapons. 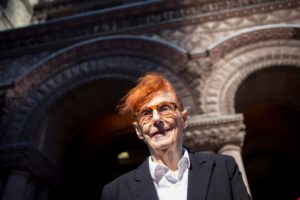 See also: “Yoga teacher Eve Stegenga faces federal charges for not completing the official census in 2011, having objected to her personal information being in the hands of a subsidiary of Lockheed Martin, US weapons giant. ”

In our sovereign province of British Columbia, the Liberal Government, following its clandestine sabotage of the government of Premier Glen Clarke, also caused the BC Ferries System,a statutory and Common Law part of the British Columbia Highway and public roads and accommodations system, to be infiltrated and fragmented by arms dealer Lockheed Martin, DEW directed energy weapons contractee for the UNITED STATES OF AMERICA CORPORATION.

Ramola D/Dharmaraj is a Quincy Township & Commonwealth of Massachusetts natural person, mother, journalist, University professor & Ban DEW World Treaty Conference Township & Commonwealth Coordinator who has been criminally harassed by a covert DEW network facilitated by an employee of General Dynamics, a DEW Defense contractee for UNITED STATES OF AMERICA CORPORATION, who has unconstitutionally & unlawfully infiltrated himself onto the Quincy Township School Committee in the Commonwealth of Massachusetts.

Professor Ramola D/Dharmaraj in a recent essay documents DEW war crimes of Communist China, and the Urgency of Need for a Ban Against Mind & Body Control Weapons to Protect All Humanity

“Recent news reports from China publicizing the use of “emotional surveillance” neuro monitoring technologies being used in mandatory fashion on the brains of thousands of factory workers under guise of improving human performance, in tandem with recent news reports as in the 60 Minutes MIT Media Labs coverage of demonstrated Synthetic Telepathy via neurostimulators and Brain Computer Interface technologies should alert all humanity that we are living in a critical time period today, when governments, Intelligence agencies, corporations, and militaries have the technological tools for complete and absolute domination over the entire human body and brain, and the power to monitor, manipulate, modify, assault, mutilate, degrade, and destroy every single human body and brain on the planet.

“An extreme and criminal disservice to humanity has been achieved by mainstream media outlets such as The New York Times, The Washington Post, Wired, Vice, The Daily Beast, and others in keeping the progressive information on the development of these deadly military neuro/DEW mind and body control weapons from the public, by their steady discharge of Propaganda coverage for the Deep State, which has, true to Military Deception and Psychological Warfare form (as spelled out in Military and Intelligence manuals), sought to both openly downplay mind-control and body-control with remote energy weapons as “science fiction” and to openly deny, dismiss, decry, and discredit the numerous and increasing reports of experienced non-consensual assault with directed-energy weapons, neuroweapons, and RFID implants arising from all over the world over the last three to five decades.

“At the level of the covered agencies and militaries comprising the “Deep State” and engaging in this non-consensual Neuro/DEW Mind Control assault experimentation/operation, a key aspect of this concealment has been to label all reporting victims “Targeted Individuals” and then run a series of Psychological Operations in their midst to tarnish them falsely as mentally ill, which has included co-opting mainstream media to run avid POPPCon (Psy Op Propaganda Piece Con artist coverage) against them, in efforts to disappear, discredit, and silence all public emergence of their vital testimonial as “paranoid and delusional.”

“It must be noted that it was this exact modality of supreme deception and betrayal that was used to disappear the victims of radiation experimentation in the 1950s, and all other non-consensual subjects of military and Intelligence experimentation over the years, by having them falsely labeled, stigmatized, and silenced by corrupt doctors and psychiatrists as mentally ill, crazy, paranoid, delusional, and schizophrenic. The story of Elmer Allen, well-known 1950s Manhattan Project experimentee, which illustrates this betrayal, was uncovered by investigative journalist Eileen Welsome, author of The Plutonium Files, and is featured here: Paranoid Schizophrenia, Tool of the Red Terror, Makes a Comeback in Authoritarian USA and Other Western Democracies. Discussion of this phenomenon as related to the silencing of important CIA/NSA/FBI/military/police whistleblowers is discussed here in CIA Whistleblower Barbara Hartwell’s recent article, which features the testimonial and reportage also of whistleblower Ed Schooling and a US News and World report article by Victoria Pope on Soviet-era repressive psychiatry: Extreme Sabotage of Journalists and Government Whistleblowers.

“Scientists, military, and Intelligence whistleblowers of conscience and integrity have stepped forward today to present the truth to the public, to lay bare the actuality of the facts behind surveillance abuse and non-consensual human experimentation, which includes the Military/Intelligence misuse of these military Neuro/DEW Mind Control weapons as implements of Torture on humans, and to give witness to the fact that “Targeted Individuals,” far from being mentally ill, are critically important whistleblowers, front-line reporters, and canaries-in-the-coal-mine witnesses attesting to the criminal use of these deadly weapons on humans today.

“(There are many other websites with vital reportage—those maintaining Truth-filled information on this subject are encouraged to contact this writer so a full list can be published.)

In the public interest, 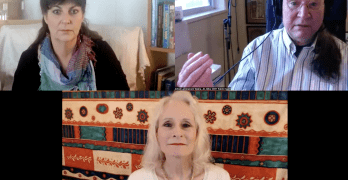