VANCOUVER, British Columbia – May 7, 2018 – YouTube.com has blocked Alfred Lambremont Webre’s ExopoliticsTV for exposing the cover-up by British prime minister May and her government of an ICC-prohibited crime-against-humanity committed on the grounds of the British Parliament. 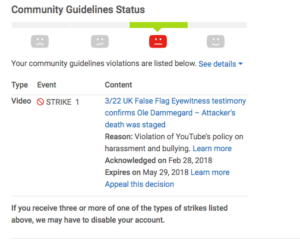 Viewers can now watch Alfred Lambremont Webre ExopoliticsTV news interview that YouTube.com blocked in furtherance of ICC-prohibited crime-against-humanity committed on the grounds of the British Parliament on March 22, 2017. 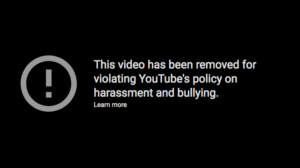 Article 7 of the Rome Statute of the International Criminal Court, 17 July 1998 – entitled “Crimes against humanity” – means “any of the following acts when committed as part of a widespread or systematic attack directed against any civilian population, with knowledge of the attack:
k) Other inhumane acts of a similar character intentionally causing great suffering, or serious injury to body or to mental or physical health.

As an eyewitness to the ICC-prohibited crimes-against-humanity at Westminster Bridge-Houses of Parliament on March 22, 2017, Paolo Fiora found himself only a short distance away from the alleged attacker Khalid Masood [AKA Adrian Elms] as he lay on the ground surrounded by police after he had been reportedly “shot and killed by a gunshot wound to the chest” according to the later official inquest.

According to Paolo, Khalid Masood did not appear to be shot or hurt, was not bleeding, appeared calm and relaxed, and was staring at Paolo and his companion as they videotaped him through a fence at Westminster.

“This is the most poignant video clip Marcin and myself took today, you can see clearly what is happening on the House of Parliament ground, you can see on the left a group of police officers standing around the attacker [Khalid Masood] on the ground and various other groups of people and police officers moving around the ground, Marcin and I, we could see the attacker very clearly on the ground, his face, he was still conscious and moving at the time and he appeared to be looking in our general direction, the clip ends when a police officer from inside the ground approaches us and told us to move away from the gate.”

On the scene eye witness testimony from Paolo Fiora

Paolo Fiora writes, “I believe I mentioned before, that for the full two minutes we were able to peer through the House of Parliament railings, the alleged attacker appeared to be conscious all the time and also somewhat calm and relaxed and the fact that he appeared to be staring at myself and Marcin for quite some time (a message to us?) may acquire a new sinister significance.”

Paolo Fiora writes, “As a footnote to our conversation I would like to add that the more I look back at the events of Wednesday March 22nd, the more I get the gut feeling that the whole event was staged.

“You get the entire Brexit conversation becoming increasingly acrimonious, both within this country [UK] and within Europe, risking to do a HUGE amount of political damage to the establishment party, the Tory party, and hey presto, you get a false-flag terror attack to get things back on track.”

Eyewitness Paolo Fiora is part of an anti-Transhumanist Agenda group called LES, London End Stalking action group, affiliated with EUCACH, the European Coalition against Covert Harassment and ICATOR in Brussels, as well as Derrick Robinson’s PACTS International in the USA. LES holds a vigil in front of the UK Houses of Parliament every Wednesday and so were on hand to witness and video the 3/22/2017 ICC-prohibited Crime-against-humanity on the grounds of the British Parliament.

Paolo Fiora is also a Convenor in London, Britain of the newly announced World Treaty Conference to ban Neurotech Weapons, whose Secretariat is located at www.peaceinspace.org.

Below is the original link – unlawfully deleted by You Tube.com – to ExopoliticsTV’s news program on the cover-up by British prime minister May of the ICC-prohibited crimes against humanity committed on the grounds of the British Parliament on March 22. 2017.