VANCOUVER, BC – Physicist and former Oxford University fellow Dr. Katherine Horton has released a ground-breaking June 5, 2019 Joint Investigation Team study of affidavits submitted by victims of DEW EMF directed energy weapons targeting that constitute “crimes against humanity”. Article 7 of the International Criminal Court Statute, which 118 nations have ratified and granted Universal Jurisdiction to their courts to prosecute, defines “Crimes Against Humanity” as follows:

(e)     Imprisonment or other severe deprivation of physical liberty in violation of fundamental rules of international law;

(h)     Persecution against any identifiable group or collectivity on political, racial, national, ethnic, cultural, religious, gender as defined in paragraph 3, or other grounds that are universally recognized as impermissible under international law, in connection with any act referred to in this paragraph or any crime within the jurisdiction of the Court;

(i)     Enforced disappearance of persons;

(k)     Other inhumane acts of a similar character intentionally causing great suffering, or serious injury to body or to mental or physical health.

(b)     “Extermination” includes the intentional infliction of conditions of life, inter alia the deprivation of access to food and medicine, calculated to bring about the destruction of part of a population;

(c)     “Enslavement” means the exercise of any or all of the powers attaching to the right of ownership over a person and includes the exercise of such power in the course of trafficking in persons, in particular women and children;

(d)     “Deportation or forcible transfer of population” means forced displacement of the persons concerned by expulsion or other coercive acts from the area in which they are lawfully present, without grounds permitted under international law;

(e)     “Torture” means the intentional infliction of severe pain or suffering, whether physical or mental, upon a person in the custody or under the control of the accused; except that torture shall not include pain or suffering arising only from, inherent in or incidental to, lawful sanctions;

(f)     “Forced pregnancy” means the unlawful confinement of a woman forcibly made pregnant, with the intent of affecting the ethnic composition of any population or carrying out other grave violations of international law. This definition shall not in any way be interpreted as affecting national laws relating to pregnancy;

(g)     “Persecution” means the intentional and severe deprivation of fundamental rights contrary to international law by reason of the identity of the group or collectivity;

(h)     “The crime of apartheid” means inhumane acts of a character similar to those referred to in paragraph 1, committed in the context of an institutionalized regime of systematic oppression and domination by one racial group over any other racial group or groups and committed with the intention of maintaining that regime;

(i)     “Enforced disappearance of persons” means the arrest, detention or abduction of persons by, or with the authorization, support or acquiescence of, a State or a political organization, followed by a refusal to acknowledge that deprivation of freedom or to give information on the fate or whereabouts of those persons, with the intention of removing them from the protection of the law for a prolonged period of time.”

The Joint Investigation Team June 5, 2019 DEW study foreshadows the impacts on a human population subjected to long term sustained DEW EMF directed energy weapons targeting, such as those by planned implementation and roll-out of 5G EMF, which has been characterized as “a DEW directed energy weapons system camouflaged as a telecommunications system“. 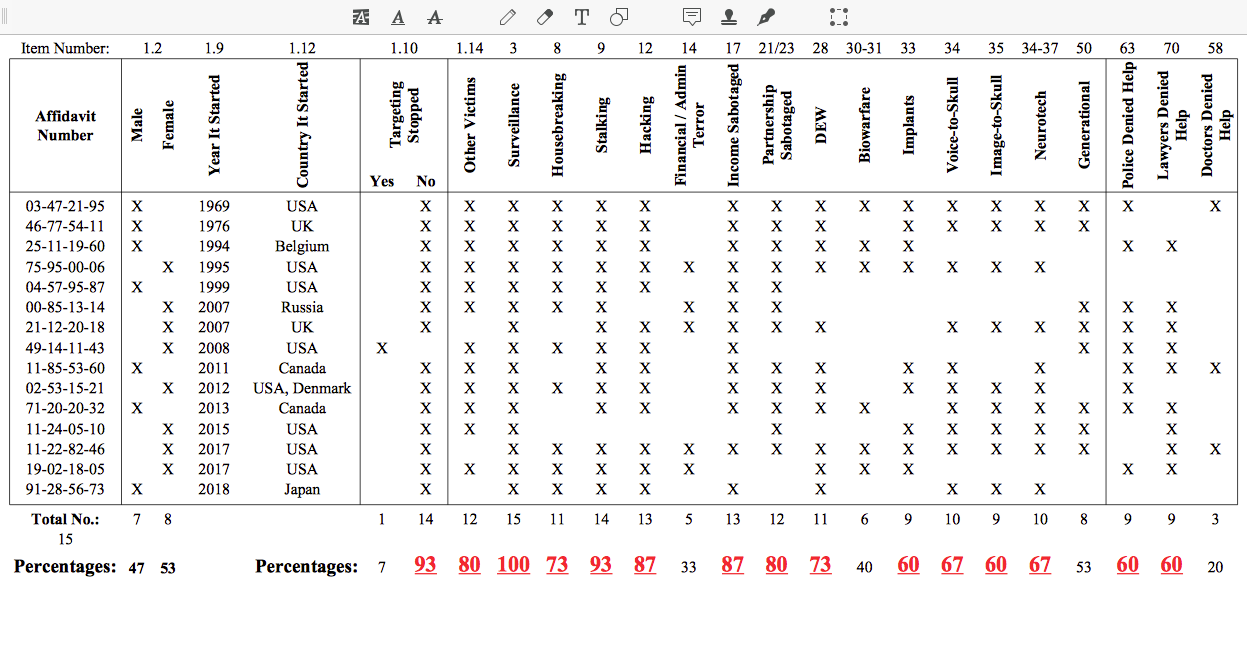 For example, The JIT Affidavit Analysis demonstrates that:

(1) In 60% of reported cases OF DEW attacks,  Police Departments denied help [law enforcement against DEW perpetrators] to the victims of DEW directed energy weapons attacks; and

(2) In 60% of reported cases OF DEW attacks,  Lawyers denied help [civil and criminal prosecutorial legal representation] to the victims of DEW directed energy weapons attacks; and

By comparison, the JIT Affidavit Analysis was released on the very same day – June 5, 2019 – that the Government of Canada released its spectrum authorization schedule for the 5G rollout in Canada for 2020, 2021 and 2022.   That Government of Canada spectrum authorization was issued without any public hearings or substantive science-based studies on the significant and detrimental public health and environmental impacts of 5G EMF technologies on Canadian populations in cities, towns and rural areas in which 5G technology roll-out in authorized.

Thus the JIT Affidavit Analysis, which demonstrated a substantial default of law enforcement and legal rights representation toward DEW directed energy weapons victims is foreshadowing the almost total abandon and default of the Government of Canada in authorizing as of June 5, 2019 spectrum authorizations for 2020, 2021, and 2022 without any regard of its public duty to defend the public health and well being against the demonstrated genocidal and ecocidal public health impacts of 5G technologies.  Moreover, in the specific case of Saskatoon, Sask., Canada, the City Council, Local Police Department and RCMP appear to be in aid of the deployment of genocidal and ecocidal 5G DEW EMF Towers in that area, again congruent with the findings of the JIT Affidavit Analysis.

Confirmation of Validity of Published Affidavits

To whom it may concern, I, Dr. Katherine Horton, particle physicist and systems analyst, and founder of the Joint Investigation Team US-Europe for Directed Energy Weapons, Military Neuro/Biotechnology and Systemic Corruption, state on oath and say as follows. I make this affidavit based on my own personal knowledge, unless otherwise stated, and that the following facts and matters are accurate to the best of my knowledge.

2. The details and purpose of the affidavit collection are summarised in the Explanatory Notes that can be downloaded along with the affidavit template from the Joint Investigation site https://jointinvestigation.org/appeals/appeal-for-affidavits/ and from my personal website, see https://stop007.org/home/burning-down-the-house/affidavit-collection/

3. The affidavits that are published on the websites, stated above in paragraph 1, were all submitted with a copy of photo-identification such as a passport, ID card or drivers licence. They were also submitted with a Statement of Truth signed before a witness who is a person entitled to administer oaths in the respective country of the victim. The witness confirms with a signature that the affidavit has indeed been signed by the person who claims to have completed the affidavit.

5. Investigators or courts raising doubts about the validity of a given affidavit can cross-check the affidavit with the version published on the sites stated in paragraph 1 above using the Document Authentication Code. Furthermore, they can take this document as a confirmation made under oath that all affidavits have been submitted with photo-identification and a Statement of Truth signed under oath before a witness.

6. Victims and investigators are free to download the affidavits published on the sites stated in paragraph 1 above and use them for investigations, to support witness statements and in support of court cases against perpetrators.