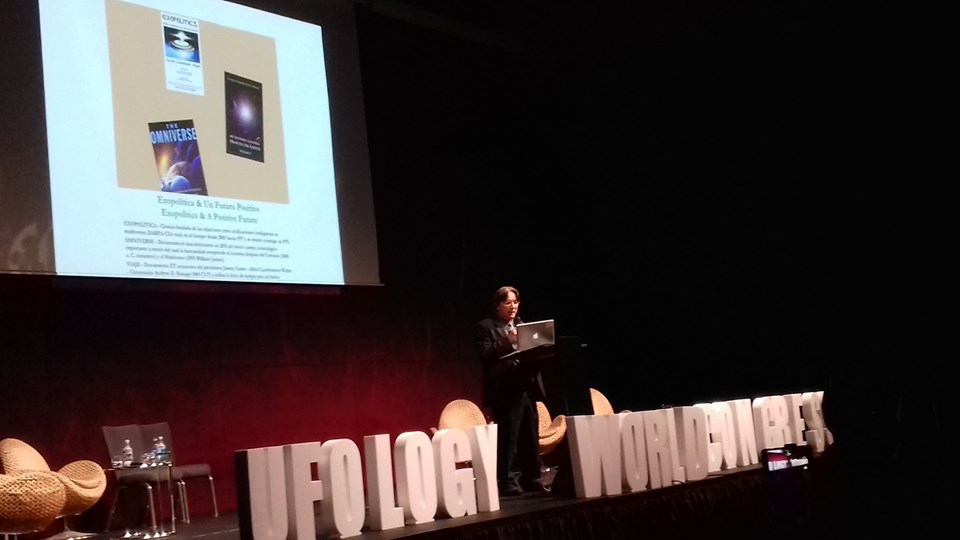 BARCELONA, CATALUNYA – In a tour de force article following the September 6-8, 2019 UFOlogy World Congress in Barcelona, Yahoo News reports on futurist Alfred Lambremont Webre’s Initiative to be an Earth representative to the regional Galactic Governance Council, the governance body of advanced intelligent ethical upper dimensional civilizations charged with overseeing life-bearing planets in this sector of our Milky Way Galaxy, and including the Pleiadians, the Alpha Centaruans, the Sirians and other civilizations.  Yahoo News journalist Melissa Rossi who spoke with futurist Webre at the Congress, writes:

“But one of the final speakers of the ufology congress, American author Alfred Webre, a self-described ‘international lawyer’ who writes books about “exopolitics” — the politics between Earthlings and aliens — raised the most alarming possibility: that extraterrestrials are coming to Earth to recruit human slave labor. ‘There are some estimates that 60 million humans are enslaved in industrial facilities in the solar systems, producing products used through the galaxy,’ he told Yahoo. Even worse, he said, some aliens, specifically the race known as Draco-Reptilians, believed to come from the Orion constellation, have a taste for human babies.

“Webre, who said he previously worked for the Stanford Research Institute, now SRI International, claimed he headed a project called the Extraterrestrial Communication Study, established early in the Carter administration but ‘stopped in its tracks by the Pentagon in October 1977.’ The reason, he said: The project was about to expose the fact that ‘the United States has had secret treaties with certain extraterrestrial civilizations’ — Orion Greys and Draco-Reptilians, to be specific — going back to FDR’s time. He said our world is actually being overseen by a regional galactic government of ‘seven or eight civilizations.’

“For all his lurid depictions of extraterrestrials, Webre had come to deliver good news in his speech at the congress. ‘The famous Brazilian prophet Xico Xavier,’ he said, made a prediction on July 20, 1969, ‘the same day the U.S. allegedly landed on the moon.’ In 50 years from that day, said Webre, “if World War III hadn’t broken out by then,” it would never happen, and humanity ‘would be rejoining the galactic community of nations’ — to which he hopes to be an Earthly representative. [Emphasis added – Ed.]

“His message was so crucial that Webre posted on his Facebook page that Hurricane Dorian was a ‘weather warfare event,’ meant to interrupt or overshadow his talk at the conference and the impending ‘reunification of Earth humanity with peaceful galactic communities.’

Excerpted from “A ‘turning point’ on UFOs: Physicist Michio Kaku tells ufology conference the truth is out there” By Melissa Rossi
https://news.yahoo.com/a-turning-point-on-uf-os-physicist-michio-kaku-tells-uf-ology-conference-the-truth-is-out-there-090005631.html

At the Barcelona Congress, futurist Alfred Lambremont Webre had led a workshop sharing with participants, “My insight is that fundamental positive transformation on our New Earth will take place when New Earth humanity is consciously and intentionally represented at the regional Galactic Governance Council, so that New Earth can have direct access on policy proposals and petitions for redress for New Earth and New Earth humanity’s progress and welfare in our dimensional ecology.

“To open the way for creation of this new position in Galactic governance, I ask your support for my initiative to be an Earth’s Representative on the Regional Galactic Governance Council

Futurist Webre states, “My Platform as a representative of New Earth to the regional Galactic Governance Council includes:

Excerpted from “Support My Initiative to be an Earth’s Representative on the Regional Galactic Governance Council”
By Alfred Lambremont Webre, JD, MEd
http://exopolitics.blogs.com/positive_future/2018/03/support-my-initiative-to-be-earths-representative-on-the-regional-galactic-governance-council.html

Emergence of the Omniverse 2020

Webre’s new book, EMERGENCE OF THE OMNIVERSE, is scheduled for publication in early 2020. At the Barcelona Congress, Futurist Alfred Lambremont Webre also delivered a lecture on the emergence of the Omniverse.  “The Universe, the Multiverse, the Omniverse,” Webre states. “These are the three principal cosmological bodies through which humanity comprehends the Cosmos.

“The equation expressing the Omniverse is:

Webre states that “A reasonable observer can conclude that prima facie empirical evidence supports the dimensional ecology of the Omniverse hypothesis.

“The totality of the spiritual dimensions (souls, spiritual beings and God) function as the Source of the universes of the multiverse.

Individuals, organizations, and media wanting to hear futurist Alfred Lambremont Webre speak on the Emergence of the Omniverse 2020; Exopolitics and A Positive Future; and in support of his Initiative to be an Earth’s Representative on the Regional Galactic Governance Council cam contact Alfred at: