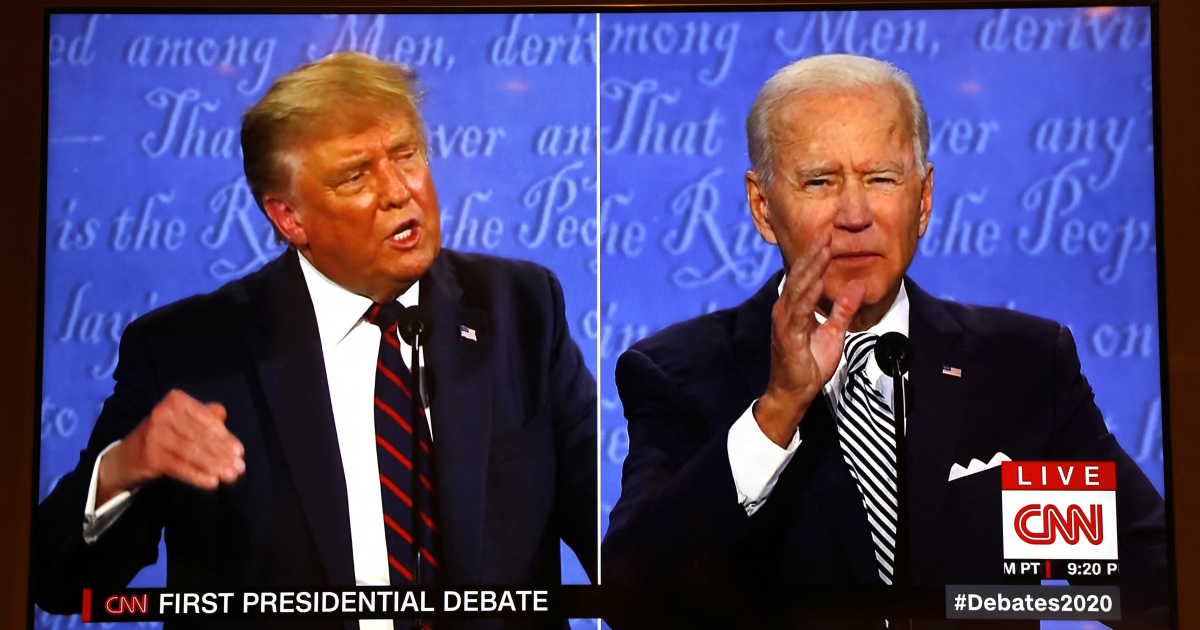 PEACE PORTAL, BLAINE WA – Donald J. Trump was preidentified in 1971 by secret US government quantum access technology as the winner of the 2020 Presidential election, and personally briefed and groomed as such. Should voters not be told this as part of an informed decision for their ballots?

As verified by eye-witness testimony from whistleblowers from a top secret U.S. government quantum access time travel program, using at least 8 different DARPA chronovisor and time travel technologies to access the future from locations in the past timeline, since at least 1971 the Central Intelligence Agency (CIA) and other agencies have been systematically and pre-identifying future U.S. Presidents, and secretly grooming them for their Campaigns and Presidencies.

Whether or not Joe Biden has been formally briefed that he will lose in the 2020 US Presidential campaign has not been determined as yet by the evidence, although it may be likely that as a 47-year veteran of Presidential politics, Biden may have informally briefed by DARPA-CIA Preidentified US President and fellow Democrats Bill Clinton and/or Barack Obama.

The Chronogarchy or Secret time travel government that monitors the timelines of public affairs, major events, and governments through quantum access time travel technology and then chooses and grooms operatives to carry out its policies, and creates COINTELPRO or social disruption campaigns against individuals it deems should not prosper in the timeline, such as whistleblowers from the secret DARPA-CIA time travel program.

The Chronogarchy uses the DARPA-CIA secret time travel pre-identification and monitoring/grooming/disruption program to choose candidates for US Presidential campaigns, and then uses the US Presidential Campaign to create an artificial political divide in the US population at large, pitting conservatives against liberals, Republicans against Democrats, demonizing each party against the other, all the while controlling each of the candidates that it preidentified and groomed up to a half-century earlier.

By this method of Divide and Conquer, the CIA and the plutocratic class it serves, maintains control over the deeper social needs and equitable social contract of the American people.

As Donald J. Trump was pre-identified in 1971 as a future US President elected in November 2020, I feel a scholarly obligation to share with your well-honed sense of judgement my published conclusions regarding the role of secret DARPA-CIA quantum access time travel technology in pre-identifying U.S. Presidents since 1971 and grooming them for office.

Our research demonstrates that, since 1971, all future US Presidents, including George HW Bush, Bill Clinton, George W. Bush, Barack Obama, and Donald J. Trump were pre-identified by secret US government quantum access technology. In 1971 and subsequent years, future US Presidents were briefed and groomed as to their future Presidencies by CIA.

The functional resultant is that public US elections are in some essential way a charade, thereby defeating the U.S. constitution.

Donald J. Trump will be elected US President in 2020 as preidentified by DARPA CIA time travel in 1971

As for the probable outcome of the November 2020 election, I have not been able to locate any further DARPA-CIA quantum access time travel preidentification evidence that suggests that anything other than that Donald J. Trump will be re-elected US President.

My deep concern is that the US and world public should know that Donald J. Trump was pre-identified in 1971 via secret quantum access technology as a future US President and groomed by DARPA-CIA as such.

I myself met with approximately 50 members of the DARPA CIA quantum access time travel program in 1971 when I was General Counsel of the New York City Environmental Protection Administration. DARPA-CIA wanted to meet with me as DARPA-CIA had time travel-teleported my 2000 book EXOPOLITICS: Politics, Government, and Law in the Universe from 2005 back to 1971 where it was viewed in house by Project Pegasus, DARPA-CIA’s secret time travel unit, including a whistleblower who would reveal all this to me in the early 2000s.

You can verify the context of what I am sharing here at the following links:

Implications for our Democracy

A working conclusion for our US constitutional democracy that I have published is that US public affairs are clandestinely controlled by a “Chronogarchy” or secret time travel government that uses quantum access technology to pre-identify political and other leaders and events and hence control policy directions and outcomes in our society, by passing the core role of the freedoms guaranteed in the U.S. Constitution and the Bill of Rights.

A group of us, including whistleblower US Chrononauts [Time travelers] have been working for quantum access disclosure, via lobbying in-house with the Presidential administrations, as well as on publically and in social media.

If after examining this material, this resonates with any of you, please feel free to contact me at peace@peaceinspace.org. Because Donald J. Trump’s uncle, John Trump was intimately involved with the development of quantum access, it morally behooves President Donald J. Trump to publicly disclose the clandestine role that quantum access has come to play in defeating our constitutional guarantees in public elections, and in much more.

Here is the evidence that we published prior to the 2016 US Presidential election regarding DARPA-CIA’s preidentification and grooming of Donald J. Trump as a future US President starting in 1971:

BLAINE, WA – As previously reported, former U.S. chrononaut Andrew D. Basiago, a whistleblower from the secret US time travel program, has described how as a child serving in Project Pegasus in the early 1970’s, he was present at lunches held at La Hacienda restaurant in Old Town Albuquerque, NM that were attended by project principals and future American presidents, including George HW Bush, Bill Clinton, and George W. Bush, shortly after they were informed that Project Pegasus had found via quantum access that they would one day serve as President. Specifically, Mr. Basiago attended a luncheon held for the Bushes and one held for Clinton after they were briefed about their future Presidencies and still processing the information.

Mr. Basiago, a childhood participant from 1968-72 in DARPA’s secret quantum access Tesla-technology time travel Project Pegasus, has also publicly stated that his father Raymond F. Basiago, had stated that both U.S. President Barack H. Obama and himself – Andrew D. Basiago, had been pre-identified by the Presidential time travel program as future U.S. presidents.[1]

Mr. Basiago’s father, Raymond F. Basiago, was an official in the CIA Project Pegasus time travel project, including the unit responsible for pre-identifying and briefing future U.S. President via time travel. Raymond F. Basiago, along with other CIA time travel officials, notified Andy Basiago of his own future destiny as U.S. President (although not of the exact year of a future Basiago presidency). Mr. Basiago was first told of his future presidency in 1980 during Mars jump room training, not in 1971. In the early 1970s Andy was permitted to sit in on a number of Project Pegasus secret time travel briefings of future Presidents.

Evidence of Donald J. Trump as elected 2016 US President

Andrew D. Basiago responded, “Alfred, as for Hillary Clinton, I have no data. I think it is reasonable to infer that were she a future President there would have been pre-ID of her tied up in pre-ID of WJC [William J. Clinton] as POTUS.

“As for [Donald J.] Trump, I have a vague memory that my father took special note of Trump during an appearance by him on The Phil Donahue Show and might have even commented that he was a future US President,” Mr. Basiago concluded.

No witness to any briefing of Donald J. Trump by representatives of the DARPA-CIA secret time travel program has come forward has come forward publicly as Mr. Basiago has in the case of other preidentified U.S. Presidents, including George HW Bush, Bill Clinton, George W. Bush, and Barack Obama.

Asked whether his statements are hearsay, Andrew D. Basiago responded, “My statement is not hearsay offered to prove the truth of the matter asserted that Trump will win the election. Rather, it is direct evidence showing that my father made the verbal act placing Trump among the individuals identified as future Presidents via the CIA’s quantum access capability.”

That Donald J. Trump may have been preidentified by secret US time travel is strengthened by the fact that Donald Trump does appear preidentified in a number of cultural references that could plausibly have employed time travel data leaked from the secret DARPA CIA time travel pre-identification program for purposes of social manipulation.

Back to the Future Movie – For example, predictions shown in the film Back to the Future II predictions continue to come true as Chicago Cubs win the World Series and Donald Trump rises to power. [2]
Illuminati cards – Election prophesy: Donald Trump’s assassination predicted by Illuminati card game. A card game believed to have predicted 9/11 and Princess Di’s death may have now foreseen the assassination of US presidential candidate Donald Trump. [3]