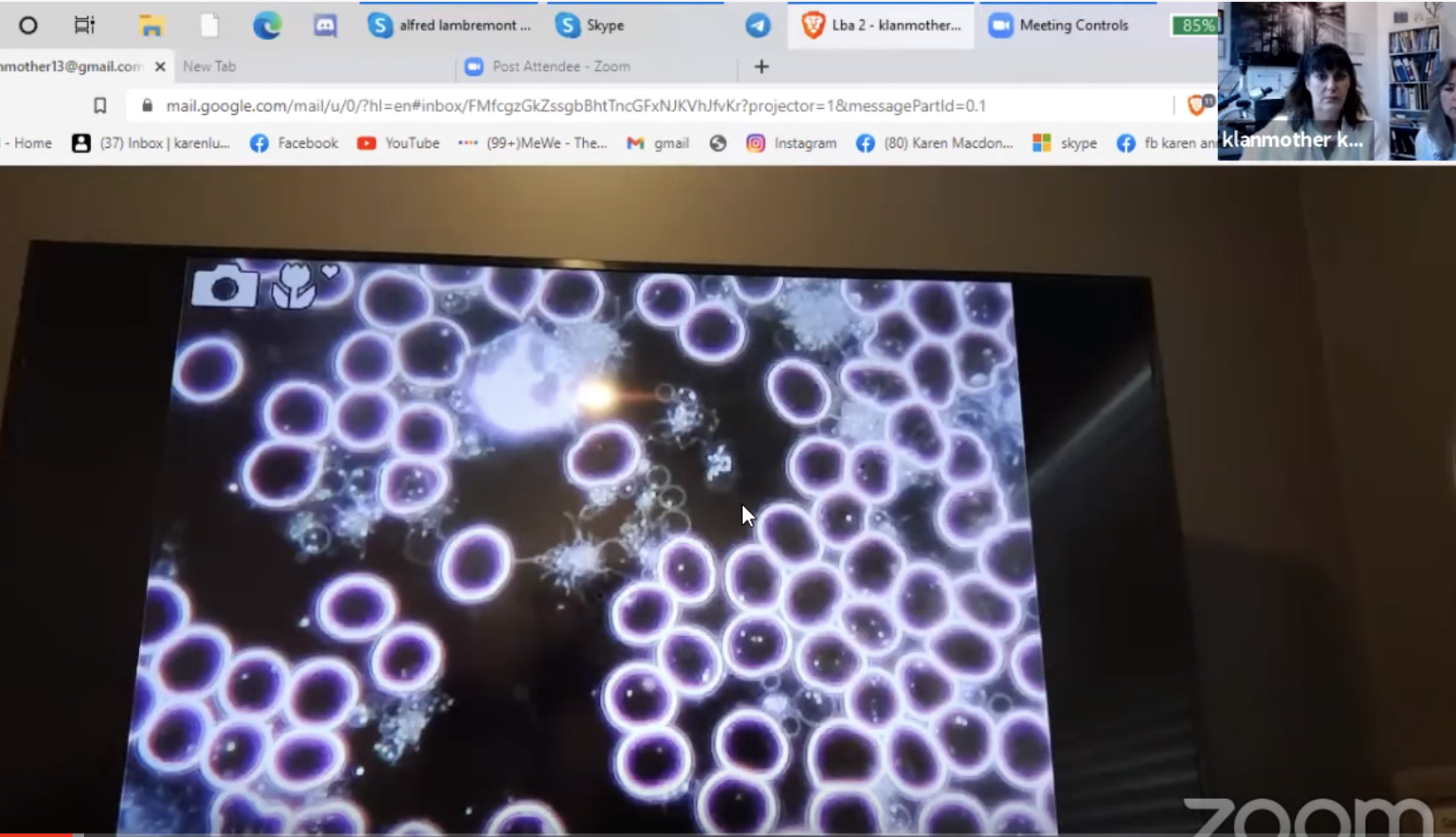 In this science-based clinical Panel with clinicians Nurse Klanmother Karen Lucyk MacDonald and Lloraine Andres at Kelowna, British Columbia, Canada, forensic evidence and lawful proof using Live Blood analysis is developed to demonstrate beyond a reasonable doubt that contagion and vaccinosis is taking place upon physical contact and proximity between unvaccinated persons and individuals who have taken the COVID 19 “vaccine” spike protein mRNA bio weapon, to the point that such contact contagion can – if not treated naturally as clinicians Karen and Lloraine demonstrate – lead to irreparable harm and death of the unvaccinated persons who have come into inadvertent contact with vaccinated persons.

These new science-based documents findings seen exclusively in this video Panel [censored by You Tube] come at a time where:

“According to OurWorldInData.org, 31.7% of the world population has been vaccinated with one or more covid vaccines. That’s about 2.4 billion people. In the United States, according to the CDC, 199 million people have been vaccinated with at least one dose.Notably, all the 2.4 billion people who took this vaccine around the world have taken an unproven, deadly, experimental medical intervention that was intentionally formulated to contain spike protein biological weapons, or in the case of mRNA vaccines, instructions for the body’s own cells to manufacture those spike protein bioweapons. Thus, the depopulation globalists pushing this vaccine genocide have managed to inject about one-third of the world’s human population with biological weapons that are well known to cause injury and death.

“Yet the question remains: Just how many of these [vaccinated] people will die from vaccine adverse events, including ADE?

A key question raised by this Live Blood Analysis is: how many unvaccinated people will die from inadvertent contact contagion with vaccinated persons who are acting as walking bioweapons shedding spike proteins?

Canadian Prime Minister Justin Trudeau is already indicted and convicted for genocide, crimes against humanity, and war crimes for authorizing genocidal COVID “Vaccine” mRNA bioweapons against Indigenous and non-indigenous Canadians, as violating the International Criminal Court Statute and Treaty of Rome of which Canada has signed and ratified along with 123 nations.

Now, having called a general election on a Platform of vaccinating Canadian Federal employees, Trudeau is unlawfully weaponizing vaccinated Canadian federal employees as mRNA spike protein bioweapons against the people of Canada  and violating his Oath of Office and must be removed from office for Treason and Moral Turpitude:

OTTAWA, Aug 13 (Reuters) – Canada on Friday said it will soon require all federal public servants and many other workers to be vaccinated against COVID-19, as it looks to boost its already world-leading inoculation rate amid a Delta variant-driven surge in new infections.

The vaccine mandate, which will also include air, train and cruise ship travelers, comes just two days ahead of an expected election call by Liberal Prime Minister Justin Trudeau and could prove to be a wedge issue in the campaign, with Conservatives quick to suggest it was an overstep. read more

Minister of Intergovernmental Affairs Dominic LeBlanc said that the vaccine requirement for public servants will be in place by the end of October and that he expects state-owned corporations and other federally regulated employers to follow suit.

“We expect the federal public service to want to comply with this mandatory requirement,” LeBlanc said in a news conference. “This is the best way to end the pandemic and allow the economy to safely remain open.”

He added that testing and other measures will be put in place for those who cannot be vaccinated for medical reasons.

Transport Minister Omar Alghabra said that employees in the federally regulated air, rail, and marine transportation sectors will also be required to be vaccinated, along with certain travelers.

“This includes all commercial air travelers, passengers on interprovincial trains, and passengers on large marine vessels with overnight accommodations, such as cruise ships,” Alghabra said in the same news conference.

A majority of Canadians support a proof-of-vaccination system, according to a July EKOS Research poll, though it is less popular with Conservative voters who are also less likely to be vaccinated than people who support the ruling Liberals.

A spokesman for Trudeau’s chief rival, Conservative leader Erin O’Toole, called vaccines the “most important tool in the fight against COVID-19,” but suggested the vaccine mandate was a step too far.

“Conservatives support Canadians’ right to determine their own health choices,” said spokesman Mathew Clancy in an email. “Canadians expect reasonable measures, such as rapid testing for those who are not vaccinated.”

That would be more in line with the United States, where the White House is requiring all U.S. federal workers be vaccinated or face regular testing and mask mandates. read more

A number of other countries have mandated vaccines for healthcare and care-home workers, and some require proof of vaccination to access public spaces like bars and restaurants. Canada is planning a vaccine passport for international travel. read more

Canada has one of the best inoculation rates in the world, with more than 82% of eligible people having one shot and 71% fully-vaccinated. Still, active cases have doubled in two weeks amid a Delta-driven fourth wave.

eagle-eye-man: INTERNATIONAL LAW, THE CLAN MOTHERS & BENEFIT OF BEING A SAVAGE

Introduction to the Foundation of International Law.

eagle-i-man, defacto international legal advisor: “We live in a world of law to the letter of the law. and the civilized do not break the law regardless of what it may seem like on the surface because they just make their laws such that they can do those things. Everybody comes from a tribe.”  Meredith Quinn: “It does not matter who you are, because whoever you are you are the direct descendent of a legitimate tribe and government that has signed treaty in the past.” If you go far enough back in your history you will find those treaties. This is all part of the discussion we will be having. Clan Mothers were and are the original supreme law of the land. The three classes of physical beings are under international law:

What exactly it means to be a Signatory Indian. The one exact identifying word to a Sovereign. What religion has to do with law and the absolute importance of semantics. How North American Indians of the U.S. & Canada as they’re commonly-known can literally take back their traditional territories by the Rule of Law :it is only ignorance of the law that allows civilized/Romans to take title to your territories. Right now the Indian Clan Mothers have the right to claim what is known as Cession Jurisdiction (Territorial Jurisdiction) which at the moment they’re not doing because they’re classified as prisoners of war rather than Signatory Indians.