You are here: Home / 2020 US Election / Time Screen: The 50-Year Secret Chronogarchy Plot to Breakup America 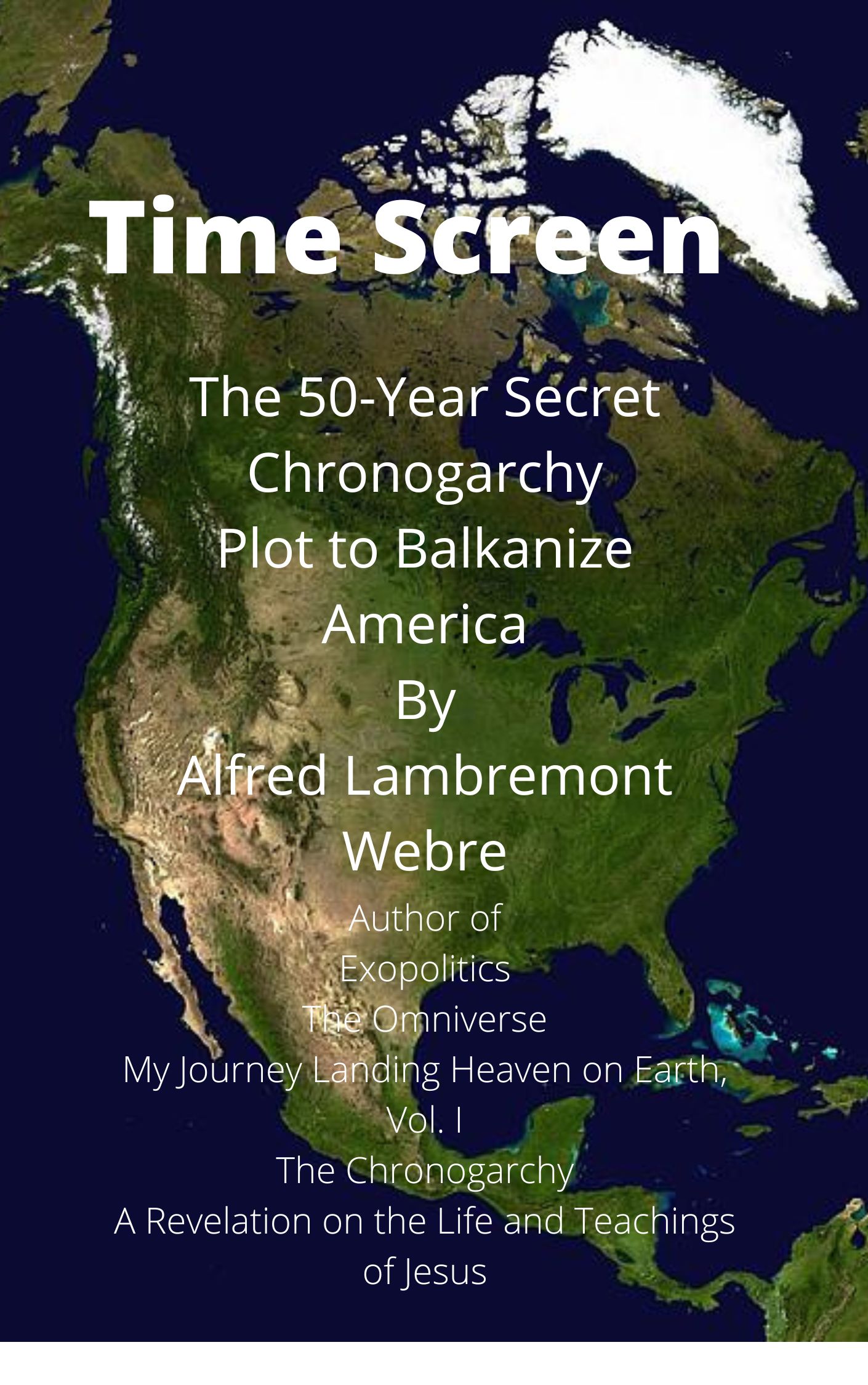 In this new book “Time Screen” (2023), futurist Alfred Lambremont Webre exposes a 50-year unlawful secret Chronogarchy plot to break up the Union of States in America and disassemble the Constitution of the United States of America through covert social engineering. Alfred recounts his 1971 meeting with the Top Secret DARPA CIA time travel unit in 1971 after DARPA-CIA time-travelled his landmark book Exopolitics from 2005 back to 1971 using classified quantum access technologies. Continuing the disclosure narrative, Alfred reveals a stunning January 1977 staff meeting with Stanford Research Institute futurist Director Willis Harmon who at the time had a 50-year Alternative Futures Study with the US Central Intelligence Agency, which had just time-traveled Alfred’s books back from 2005 back to 1971. Willis Harmon took Alfred, who had just joined the SRI futurist staff aside, and told him of the future Balkanization of the USA, “Alfred in the Future, the United States of America will break up into many regions.” Not only did the DARPA CIA time travel Chronogarchy foreshadow a future unlawfully caused break-up of the Union of States in America, but U.S. Presidents George H.W. Bush, George W. Bush, Bill Clinton, Barack Obama, Donald J. Trump, and Joseph Robinette Biden would be pre-identified and groomed on a common consensual policy by the DARPA-CIA Chronogarchy secret Presidential Time Travel preidentification program.

Time Screen focuses on new revelations about Donald John Trump, a key covert Chronogarchy time travel wrecking ball in the attempted break up of the Union of States in America, starting with the 1971 DARPA-CIA Top Secret quantum access time travel pre-identification, notification, and subsequent Chronogarchy grooming of Donald John Trump as a future U.S. President. The book documents a 40-year penetration of Russian intelligence into the “Real Donald Trump” becoming a deep cover Soviet and then Russian agent of influence and then Trump Tower becoming a known base of operations for the “Russian Mafia” ever since then.  With the Russian intelligence asset “Donald Trump’s” winning of the U.S. Presidency in November 2016, a preidentified by DARPA-CIA time travel, a covert Russian spy became US President hosting the Russian Foreign Minister in the White House Oval Office with no official witnesses, and accounting for the determination of the FBI, CIA, and other American authorities act to remove and block Trump through first the “Russian dossier”, then two impeachments, a “managed” 2020 US Presidential election loss, the Congressional January 6, 2021 Select Committee, the 8.8.2022 “Lion’s Gate” FBI Search and Seizure of Trump’s headquarters at Mar A Lago, on Espionage grounds.

Taking the January 6, 2021 U.S. House of Representative Hearings as another point of departure, Alfred’s new book focuses on many of the structural signs of a possible coming Chronogarchy time travel manufactured Balkanization or breaking up of the constitutional Union of the United States of America, including the 2022 adoption by the Texas State Republican Party of a plank calling for the secession of Texas from the United States, and a recent poll showing that a plurality of Trump voters in Trump leaning states favor secession from the Unites States of America – “About 33% of Trump voters in so-called red states say they’d personally fare better if their state ‘became an independent country.’”

According to Author Unger, Craig, “Less clear to Americans, and far more ominous, was the fact that the leader of their party, Donald Trump, once and always a KGB asset, was following a path that appeared to be straight out of the Kremlin playbook. He effectively had transformed the GOP, once the Party of Lincoln, into an American version of the Party of Regions, the notoriously corrupt and treasonous Ukrainian political party that looted Ukraine’s coffers and blindly followed the dictates of Vladimir Putin. And with their hands on the levers of powers in the statehouses, the entire judiciary, the nation’s highest courts, and more, they were still very much a powerful force to be reckoned with. The battle was not over yet from “American Kompromat” (p. 304). Penguin Publishing Group, Kindle Edition.

According to the Author of “Time Screen”, who on the Natural and Common Law Tribunal for Public Health and Justice at http://www.Peaceinspace.org is Judge Alfred Lambremont Webre, JD, MEd, CERT Public Health, “Donald Trump seeks to make America an Autocracy, not a Democracy as required by our constitutional Union. As Trump does so in fulfillment of intentional covert contractual, political, and moral obligations as a covert agent of influence of the Soviet Union and then the Russian Federation, he does so as a covert and intentional Traitor to the Constitution of the United States of America, in violation of Article III Section 3 of the US Constitution, and as a violator of Articles 7 & 8 [Genocide & Crimes Against Humanity] of the International Criminal Court Statute.”

Now on Pre-Order, and with a publication date of July 4, 2023, Alfred’s new book presents solutions for the body politic of the United States of America so that the positive American Experiment does not fall victim to covert, time travel predicted projections of the Chronogarchy.