You are here: Home / AI Artificial Intelligence / Omniversity.net: Timothy Cohen – The AntiChrist and A Cup of Tea – King Charles III in An Age of AntiChrists 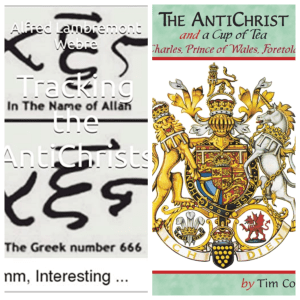 Omniversity.net: Timothy Cohen – The AntiChrist and A Cup of Tea – King Charles III in An Age of AntiChrists

Called by God in 1987 to be “him who has understanding” (Rev 13:18) — while a United States Air Force Academy cadet — Timothy Cohen is today an internationally recognized Christian author, speaker, and teacher.  He has researched and written what many are now coming to view as Christendom’s foremost prophetic and theological works (Rev 19:10), to include The AntiChrist and a Cup of Tea as well as the Messiah, History, and the Tribulation Period multi-volume series.

Along with The AntiChrist and a Cup of Tea (Rev 13:18), Tim Cohen’s forthcoming Messiah, History, and the Tribulation Period series offers a real and deep insight into the prophetic scriptures.  Tim’s teaching therein represents a genuine paradigm shift in Christian understanding of both The Person and the work of The Messiah — the testimony of Yeshua (Rev 19:10).  As such, it illuminates biblical theology and will, over time, redefine the best in Christian understanding and teaching.  The saints will understand both the written and living Word of God more deeply and more fully than previously.  Within Cohen’s volumes, you will see many hidden treasures of God’s Word and learn biblical wisdom; you will be taught things that few understand, what some obstinately or ignorantly refuse to investigate or consider, or even perilously choose to ignore — despite the great strength of the evidence.  Future theologians and historians will, we believe, come to recognize Cohen’s books as the new theological standard in several areas of study.  For example, Cohen unveils the first-ever unified school (and theory) of Christian theology, one that encompasses the whole of eschatology and eschatological interpretation — a true Messiah-centered approach called the “Messianic view” — in Messiah, History, and the Tribulation Period.  This is well beyond the “scholarship” of today’s Christian seminaries and Jewish schools, and yet Tim Cohen makes it biblically testable and easy to grasp.  This will change the way you think about and perceive God and Yeshua.

Tim’s books are written for all levels of Christianity, from the babe in Christ to the “scholar of scholars.”  They are clear and easy to follow, yet packed with more information than would typically be found in several times as many pages of other authors’ writings.

A Revelation On The Life and Teachings Of Jesus
My Journey Landing Heaven on Earth: Vol. II
By Alfred Lambremont Webre

BOOK REVIEW: “This is a most interesting and thought-provoking take on the life of a Jesus. A must-read for anyone with a curious mind!”
A READER: “A Revelation led me to my discovery of the Urantia Book.”
Author Alfred Lambremont Webre has published in “A Revelation On the Life and Teachings of Jesus” a Report on the Chronogarchy’s – DARPA-CIA and the U.S. Government’s – creation of Top Secret Quantum Access Time Travel Video Documentaries Of The Historical Crucifiction And Resurrection Of Joshua ben Joseph, Jesus of Nazareth, made public by the whistleblowing of US Chrononaut Andrew D. Basiago, an eye-witness to the time travel video documentary of Jesus Crucifiction. The publication of this Chronogarchy Top Secret Quantum Access Jesus Project provides direct forensic evidence of the Truth and authenticity of the Synoptic Gospels of Matthew, Mark, Luke and John, and importantly of Part IV of a Fifth Epochal Revelation, The Urantia Book: The Life and Teachings of Jesus, and forms a basis for “A Revelation on the Life and Teachings of Jesus”. The Chronogarchy is “an interdimensional hidden power structure monitoring the time-space of Earth as its domain of influence, operating as a secret government using quantum access Time Travel technologies to carry out its operations and mandates.”

In a new book “Tracking the AntiChrists,” futurist Alfred Lambremont Webre, originator of the Sciences of Exopolitics and of the Omniverse in his iconic Exopolitics book and Omniverse Trilogy, applies the Spiritual remote viewing tests of Chapter 13 of the Book of Revelation and to the many candidates for prophesized global AntiChrist emerging in our post-modern Era: the Chonogarchy Deep State; Sentient AI Artificial Intelligence; Mohammad Bin Salman; Donald Trump; The Rothschilds; The Pope; UK Prince William; Vladimir Putin; UK King Charles III & More.

16 And he causeth all, both small and great, rich and poor, free and bond, to receive a mark in their right hand, or in their foreheads:

17 And that no man might buy or sell, save he that had the mark, or the name of the beast, or the number of his name.

18 Here is wisdom. Let him that hath understanding count the number of the beast: for it is the number of a man; and his number is Six hundred threescore and six.

“Tracking the AntiChrists” shows that the prophesized planetary AntiChrist will manifest immediately prior to the prophesized “Second Coming” of Jesus, the human manifestation of the Creator God of our Local Universe. As with Alfred’s ground-breaking 2022 book “A Revelation on the Life and Teachings of Jesus” (UniverseBooks.com), his new book “Tracking the AntiChrists” shows that Earth has not yet reached the Golden Age time of the Second Coming of Christ. Hence, none of the named “AntiChrist” world figures of our post-modern era are the prophecized “AntiChrist”.

In his new book “Tracking the AntiChrists”, Alfred sets out Spiritual practices, and community and global policies to assist in creating New Earth conditions for a Golden Age time of the Second Coming of Christ.

Futurist Alfred Lambremont Webre is a change agent whose principal activities are (1) founding the science of Exopolitics through his 2000 book Exopolitics, (2) discovery of the Omniverse 2014 as the 3rd major cosmological body after the Universe and the Multiverse through which humanity understands the cosmos, as set out in his 2014 book DEO: Dimensional Ecology of the Omniverse, (3) promulgation of the Positive Future Equation [PFE] though which humans co-create a positive future on planet Earth, published in his 2017 book My Journey Landing Heaven on Earth, (4) public exposé in his book Chronogarchy, of an interdimensional hidden power structure monitoring the time-space of Earth as its domain of influence, and operating as a secret government using quantum access Time Travel technologies to carry out its operations and mandates, (5) A Top Secret Time-travel-based A Revelation on the Life and Teachings of Jesus; (6) Time Screen, a public exposé of the 100-year secret Chronogarchy plot to break apart America in his book Time Screen (2023), and (7) Tracking the AntiChrists