BRUSSELS – When asked if she wished to have her own talk show today to let the world know how the medical system and NSA mind control in the Transhumanist Agenda have now led to a Medical Professor blocking an operation to remove a lethal Motorola/NSA weapon from her throat, TI Melanie Vritschan, mother of a six year old boy, responded:

“Not really, as I honestly do not know how long I’ll still be here. The strangulation technology has moved again further constricting my windpipe. It makes it difficult not only to breathe, but also to talk, as there is one of these leads with implants in my tongue, also. Also it is difficult for me to plan anything and to keep a schedule being constantly tortured. At least, if I should “follow Rauni” in not so distant time, I consider having done everything I could to wake people up and make them stand up for their children’s rights, their children’s children’s rights as well as their own.”

Dr. Rauni Kilde, Melanie Vritschan’s colleague at EUCACH.org, was assassinated by NSA and the Transhumanist Agenda networks in hospitals and compromised medical and other networks

Melanie Vritschan continues to move forward to get a medical approval for removal of the NSA/Motorola lethal weapon from her throat before she is killed. Your support and donations are welcome at mvritschan@skynet.be 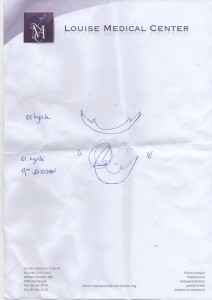 FIGURE A is a physicians drawing of the deformations in Melanie Vritschan’s hyoid bone throat area, reportedly caused by the NSA-DARPA-Motorola nanotechnology.

The NSA/CIA Pegasus strangulation nano-technology was developed by DARPA and Motorola and is now promoted by Regina Dugan, Barack Obama’s first Director of DARPA. This reporter has previously revealed that Obama and Dugan were fellow participants in a 1980s CIA Mars teleportation program and Mars colonization program that experts have now stated was under the over-all directorship of Richard B. Cheney.

Dr. S’s affidavit confirmed both the existence of the DARPA/Motorola strangulation nano-technology, and of the NSA delivery system. Relevant portions of her affidavit read as follows:

EXHIBIT A – LETTER TO FORENSIC PHYSICIAN

Dear Dr. VG,
A friend American radiologist – Dr. DL – confirmed your reading, namely a shift in my last hyoid noted by CT scan. It would certainly be wise if not desirable to also seek the advice of a medical examiner on the displacement of the bone. Without seeing your drawing, D had quickly replied that: “I Looked at the scan The left side of your hyoid is Displaced medially..”

Indeed, as I said in consultation, I feel a consequent discomfort constantly, pain and a growing feeling of constriction, with which it is increasingly difficult to live.

Industrial toxicologist – Dr. HS – describes in his statement under oath that attached the “throat area nanotechnology innovative” causes pain and constriction sensations in people with this condition (see paragraphs 8, 9 and 12) .

I also attach the document “Motorola patents tattoo e-throat”, in which there is a drawing of this technology around the neck of a mannequin surrounded a “throat microphone.” That seems very accurate; my Adam’s apple is also compressed, which makes me very badly. I also copies Dr. L for its information: He has my complete file and followed me from the beginning of my illness. He can take notice of your drawing, which quite impressed me.

After undergoing a minor procedure in February for which I should have taken another medical recommendation or request additional information, so I would like to have the opinion of the coroner, because I’d like to be well documented and be prove justification for each future intervention.

In this case, it seems nevertheless established me, because I know that a fracture of the hyoid bone is proof of death by strangulation for forensics. I will provide documentation of Dr. S – who dedicated his life to the study of nanopathologies often largely unknown – the coroner before making an intervention.

Perhaps you have already had the opportunity to also share with your colleagues about my medical problem?

I will quickly go in consultation so that we can discuss and decide together.

Melanie Vritschan’s Internet was threatened to be cut off within days of the filming of this video on March 6, 2015.  If you would like to contact Melanie Vritschan with your support and/or financial donation to EUCACH to keep their Brussels-based Internet and office running, you can do so below: