VANCOUVER, BC – Speaking on PressTV, futurist Alfred Lambremont Webre stated the legacy of genocide and dysfunction can only be erased and a new life given to Canadian First Nations by granting Canadian Aboriginals full constitutional sovereignty in Parliament and under the Canadian constitution, as Quebec and Anglo Canada possess, taking Aboriginals out from under the cultural prison of the Indian Act. Under this solution, First Nations, Quebec, and Anglo Canada would each be recognized as sovereign under the constitution of Canada, and each would send delegations of Parliamentarians to the House of Commons and the Senate of Canada.  Only by being fully at the table with Quebec and Anglo Canada will the Aboriginals get a fair share of Canada’s resources, and end to their social and police state oppression under the Indian Act, and full entry into the cities and countryside of Kanata.

Such full constitutional participation as the French and Anglo Canada is the Aboriginals right under Natural law, International humanitarian law, the United Nations Charter of Human Rights, the constitution of Canada notwithstanding any prior treaties separately signed under duress or misunderstanding of the law.

This solution would also recreate the balance of Aboriginal confederations like the Iroquois confederation and create a new fusion form of democratic government based on Aboriginal inclusion on Westminster-based parliamentary Common Law democracy.  The resulting positive political and cultural dynamics of the new fusion parliamentary democracy would stop the downward spiral leading to the suicide pandemics and bring about a revival of our sovereign Canadian Aboriginal culture and population.

Futurist Webre was asked to comment by Press TV, following suicide attempts on Saturday April 9, 2016 by 11 individuals in the Northern Aboriginal community of Attawapiskat, Ontario. The suicides came after a “healing walk” and a ceremony attended by about 200 of the community’s 2000 residents to hear youth talk about “pain and struggles”.

From 100 million Aboriginals when white settlers arrived to 1.4 million at present

In his PressTV interview, Futurist Webre notes that when the European colonists arrived in Canada, there were 100 million natives of Canada living here. Of this 100 million population group, only 1.4 million remain alive now as a group and 98.6% of the 100 million member population group has been genocided. This is a profound social cataclysm of the Canadian Aboriginal population of which the Canadian settler society remains in deep denial.

On top of this, the Residential School program was a cultural (and physical) genocide program further abetted by the Churches (Roman Catholic, Anglican, and others), the UK Monarchy, and the Government of Canada that led to the social dysfunction that played itself out in the suicides of April 9, 2016 in Attawapiskat.

Suicide among the leading cause of Canadian Aboriginal death

Suicide is among the leading cause of Aboriginal death in Canada. Almost 130/100,000 aboriginal men commit suicide in Canada as compared with just over 20/100,000 Mainstream settler culture Canadian men. A 2015 United Nations Human Rights commission report was highly critical of Canada on the issue of murdered or missing Aboriginal women. 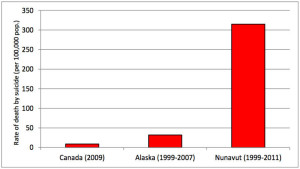