VANCOUVER, BC – In a NewsInsideOut.com interview with Alfred Lambremont Webre, Filmmaker Patty Greer reveals that her new film Crop Circle Diaries discloses a key secret discovered by scientists – that Mother Earth is the CropCirclemaker! 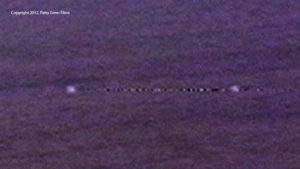 “Patty Greer takes the study into a new realm of possibilities with conclusive evidence that Plasma Balls of Light are involved in the creation of many Crop Circles – in 4 of her films. Her new movie, “Crop Circle Dairies” introduces Penny Kelly, the silent lab partner of the late great scientist William Levengood for the last 15 years of his life. Their research, evidence, and scientific conclusions are extremely important and advantageous for natural healing and ultimately the improvement of our agricultural quality and abundance. Their research was hidden through a series of lies about a PhD, and the public fell for it. The truth is very different than what we were told, therefore Greer’s final Crop Circle movie.

“Blending Patty’s years of experiences in the UK Crop Circles with the research of Levengood and Penny, “Crop Circle Diaries” brings science & reality together into a story about the phenomenon that makes sense. Patty shares some of her strangest experiences in the UK Crop Circles while Penny grounds the stories with science and psychology. Soon you will understand what it feels like to be inside one of these grand geometric formations, and how truly life changing they can be. Patty believes that the Earth, Human Consciousness and ETs have been co-communicating through Crop Circle messages for centuries. Her movies & talks are like a backstage pass to unraveling these multidimensional communications that have been left like sticky notes in farm fields around the world for at least 200 years that we know of. Bridging the gap between metaphysics, ET technology and science, Levengood’s research answered Greer’s final questions thoroughly.” 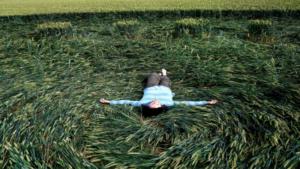 Patty Greer in a crop circle in UK

According to her bio, “Patty Greer is a fearless film maker who took her cameras into the UK Crop Circles in 2006, 2007, 2008, 2010, 2011 and 2014. In August of 2007 she had a “Contact” experience in an English Crop Circle that altered the course of her life dramatically. She awakened from the experience with a relentless passion to understand the Crop Circle phenomena further & film them day and night. With no training or experience in filmmaking or UFOlogy whatsoever she produced 8 UFO films in record time, 9 years. Patty usually went into the Crop Circles alone. She was always silent once inside and would head for the center & lay down. This is how she listened* Sometimes she went into the Crop Circles at twilight, which very few people would do. She was fearless & recalled the first time she climbed into a Microlite airplane to fly over the Crop Circles. The pilot asked if she wanted her door on or door off? At first she laughed but he wasn’t kidding, so she flew with the door off even on windy rainy days. If there was a new Crop Circle reported anywhere in Wiltshire, nothing could stop her from visiting it, flying over, and filming.

“Patty was relentless & determined & had great gear. She visited more than 100 UK Crop Circles personally and developed a telepathic communication with what seems to be the “Circlemakers.” She believes this is how the movies were written and co-produced; through telepathic communications at 3 AM. She wrote down what she was told and was always in the right place at the right time with cameras for the next few days. It seemed almost effortless to produce the films and the movies received 6 prestigious awards; 3 Best Film, Audience Favorite & Best Music. Greer enjoys the creative process & claims that the productions were produced completely organically. Live in the fields, spoken in the moment rather than pre-written, and produced through intuition and multi-dimensional guidance. Unfortunately she attracted 2 different film distributors early on who (coincidently) felt it was “in their best interest to hide her films from the public and make sure she had NO income for years.” Good news: She moved on with 4 new movies that go much deeper into the science of Crop Circles than her earlier films.”

According to Patty Greer, seeds planted in crop circles yield 40% more food and 70% more nutrition. As discussed in this exclusive interview with Patty Greer, he Crop Circle phenomenon can be technologized with Unity Consciousness and Love and provide and bountiful 4th/5th density Earth here and now.

The World Premiere of Crop Circle Diaries will be in less than a month at “Contact In The Desert” in Joshua Tree, California on June 4th, 2016. DVDs and streaming will be available on her website by the end of May 2016.