You are here: Home / Alfred Lambremont Webre / Terry Tibando: A Citizen’s Disclosure on UFOs and ETI: Global Evidence of the UFO and ETI Presence – Volume 1

Terry Tibando: A Citizen’s Disclosure on UFOs and ETI: Global Evidence of the UFO and ETI Presence – Volume 1

VANCOUVER, BC – In this two-part interview with Alfred Lambremont Webre, Author, researcher, and Experiencer Terry Tibando discusses Volume 1 of his 6-book master work A Citizen’s Disclosure on UFOs and ETI: Global Evidence of the UFO and ETI Presence – Volume 1.

Global Evidence of the UFO and ETI Presence “is the first book in a series of six volumes that was originally written as a single 3500 page treatise entitled “A Citizen’s Disclosure on UFOs and ETI”. Together, this series of books are the most comprehensive and definitive books of their kind offering the novice and clear path for further research as well as offering the seasoned UFO investigator some thought provoking alternative insights.

“With a massive bibliography, webliography and videography each book becomes interactive with numerous web links expanding and already colossal book into an encyclopedic tome. These volumes are sure to become your go-to UFO and ETI reference manuals.

“Each volume stands complete filled with hundreds of coloured photographs presenting the best evidence on the UFO and ETI phenomenon from a citizen’s perspective that draws from the author’s 65 years of personal experiences, contacts, research and investigations.

“In Volume One “Global Evidence of the UFO and ETI Presence” you will learn:

• Human history is far older than previously thought and that our evolution has been frequently influenced by an ancient ET presence as found in caves paintings, ancient petroglyphs and medieval artwork.

• The UFO Community has been ghettoized with a corrupted UFO data base compounded by misunderstanding from within and by a propaganda campaign of deception by the military industrial complex.

• Most Ancient Alien Theorists have through re-interpretation and speculation promoted widely held misconceptions of what is actually in the holy books of the world’s major religions.

• Do some religions speak specifically about life on other planets in their holy texts? Surprisingly, a young world-embracing religion may hold some of the best answers and insights into the UFO question.

• What are the characteristics and phenomenology of unidentified flying objects?

• The similarities and unique differences of the global UFO/ETI phenomenon that are often suppressed by governments and their military and intelligence communities.

• The psychology of UFOs and its effects on the human witnesses from leading psychologists.

• What is the Extraterrestrial Hypothesis and how does it differ from the other related hypotheses?

• Categorizing the kinds of UFO encounters and the classifications of Extraterrestrial Intelligences visiting the Earth.

• Knowing the differences and similarities between extraterrestrial and paranormal realities.

“The journey into a bigger universe has just begun and the exploration promises to be mind-blowing, exhilarating and positive! Enjoy the ride!” 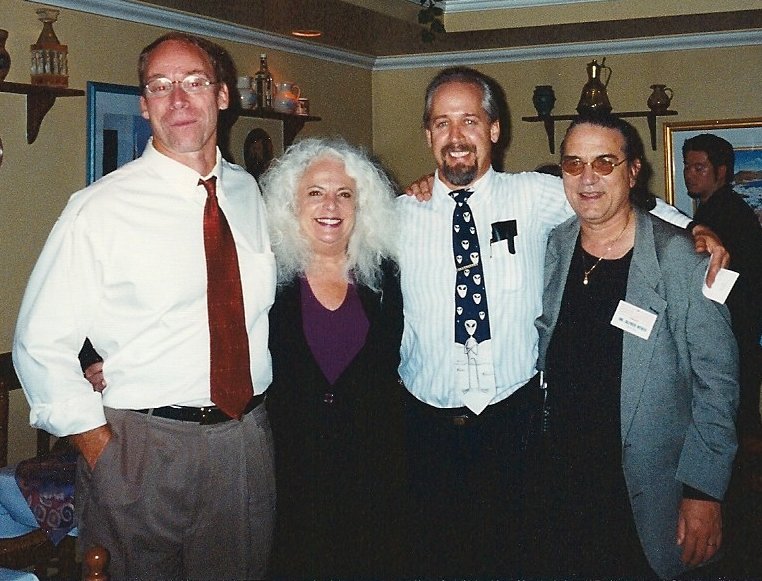 “This is Terry Tibando’s first book on the subject of UFOs and ETI and although, new to the literary world, his background and understanding of this phenomenon expand over 60 years of personal UFO sightings and ET contact which began when he was five years old followed by a lifetime of many other-worldly sightings and encounters. Thus, began a journey into the mysterious universe of Unidentified Flying Objects, Extraterrestrial Intelligence and the paranormal. As an experiencer, researcher, and investigator in Ufology he is more than qualified to talk and write with some expertise on this topic. It would seem that when growing up, other members of his family had their own UFO sightings. Even his father who served in the Royal Canadian Air Force as a Nuclear Civil Defense instructor at the high-security underground facility of the NORAD SAGE site in North Bay, Ontario, had his own amazing UFO sighting. In 1951 he saw a saucer shaped craft emerge from an air force hangar in Moulton AFB that flew into the air, hover briefly and then descended back into the hangar. In the late sixties, Terry began attending UFO lectures while in high school meeting such people as Dr. Edward Edwards, a linguist from the University of Victoria and Daniel Fry from New Mexico, USA, a well known contactee and UFO author. Terry attended the University of Victoria majoring in astronomy, physics, math and other sciences, yet, everything he was studying was always leading him in his search for answers that would bring him closer to understanding the nature and reality of extraterrestrial life in the universe. During those university years other alien craft were sighted near his family’s home in Victoria leading Terry to theorize that a possible ET undersea base exists off the coast of Vancouver Island which would account for the numerous UFO sightings seen over the Island. He was a former member of APRO (Aerial Phenomenon Research Organization) and its Canadian sister organization CAPRO during the sixties. His investigative research culminated back in the summer of 1996 when he met with Dr. Steven M. Greer during a one week “Ambassadors to the Universe” training seminar. They soon discovered that they shared similar UFO/ETI experiences during their early life as well as being “spiritual brothers” as fellow members of the Baha’i Faith. Terry was a standing-in speaker for Dorothy Izzat of Vancouver at the Bellingham UFO Group (BUFOG) UFO seminar in 1996, and as a panel speaker along with Peter Davenport from NUFORC and Sharon Filip, alien abduction researcher. He has talked on the Grimerica blog talk radio and been interviewed on the Discovery Channel during their “Alien Week” series in 1997 which had two ET spacecraft show up during the TV interview; he has been interviewed on BCTV News, and appeared briefly in Dr. Greer’s successful documentary movie “Sirius” and was a major financial contributor to the current documentary “Unacknowledged”! He was instrumental in coordinating, hosting and emceeing the first Disclosure Project event on UFOs and ETS in Canada as a part of Dr. Greer’s Disclosure Witness Tour held at Simon Fraser University in Vancouver on September 9, 2001, which included guest speakers Dr. Steven Greer, Dr. Carol Rosin and Dr, Alfred Webre. For the last 25 years, Terry has lead teams of people on field expeditions as the CSETI Vancouver Coordinator successfully establishing contact and communications with extraterrestrial intelligences visiting the Earth.”

Terry Tibando: A Citizen’s Disclosure on UFOs and ETI: Global Evidence of the UFO and ETI Presence – Volume 1
with Alfred Lambremont Webre
WATCH ON TRUETUBE.CO https://youtu.be/DZkWVyYSjwQ

ACCESS A Citizen’s Disclosure on UFOs and ETI: Global Evidence of the UFO and ETI Presence – Volume 1
AMAZON
https://www.amazon.ca/s?k=a+citizen%27s+disclosure+on+ufos+and+eti&ref=nb_sb_noss