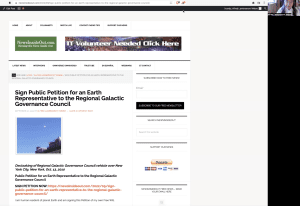 I am a human resident of planet Earth and am signing this Petition of my own Free Will.

I understand that the Regional Galactic Governance Council consists, according to the information supplied by Canadian NORAD Officer Stanley A. Fulham, of the following intelligent civilizations and has been an overseer of Galactic Public Affairs on planet Earth for approximately the last one million years.

As a concerned resident and citizen of planet Earth I hereby make a public Petition under Natural Law, Universal Law, Galactic Law that Regional Galactic Governance Council (the “Council”) make our planet Earth a member of the Council and appoint initial Earth Citizen Representatives concerned and informed about the Council to represent Earth’s Affairs.

I Petition that the Council publicly make known the process and identity of appointing its Earth Citizen Representatives with meaningful input from Earth citizens, including this Public Petition process.