VANCOUVER, BC – In a NewsInsideOut.com interview from Spain with Alfred Lambremont Webre, Magnus Olsson, director and founder of EUCACH, describes the launch of the World Coalition Against Covert Harassment (WorldCACH) against a Transhumanist Agenda based on directed energy weapons and other neural advanced technologies (including HAARP and nanotechnologies) for altering the morphology, DNA, and operation of the human brain and mind.

This Transhumanist Agenda is under the operational control of Artificial Intelligence, the Central Intelligence Agency (CIA), the National Security Agency (NSA) and, according to Magnus Olsson as of two years ago had already fully entrained a pilot program of 6 million individuals in Europe and others in the United States into banks of supercomputers programmed via HAARP and run via remote mind and personality entrainment.

In his interview, Magnus Olsson describes a harrowing episode during the weekend of 27-28, 2016 when he was targeted by remote neural weapons and nearly died, saved by intensive care of 12 physicians in a local hospital in Spain. The attending physicians were at first puzzled as Magnus Olsson’s symptoms were contraindicated by standard medical tests, which shown normal body functioning.
After WorldCACH Vice President Gary Owen and others explained to the physicians that Magnus Olsson was under attack by remote neural directed energy weapons and showed them a number of Magnus websites, the physician team was able to take more effective measures to save Magnus life as they now understood a more advanced medical paradigm for healing. 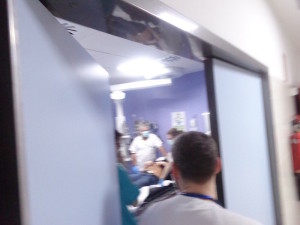 In his interview, Magnus Olsson describes the launching of the World Coalition against Covert Harassment (WorldCACH) initially in numerous nations including India, Spain, Sweden, Belgium , USA, Canada, Poland, and UK. Magnus Olsson indicated that a number of prominent whistleblowers who have brought to public light this covert agenda that the CIA, NSA, and other intelligence, corporate, and other organizations are carrying out, including William Binney and others former NSA, MI5 and MI6 personnel who are familiar with the technology, methods and aims of the Transhumanist Agenda and have turned against it, are joining World CACH efforts as well.

In his interview, Magnus Olsson indicated that the goals, mission and activities of the World Coalition against Covert Harassment (WorldCACH) including providing education, medical and legal assistance to individuals in each country that have been targeted by the Transhumanist Agenda.

WorldCACH also plans to promote the adoption and enforcement Legislation banning the use of these directed energy weapons and advanced remote neural technologies at the international, national, and local levels. Members of the group have already developed a Model Statute banning Transhumanist, Artificial Intelligence, DEW, and remote neural weapons that can be adapted at the international, national and local level.[1]

Magnus Olsson indicated that WorldCACH plans the establishment of a War Crimes Tribunal to prosecute war crimes and crimes against humanity carried out by individuals and organizations against the human population in the course of attempting the Transhumanist Agenda.

Magnus Olsson indicated that the WorldCACH Support Platform and Website is now under construction and would be operational later in the Spring. Mr. Gary Owen, who has been responsible for website construction for major corporations such as Coca Cola in his business career, has now joined World CACH as Vice President to assist the organization achieve its program.

It was Sunday 28th of February 2016, Magnus Olsson was staying at my house in Spain, I had been appointed the Vice President of World CACH 2 days before. We were planning the roll out of the World CACH, deciding the agenda of the organisation, we had a great day on the Saturday, we appointed the technical director, spoke to one of our legal team Alfred Lambremont Webre, he’s the guy that won the war crimes tribunal against Tony Blair and George Bush. We explained that what we wanted to do with World CACH was to set up a Global Intelligence Service that acts for the people against the Governments and security services that no longer represent the people, and take the Masons who have infiltrated all levels of the government and security Services to the war crimes tribunal for genocide and racketeering against the population of earth. He thought both ideas were sensational and invited us to go on his show the following day, which would go out to 250,000 people.

On the Sunday, I started hearing the high pitched noise again in my ear I had not heard it for a few days, since Magnus arrived, and all of a sudden it was back along with the voice to skull. We were to meet for lunch with some people and later talk on Skype with William Binney and then do the show with Alfred where we would break the news to the world about what we were doing. It was only 30 minutes to the lunch meeting and I had heard nothing from Magnus, so I went down to the apartment he was staying in below my house. I knocked on the door and he answered saying he needed medical help, he was in a terrible state. He was physically shacking none stop, and his face was bright red with a high temperature.

After some phone calls we decided to go to the emergency Chemist and get some pain killers and antibiotics as it looked like a virus. The Chemist said we should go to the emergency doctors in the town, by this time I was having to support Magnus while he walked, he was on the verge of passing out none stop.

Four doctors in the emergency room at Torrox looked at him and did all the tests they could and found nothing wrong. But they agreed something was wrong, so we were dispatched to the main hospital in Valez. I arrived at the emergency entrance, Magnus was no longer able to walk, they put him in a wheel chair. He was fading in and out and incoherent. After 2 hours we got to see a very proficient doctor, he was very thorough. Magnus had come round a little after drinking two litres of cold water. I thought the worst was over, Magnus was dispatched for X-rays and 12 blood tests, we did the X-rays first, no problems, then we went to do the blood tests, half way through taking the blood, they took a lot of blood, about 6 tubes, all of a sudden Magnus took a severe turn for the worse, it started by Magnus telling me that he was going to pass out. I tried to explain this to the Spanish nurse. Then he went as white as snow, all over, his face was pure porcelain white and I noticed that his hands were the same. I was instructed by the nurse to wave his hat in front of his face to try and revive him, his eyes rolled back into his head and you could only see white eyes and a white face it was shocking. By this time the nurse was in a sheer panic and the doctor that had seen him was called.

Before the doctor could arrive, Magnus started to have muscle spasms all over his body, they started on his spine, and spread all over, he was put on a gurney and was contorted and jerking all over the place with his eyes rolled back in his head. It was clear he would die of a heart attack if they did not stop it, they pressed the emergency button and doctors came from everywhere, he was wheeled at speed to the ICU Critical Emergency ward. They stripped of his cloths and by now there was a dozen people trying to figure out what was wrong.

I heard the original doctor tell the others that Magnus was working with CIA whistle blowers, we had explained a bit about the organisation to the doctor during the initial examination. They dismissed it and moved on, they could find nothing wrong. They injected him with Diazepam a strong muscle relaxant. He was in critical for two hours, during the first part I took a picture, I had taken several others, so I could put them on the World CACH facebook site later.

The last photo I took one of the doctors went crazy and threatened me to take no pictures and if any of the pictures I had taken were made public I would be charged by the police. This escalated and security arrived, one more sensible doctor said would you be OK to delete them, as you’re not allowed to take photos in a Spanish hospital. There were no signs saying you couldn’t.

I agreed to delete them rather than be arrested, I was taken to the public waiting room, three hours went by. A man arrived and told me I could visit Magnus, I was taken through, he was looking better but had an oxygen mask on, and was drained. I was told that in a few hours provided he remained stable he could leave, he was put on an intravenous antibiotic and saline drip. They dosed him up with the anti-biotics and gave me a prescription for a weeks long course and some diazepam in case the spasms started again.

After 7 hours in there we left, Magnus was back but very weak. The doctors told me that every test they did showed nothing, everything was exactly normal through the whole process. They agreed something was wrong but they did not know what it was. The whole day I had a strong high pitched noise whistling in my ear that is part of the Gangstaklking they are perpetrating on people now.

You have to ask yourself about the coincidences involved.

1/ Magnus and I were not being attacked like normal until we decided to Form a Global Intelligence Service for the people against the governments. Then we were both attacked.

2/ Nothing was found to be wrong with Magnus at all.

3/ That day we were to go on video and announce the plan to the TI world.

4/ We were making significant progress on the roll out of World CACH, talking to the leaders around the world of the individual country CACHs. Appointing the technical director. Getting the war tribunals accepted by a judge.

On the way home I started to wonder if we could not get the images back from the camera so I asked a young tech guy Alex Axon to see if it was possible, and a few hours later he had recovered three images and all the thumb nails. They were a bit degraded but we now have the images. 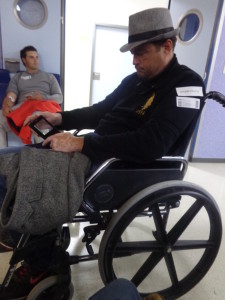 Magnus when he came round a bit