NOTE: This news update begins with an exclusive interview between Melanie Vritschan & Felipe Silva Moldes in a Belgian psychiatric prison facility, with Felipe telling his own version of events of how he has been railroaded and unlawfully imprisoned for 20+ months after contacting his Belgian Member of Parliament at her virtual online office on Facebook.

Former Belgian MP Laurant Louis, a supporter of Melanie Vritschan’s work, advised her to send a January 7, 2016 email attempting offering to meet with MP Meyrem Almaci and see if an amicable resolution could be reached that would result in the release from 20 months of Felipe Silva Moldes false imprisonment, Moldes had been told by his first lawyer he should be “out in 2 weeks.” At the trial, the prosecutor and judge railroaded Felipe into an indefinite incarceration, clearly unlawful under the EU human rights legislation.

Melanie Vritschan ordered to May 19, 2016 Police interrogation without a Lawyer

In mid-March & April 2016, as part of her continuing duties supporting TIs, Melanie was denied visiting privileges with Felipe after he had been mysteriously transferred from a psychiatric facility to a prison.

On May 2, 2016, MP Meyrem Almaci initiated criminal proceedings against Melanie Vritschan making a series of fraudulent and perjurious allegations, accusing Ms. Vritschan of “stalking, assault, defamation, and damaging her [the MP’s honor]”

NewsInsideOut.com has concluded that the timing of MP Meyrem Almaci’s criminal complaint and her access to apparently confidential prison and psychiatric information regarding the denial of Melanie Vritschan’s visit appears reasonably related to an attempt to take down ICATOR as an effective Belgian and EU citizen’s organization, drawing the MP’s abuse of official authority in this matter further into question.

You will be interrogated concerning the following facts :

spreading of evil rumours about a person – “eerroof” :

damaging his or her honour).

You cannot be compelled to accuse yourself.

You may answer the questions or keep silent.

You have a right to consult a lawyer previously.

You are not deprived of your liberty for the moment. 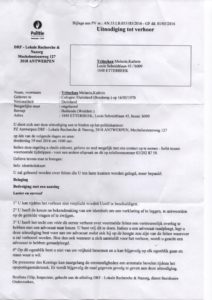 No evidence to substantiate false allegations

NewsInsideOut.com has reviewed substantial written statements, documentary and other prima facie evidence that completely exonerates Melanie Vritschan of ICATOR, EUCACH [European Coalition Against Covert Harassment] and World CACH of any criminal violation. Melanie Vritschan and ICATOR properly following its mandate and charter under Belgian and EU law to visit and support TI targeted individual Felipe Silva Moldes in a psychiatric or prison setting and to reasonably negotiate with Belgian Green Party MP Meyrem Almaci ultimately responsible for his incarceration to secure an early release of Mr. Silva Moldes from his unlawful imprisonment.

Because of the pending legal actions, NewsInsideOut.com cannot release that written and documentary evidence publicly at this time. This evidence will be released as soon after May 19, 2016 as possible upon the speedy resolution of this matter.

Melanie & ICATOR are now forced to pay legal fees for a lawyer to defend her on charges of which she is innocent.

Please help keep Melanie Vritschan & ICATOR doing its mission to protect TIs in Europe! You send a contribution, no matter how small, in one of two ways: