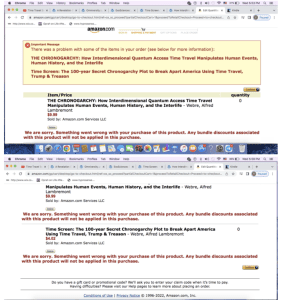 Hi Judge Alfred,
Just to let you know, we’ve been trying to order your books (several times in the past weeks), but Amazon did not complete the purchase order…
Please see attached below: (2 screen shots-Amazon)
Please kindly advise, if there’s another way to order them? (eg. directly from Omniversity?)
Thank you.
Peace and Light,

The word “Chronogarchy” is a neologism that signifies “Those Who Rule Through Time,” or the manipulation of it.  These are wizards standing behind curtains and directing the matrix system to which we all find ourselves subjected.  The exopolitical expert describes the Chronogarchy as, “an interdimensional alliance dedicated to the oppression of the community of human souls, and includes factions in human institutions such as religions, governments, military-intelligence agencies, bloodline families, monarchies, media, medical-pharma, as well as Archonic Spiritual entities, including Fallen Angels, demonic entities, and exophenotypes hostile to the community of human souls such as the Draco Reptilians, Orion Greys, and sentient Artificial Intelligence (AI).”

In The Chronogarchy, Alfred Lambremont Webre delves into the real nature of space, time and inter-dimensionality.  He interviews many of the leading authorities and experiencers in these fields, thereby facilitating an awareness of the people, powers and organizations constituting the network of the Chronogarchy’s existence and helping us to formulate viable defense strategies in the coming years of increasing tribulations.  We also learn of the “good guys” helping us from “behind the scenes,” so to speak, thereby pointing to a light of hope at the end of a long, dark tunnel.

TIMELINES OF THE CHRONOGARCHY – Book Description
Many Heroes on different Organic Timelines expose the AI Artificial Timeline and consign the Chronogarchy, a secret Time Travel Interdimensional government manipulating Human Events, Human History, and the Interlife, to an AI Artificial Intelligence Timeline where it can no longer harm humanity, the Universe, and the Omniverse.

TIMELINES OF THE CHRONOGARCHY
Is a 2021 NaNoWriMo.org AWARD WINNER

CLICK HERE TO BUY “TIMELINES OF THE CHRONOGARCHY” ON UNIVERSEBOOKS.COM NOW

Click to BUY “EMERGENCE OF THE OMNIVERSE” on UniverseBooks.com NOW!

Exclusive! Click to BUY “DIMENSIONAL ECOLOGY OF THE OMNIVERSE” on UniverseBooks.com NOW!

One reviewer of My Journey Landing Heaven on Earth writes:

“ Similar to the two autobiographies mentioned above, in your own autobiography, you have the immense courage to share with the reader both your hardships and your achievements, throughout various phases of your current incarnation; in a candid and original manner. Your autobiography stands apart from theirs because you have written it for the altruistic reason of sharing your current “soul journey”; as a star chart, or road map, to help to inform, educate, empower, enlighten, and expand the consciousness of humanity on Earth.

Click to BUY  “MY JOURNEY LANDING HEAVEN ON EARTH” on UniverseBooks.com NOW!

“Alfred Lambremont Webre’s odyssey into the realm of life in the vast Universe surrounding planet Earth is indeed a fascinating journey if you read it with an open mind…  To turn us in the direction of re-unification with the rest of creation the author is proposing a ‘Decade of Contact’ –  an era of openness, public hearings, publicly funded research, and education about extraterrestrial reality. That could be just the antidote the world needs to end its greeddriven, power-centered madness.”
– Honorable Paul T. Hellyer, Minister of National Defense under Canadian Prime Minister Lester B. Pearson and Deputy Prime Minister of Canada under Prime Minister Pierre Trudeau

“Much of this book rings true. Certainly, our civilization cannot go on as we have.  We will need all the help we can get to lift ourselves out of tyranny, genocide, and ecocide.  So why not reach out toward those who are clearly more wise?”
–Dr. Brian O’Leary, Former NASA Astronaut

The Levesque Cases, a real life legal thriller, exposes the clandestine corruption of courts in the United States and Canada as attorney Alfred Lambremont Webre pursues legal vindication in a series of 26 cases against TIME-WARNER INC, David Rockefeller, then US President George HW Bush, Canadian Prime Minister Brian Mulroney, the Rothschilds, the secret Sanhedrin Anunnaki government, and the Government of Ontario and its Children’s Aid Society against whom Alfred would win a $750 million default judgment, one of the larger in recent Canadian legal history.

Alfred’s client in The Levesque Cases was Pierre Richard Levesque, a former Canadian Custom’s Officer, who in 1973 was abducted up into Interdimensional UFO Spacecraft in a mass abduction with about 150 other members of IAM, the Institute of Applied Metaphysics, a spiritual group based in rural Ontario that the media would mis-characterize as an “Ontario wilderness cult” led by Levesque.

EXCLUSIVE! Click to BUY “THE LEVESQUE CASES” on UniverseBooks.com NOW!

The Age of Cataclysm is a 1973 book co-authored by Alfred Lambremont Webre, JD and Phillip Herman Liss, PhD that integrated parapsychology and modern earth sciences of geology and seismology with biblical and Indigenous prophecies and the Earth changes predictions of American psychic Edgar Cayce (1877-1945), later declared to be the product of a “trickster Interdimensional entity” by author David Wilcock, who also has reported himself Edgar Cayce’s reincarnation.

Alfred’s co-author in The Age of Cataclysm, Prof. Phillip Herman Liss, PhD, was a Professor of Experimental Psychology at Rutgers University, as well as a scholar in parapsychology and the study of Extraterrestrials. Phillip Liss was also a Contactee and Abductee of Interdimensional intelligent entities.

The Age of Cataclysm, written and published as part of the 1973 Watergate turmoil [Watergate refers to a specific entrance to the Jewish Temple in Jerusalem], sets out an analysis of the political assassination of John F. Kennedy, the political duopoly of the 2-party system in the United States. Co-Authors Webre & Liss propose a publicly financed debate-based election system in the US, and a new Constitution more along the lines of a collective Executive chosen by proportional representation, rather than the Monarch-like individual Presidency the US Founders fashioned.

EXCLUSIVE! Click to BUY “THE AGE OF CATACLYSM” on UniverseBooks.com NOW!

I was able to present My 1973 Interdimensional ET Experience which unexpectedly began my Hero’s Journey archetype at a Conference in Yelm, WA in July 2017.  The Interdimensional aspects of the experience are presented here, and the 3D aspects are described in my book

Click to BUY “MY JOURNEY LANDING HEAVEN ON EARTH” on UniverseBooks.com NOW!