You are here: Home / 2020 US Election / Time Travel Secrets Exposed with Alfred Lambremont Webre and Gail of Gaia on Free Range

(1) the Life and Teachings of the historical Jesus, and (2) a 100-year Chronogarchy Plot to break up America using Time Travel, Trump & Treason, as reported in two of Alfred’s new books: 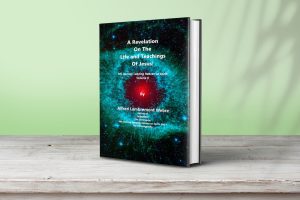 BOOK REVIEW: “This is a most interesting and thought-provoking take on the life of a Jesus. A must-read for anyone with a curious mind!”

A Revelation On The Life and Teachings Of Jesus:

Author Alfred Lambremont Webre has published in “A Revelation On the Life and Teachings of Jesus” a Report on the Chronogarchy’s – DARPA-CIA and the U.S. Government’s – creation of Top Secret Quantum Access Time Travel Video Documentaries Of The Historical Crucifixion And Resurrection Of Joshua ben Joseph, Jesus of Nazareth, made public by the whistleblowing of US Chrononaut Andrew D. Basiago, an eye-witness to the time travel video documentary of Jesus Crucifixion. The publication of this Chronogarchy Top Secret Quantum Access Jesus Project provides direct forensic evidence of the Truth and authenticity of the Synoptic Gospels of Matthew, Mark, Luke and John, and importantly of Part IV of a Fifth Epochal Revelation, The Urantia Book: The Life and Teachings of Jesus, and forms a basis for “A Revelation on the Life and Teachings of Jesus”. The Chronogarchy is “an interdimensional hidden power structure monitoring the time-space of Earth as its domain of influence, operating as a secret government using quantum access Time Travel technologies to carry out its operations and mandates.” 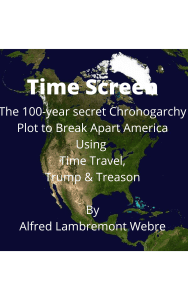 The 100-year Chronogarchy Plot to break up America

In this new book “Time Screen” (2023), futurist Alfred Lambremont Webre exposes an historic and legendary 100-year unlawful secret and deceptive Chronogarchy plot to break up the Constitutional Union of States in America and disassemble the Constitution of the United States of America through quantum access time travel driven covert social engineering, through the political and social persona of Donald J. Trump as a key willing actor, in violation of Article III(3) of the US Constitution prohibiting treason, “levying war against the United States”.

With evidence characterizing Ingersoll Lockwood, an 1890s member of the NY Bar, and “an American political writer, lawyer and novelist Chronogarchy, as an “embedded local handler” of time travel operations for the Chronogarchy, the new book “Time Screen” demonstrates how the Chronogarchy, through Ingersoll Lockwood’s two books – ‘Baron Trump’s Marvelous Underground Journey’ and “1900, Or The Last President” – intentionally implanted and published key memes, tropes, and time travel plot deflectors related to Donald J. Trump’s central historical role as a covert Russian Agent of Influence in a “100-year plot to break up America through Time Travel, Trump, and Treason.”

Alfred recounts his 1971 meeting with the Top Secret DARPA CIA time travel unit in 1971 after DARPA-CIA time-travelled his landmark book Exopolitics from 2005 back to 1971 using classified quantum access technologies. Continuing the disclosure narrative, Alfred reveals a stunning January 1977 staff meeting with Stanford Research Institute futurist Director Willis Harmon who at the time had a 50-year Alternative Futures Study with the US Central Intelligence Agency, which had just time-traveled Alfred’s books back from 2005 back to 1971. Willis Harmon took Alfred, who had just joined the SRI futurist staff aside, and told him of the future Balkanization of the USA, “Alfred in the Future, the United States of America will break up into many regions.” U.S. Presidents George H.W. Bush, George W. Bush, Bill Clinton, Barack Obama, Donald J. Trump, and Joseph Robinette Biden would be pre-identified and groomed on a common consensual policy by the DARPA-CIA Chronogarchy secret Presidential Time Travel preidentification program.

Time Screen documents a 40-year penetration of Russian intelligence into the “Real Donald Trump” becoming a deep cover Soviet asset and Trump Tower becoming a known base of operations for the “Russian Mafia”.  With Russian intelligence asset “Donald Trump’s” winning of the U.S. Presidency in November 2016, as preidentified by DARPA-CIA time travel, a covert Russian spy became US President, accounting for the determination of FBI, CIA to remove and block Trump through first the “Russian dossier”, then two impeachments, a “managed” 2020 US Presidential election loss, the Congressional January 6, 2021 Select Committee, the 8.8.2022 “Lion’s Gate” FBI Search and Seizure of Trump’s headquarters at Mar A Lago, on Espionage grounds.

The new book focuses on structural signs of a possible Chronogarchy time travel manufactured breaking up of the United States of America, including the 2022 adoption by the Texas State Republican Party of a plank calling for the secession of Texas from the United States, and a recent poll showing that a plurality of Trump voters in Trump leaning states favor secession from the Unites States of America – “About 33% of Trump voters in so-called red states say they’d personally fare better if their state ‘became an independent country.’”

With a publication date of July 4, 2023, Alfred’s new book presents solutions for the body politic of the United States of America so that the positive American Experiment does not fall victim to covert, time travel predicted projections of the Chronogarchy.

About Author Alfred Lambremont Webre – Futurist Alfred Lambremont Webre is a change agent whose principal activities are (1) founding the science of Exopolitics through his 2000 book Exopolitics, (2) discovery of the Omniverse 2014 as the 3rd major cosmological body after the Universe and the Multiverse through which humanity understands the cosmos, as set out in his 2014 book DEO: Dimensional Ecology of the Omniverse, (3) promulgation of the Positive Future Equation [PFE] though which humans co-create a positive future on planet Earth, published in his 2017 book My Journey Landing Heaven on Earth, (4) public exposé in his book Chronogarchy, of an interdimensional hidden power structure monitoring the time-space of Earth as its domain of influence, and operating as a secret government using quantum access Time Travel technologies to carry out its operations and mandates, and (5) A Revelation on the Life and Teachings of Jesus (2022)