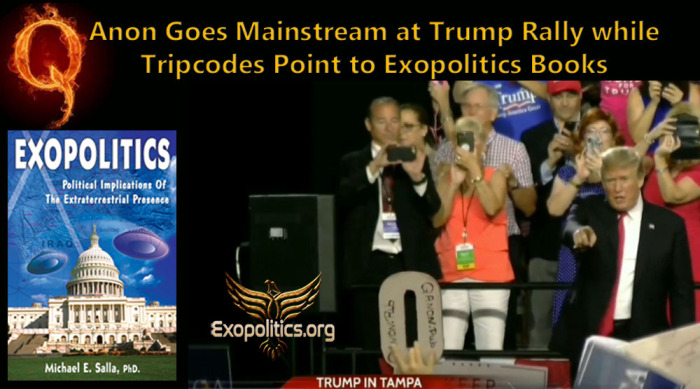 Vancouver, British Columbia, Canada – At the end of this article a link to a recent article by Michael Salla, PhD of ExopoliticsInstitute.org in which Dr. Salla writes that QAnon is signaling his (Michael Salla’s) Exopolitics books.

IMHO Michael Salla’s hypothesis reinforces the validity of QAnon’s identity as an Intelligence-Agency- created source, only not in a way that most followers of QAnon may think.

The reason for my alternative conclusion about the authenticity of QAnon as a genuine, Patriot & democratically-oriented Source is that our research shows that Exopolitics researcher Michael Salla as a deep cover ASIO [Australian CIA asset] who was seconded as a Faculty member onto a Center at American University run by Dr. Abdul Aziz Said of American University in Washington DC, a known CIA infiltrated institution.

While an American University Faculty member at Dr. Said’s Center, Michael Salla, acting on orders from ASIO-CIA covert handlers, academically plaigarized my online book EXOPOLITICS shortly after the years 2000-2001 with deceptive false attribution to create his own “original Exopolitics” brand & articles separate from mine, which had been online since the year 2000 at my website www.exopolitics.com.

Michael Salla, in an act of international spycraft as well as copyright infringement of my Exopolitics.com then placed his texts online at a parallel deceptive website www.exopolitics.org, a site he created to further his spycraft infiltration into the Exopolitics movement, as he was clandestinely tasked to do by his handlers at ASIO-CIA.

Please note that CIA-DARPA had time traveled my textbook Exopolitics: Politics, Government & Law in the Universe from 2005 to 1971 where they had been witnessed by US Chrononaut Andrew D. Basiago.

Following Dr. Michael Salla’s academically plagiarized launching of Exopolitics.org from my 2000 website Exopolitics.com using academically deceptive attribution [I have taught at Yale & the Univ. of Texas and know rigorous academic citation rules well], Dr. Michael Salla then published an academically deceptive Letter to the Editor in the Washington Post under his American University faculty position at Dr. Said’s Center stating that President Dwight Eisenhower had met with Extraterrestrials at a US Air Force Base while POTUS. Dr. Salla’s Letter to the Editor to the Washington post was academically deceptive in that it was the centerpiece of an intelligence agency ruse or psyop to “sheep-dip Michael Salla from Faculty at a CIA University [American University] to a grasstoots position within Exopolitics, something Alfred Lambremont Webre – the intended intelligence agency Psyop Target – had earned through decades of hard work following a 1973 Extraterrestrial Adduction.

SEE: “The UFO/ET Abductions of Jimmy Carter, Alfred Lambremont Webre & Andrew D. Basiago: A Path to A Positive Future for Humanity in Our Galaxy”, As presented on July 30, 2017 at the First Annual UFO Fest & Symposium, Yelm, WA
WATCH ON ExopoliticsTV: https://youtu.be/DnwFGIPCf60
Now the full hidden history behind 1980 October surprise by the shadow government & Deep State can finally be revealed
A Path to A Positive Future for Earth Humanity in Our Galaxy
ACCESS FULL ARTICLES
https://newsinsideout.com/2017/09/ufoet-abductions-jimmy-carter-alfred-lambremont-webre-andrew-d-basiago/
EXOPOLITICS.COM
http://exopolitics.blogs.com/exopolitics/2017/09/the-ufoet-abductions-of-jimmy-carter-alfred-lambremont-webre-andrew-d-basiago.html

As a result of the staged psyop “firing” by Dr. Said of Michael Salla, Salla himself receives a great deal of instant notoriety and personal support in the Exopolitical community. Dr. Salla then is welcomed into a situation into the Exopolitical UFO community at Kona, Big Island, Hawaii, where he moves from Washington, DC

Spies infiltration in the Exopolitics-UFO Movement is as old as the Movement itself, and the case of ASIO-CIA cutout Michael Salla is no different.

The key difference in the case of ASIO-CIA cutout Dr. Michael Salla is that, unbeknownst to Michael Salla, Exopolitics founder Alfred Lambremont Webre in 1982-83 had originally gotten to know Dr. Abdul Aziz Said, the director of the Center at which Michael Salla was to work almost 20 years later, when Alfred was a Futurist in residence at Greystone, a Washington DC Center operated by fellow Futurist Barbara Marx Hubbard out of Justice Charles Evans Hughes former mansion in Rock CreeK Park, Washington DC.

In 1982-83, Dr. Said was a friend of the Greystone Center and attended functions there regularly along with Col Jim Channon of the First Earth Battalion who also became Alfred’s friend. Dr. Said and Alfred Lambremont Webre would discuss the evidence for Extraterrestrials openly and freely.

Thus it was totally implausible that almost 20 years later, in 2000-2002, Dr. Said, who 20 years earlier had discussed ETs and UFOs openly and supportively, would in all integrity engage in a noisy Public firing of Michael Salla for publishing an article in the Washington Post about “Ike meeting with Extraterrestrials”.

Rather, as the Extraterrestrial & UFO-savvy director of a CIA-conntected Center at American University, Dr. Said would most reasonably have clandestinely collaborated with Michael Salla in creating an intentional psyop whereby Salla could (1) appear to be fired for disclosing in the Washington Post that Ike met with ETs while POTUS (2) thus gaining Instant maximum street creds with the Exopolitical Community and (3) be “sheep-dipped from being an ASIO cutout seconded to CIA at American University to being a black budget cutout in the Exopolitics Community who would (4) capture all major Exopolitics researchers into a Mom & Play online games on the friv games site with the whole family. Only the best online friv games are presented on this mega portal. Pop-run ExopoliticsInstitute.org, and (5) become the Go-To public debriefer and publisher for later major MILABS defectors like Corey Goode, who became Salla’s exclusive Exopolitical Source on the Blue Avians and other CIA Disclosure False Memes.

Your comments, observations, and positive initiatives to rid the Exopolitcal community of active, onging infiltration by controlled assets of the US, Australian, and other intelligence agencies are most welcome at exopolitics@exopolitics.com.